So I’ve been considering changing my adjective, and no this isn’t an April Fool’s joke … 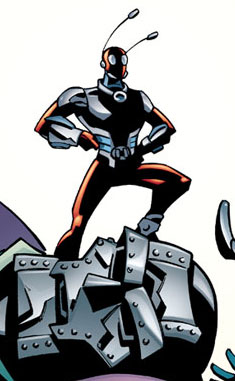 Those of you who listen to either THE UNIQUE GEEK or VIEWS FROM THE LONGBOX podcasts know that on-air I go by “The Irredeemable Shag”.  It started off as a joke honoring the then-current Marvel comic book series The Irredeemable Ant-Man.  After reading a few issues of this comic, I absolutely fell in love with the book.  This new Ant-Man (Eric O’Grady) was a complete jerk, liar, cheater, womanizer, all-around bad person, but still managed to be interesting to read about.  I guess you might compare him to J.R. Ewing from Dallas.  He was the jerk you loved to hate.  I mean, Eric O’Grady accidentally causes the death of his best friend, Chris.  Then a few weeks later, Eric tries to seduce Chris’ girlfriend literally on top of Chris’ grave!  This was a bad, bad person.  He truly lived up to the adjective “Irredeemable”.

There were several things that attracted me to this comic.  First was the Phil Hester/Ande Parks art.  I really liked them on Green Arrow and Nightwing, so it was nice to see them here.  They did some really interesting things with panel designs on this book.  The second attractor for me was the writer Robert Kirkman.  While I hadn’t read any of his other books, I’d been hearing his name more and more.  Third was the fact that this was an Ant-Man book.  I’ve always had an interest in comics about Ant-Man and/or the Atom (no “tiny” jokes please).  Finally, I was just totally wowed that Marvel was willing to turn one of their major characters into such a jackass.  Other than a few exceptions (Guy Gardner and Lobo), I can’t think of a monthly superhero comic that featured a character this far south of nice-guy-ville.  And each month, Kirkman ratcheted up the irredeemability of Eric.  I just loved it more and more every month.

While I not as far gone as Eric O’Grady, I do enjoy playing the antagonist on the podcasts.  So I felt the adjective fit.  When The Irredeemable Ant-Man series was cancelled, I swore to carry on the adjective in honor of this series taken before it’s time.

I started thinking the other day… should I continue with being “The Irredeemable Shag”?  Should I just call myself “Shag” on the podcasts?  Or should I pick a new adjective?

Well… I didn’t want to just go with “Shag”.  I like having an adjective with my name.  Recording a podcast is basically like recording a radio show.  And usually the radio jocks have a corny nickname to help describe their on-air character (i.e. Bird Man, Wolf Man, etc).  Additionally, I’ve listened to a bunch of podcasts where afterwards you can’t remember peoples names at all.  But people often remember the nicknames of radio jocks.  So there must be something there to the whole on-air nickname thing.  The on-air character I portray on these podcasts is like me in real life, but ratcheted up a bit.  So having a nickname seems to make sense.  On the podcasts, I mainly talk about comics.  And nothing evokes the thought of comics quicker than a crazy adjective (Uncanny, Amazing, Fantastic, etc).  I thought on this for a while and decided to take “The Bombastic Shag” out for a spin.  “The Bombastic Shag”… has a nice ring to it.  Let’s take a look…

Here are the definitions of “Irredeemable” and “Bombastic” for comparison (thanks to Dictionary.com).

ir·re·deem·a·ble
–adjective
1. not redeemable; incapable of being bought back or paid off.
2. irremediable; irreparable; hopeless.
3. beyond redemption; irreclaimable.
4. (of paper money) not convertible into gold or silver.

—Synonyms pompous, grandiloquent, turgid, florid, grandiose. Bombastic, pretentious, verbose all describe a use or a user of language more elaborate than is justified by or appropriate to the content being expressed. Bombastic suggests language with a theatricality or staginess of style far too powerful or declamatory for the meaning or sentiment being expressed: a bombastic sermon on the evils of cardplaying. Pretentious refers specifically to language that is purposely inflated in an effort to impress: a pretentious essay designed to demonstrate one’s sophistication. Verbose characterizes utterances or speakers that use more words than necessary to express an idea: a verbose speech, speaker.

For being “Irredeemable” on the podcasts, I like this definition: beyond redemption.  It also means that no can turn me in for a $0.10 cash deposit in Michigan.

For being “Bombastic” on the podcasts, I like this definition: suggests language with a theatricality or staginess of style far too powerful or declamatory for the meaning or sentiment being expressed.  Sounds very Stan Lee.

Both work pretty well.  “Irredeemable” lets me get away with saying really mean things about other people and stuff.  After all, the adjective tells you upfront that I’m beyond redemption.  “Bombastic” lets me speak boldly and authoritatively, while in all honesty I’m not saying anything important in the scheme of the universe (like comics or Doctor Who).

Hmmmm… tough decision.  What to do… what to do…

Okay, I’ve decided.  I know you are on the edge of your seat….

I will remain THE IRREDEEMABLE SHAG!  The reason why?  So I can say horrible, horrible things and fall back on the forewarning adjective.  🙂

By the way, did I mention that no one likes you?

Oh yeah, you smell funny too.

4 thoughts on “Irredeemable no more…?”