On Monday I featured quite a few comic book related t-shirts from my closet.  Today I’m finishing up the tour of my wardrobe by showing off my DC comics shirts.  Please feel free to share any of your favorite t-shirts you own either by commenting or via e-mail! 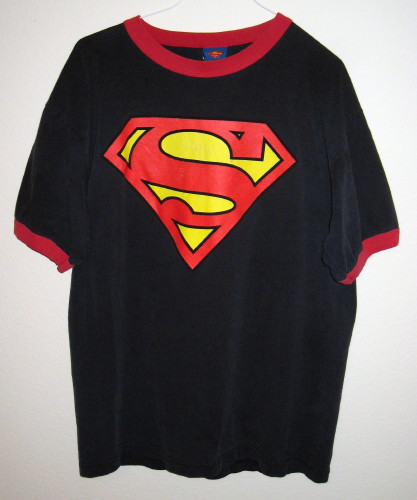 A great Superman t-shirt given to me by my family a couple years ago.  I really like that the “S” symbol is large.  I strongly believe the “S” on a Superman shirt should stretch across the entire chest horizontally.  Additionally, I like the “ringer” look of this shirt.  A “ringer” t-shirt typically features the jersey shirt fabric in one color, but the ribbing used for the collar and the sleeve bands are of a contrasting color.  I wear this one a lot. 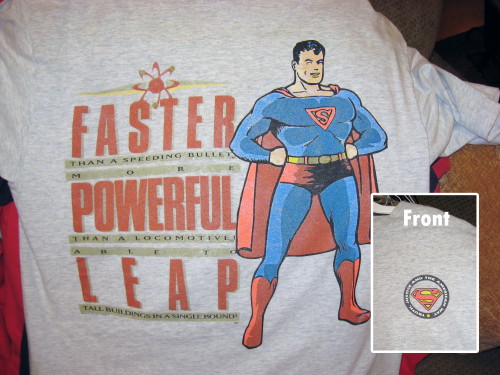 A fun classic Superman style shirt I picked up in the 1990’s. I love the squinty 1940’s Superman!  The primary image above is the back of the shirt with the insert being the front left hand side. 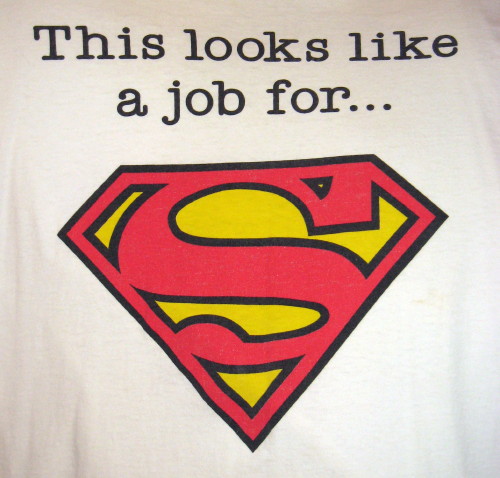 A present from my friend Ed back in the 1990’s.  This shirt came in a cool telephone booth shaped box. 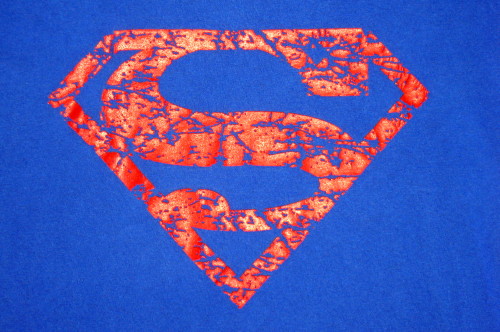 Another gift from the family.  Obviously this one was pre-stressed. 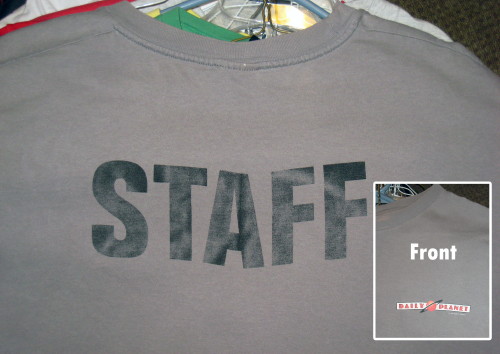 This was a clever idea for a shirt.  The primary image above is the back of the shirt, with the insert being the front left hand side.  I liked the idea of having a Daily Planet staff shirt.  The fading on the word “Staff” happened after one wash.  I was kind of bummed, but it sort of makes it look cooler. 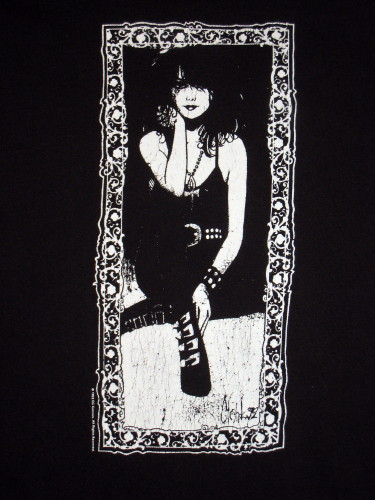 Okay, what comic book reader in the 1990’s didn’t have a crush on Death?  I’m not talking Thanos-style, but the Death character from the Sandman comic.  She was absolutely adorable.  This 1993 shirt was the first Death shirt and was drawn by Chris Bachalo.  It’s still my favorite Death shirt.  The fading/stress on this shirt is genuine; I wore it a lot. 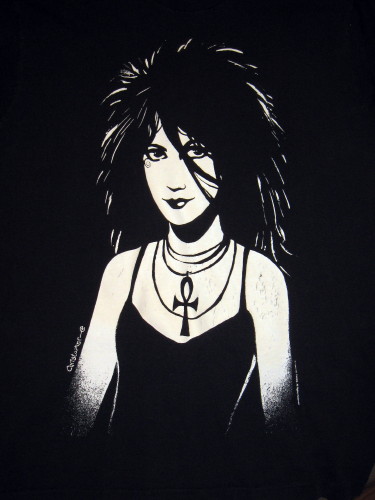 Here is another Death shirt.  I believe this one was done by Chris Bachalo also. 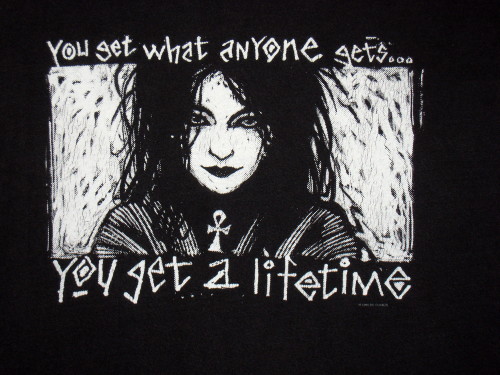 A great Death shirt from 1995 featuring a line from her first appearance.  You can clearly see the Bjork influence on the artwork at the time. 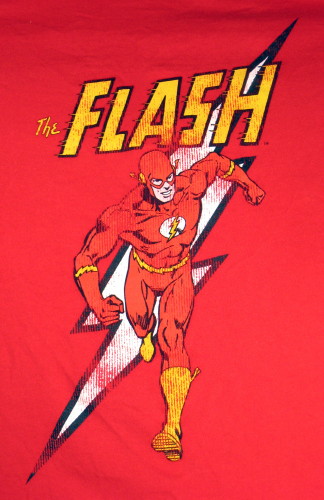 I got this Barry Allen Flash t-shirt from Target just a few months ago.  This was a pre-stressed item that looked so classic I had to get it.  Interestingly enough, if Target had waited just a few more months this wouldn’t have been “classic”, it would have been “current”. 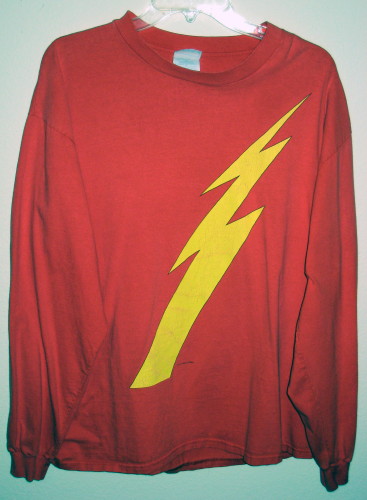 I got this shirt in the 1990’s specifically because I thought it was awesome they made a Jay Garrick Flash t-shirt.  Additionally, this is the only comic book t-shirt I own that’s long sleeve. 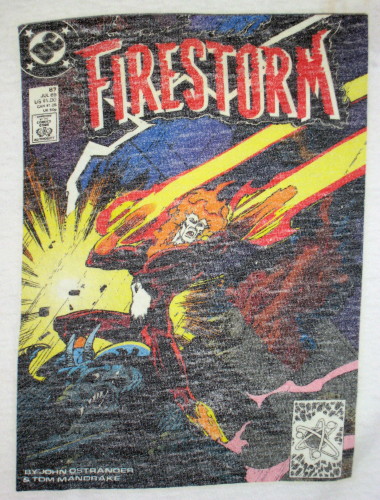 A very thoughtful present from my friend Ed.  DC has never produced a t-shirt that just focuses on Firestorm, so Ed made me one!  The image is taken from a cover during Firestorm’s elemental period.  You can see the fading on this shirt is pretty severe.  I wore the heck out of it back in the mid-1990s.  Once it started fading, it became a frequent nightshirt.

Another present from a friend.  This one was a gift a couple years ago from my old college roommate, Serv.  You can see the image is a classic version of Aquaman; early 1970’s Super Friends era.  I really like the “ringer” look on this one along with the pre-faded image. 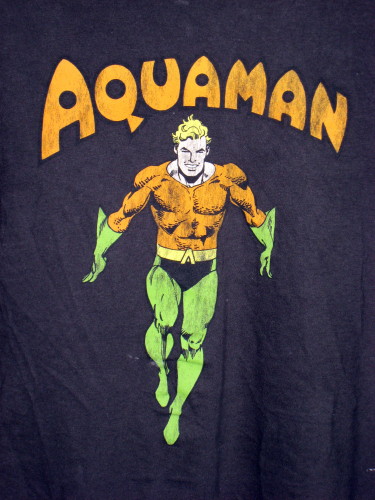 Another great classic Aquaman image; this time from the late-1970’s/early 1980’s.  The image has a little bit of pre-faded effect which suits it well.  This particular shirt was also given to me by Serv last year.  So do you think by giving me all these Aquaman shirts that Serv is trying to tell me he’s gay for me? 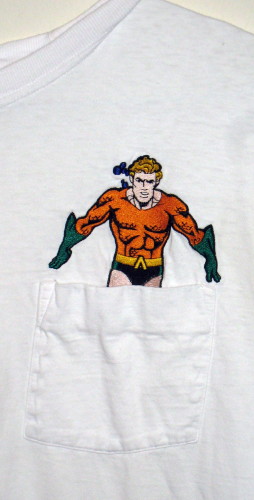 A white pocket t-shirt from the WB store with an embroidered Aquaman swimming out of the pocket.  I got this in the mid-1990s.  Fun! 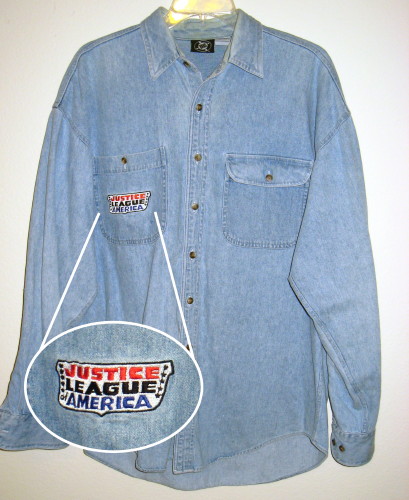 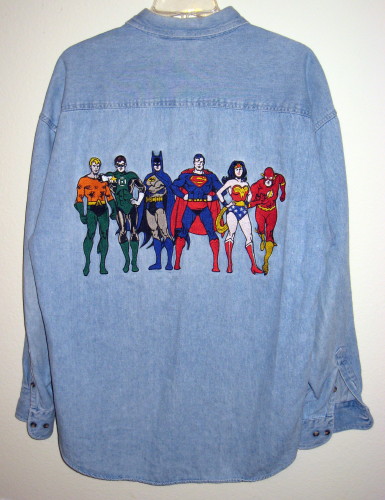 Not truly a T-SHIRT, but still a comic book related SHIRT.  This embroidered denim shirt came from the WB store in the mid-1990s and is all kinds of awesome.  The top image is obviously the front, with the bottom image being the back.  Interesting observation, Aquaman and Green Lantern look all buddy-buddy here.  However, did Green Lantern freak out when Aquaman was killed (like he did when Martian Manhunter was killed)?  Nope.  I’m not even sure Hal has realized that Arthur kicked the bucket.  Well… Hal will know for sure soon enough.  C’mon “Blackest Night”! 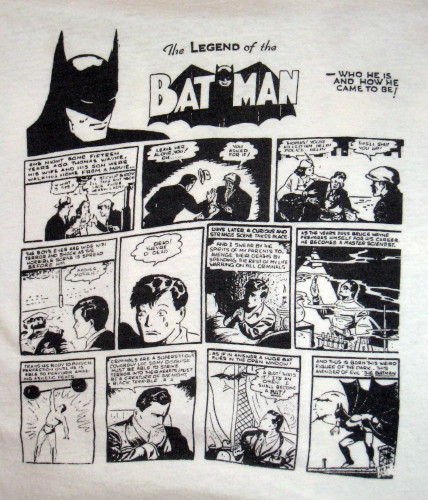 This is a really fun take on superhero t-shirts.  This shirt presents the one-page origin of Batman from the earliest days of Detective Comics.  If I remember correctly, I got this shirt in a record shop in Atlanta in the mid-1990s. 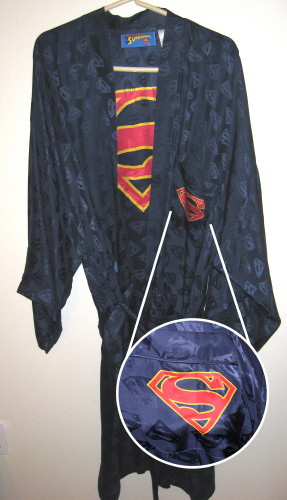 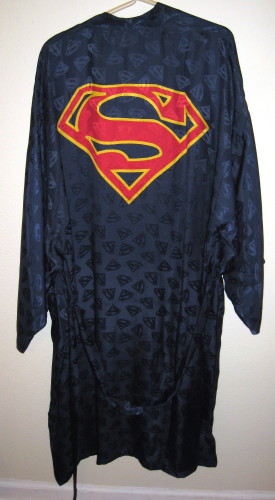 This is another unusual item (and I know, not a t-shirt).  It’s a silk robe featuring the Superman “S” symbol.  If you look closely, you can see small versions of the symbol all over the fabric.  Then there is the obvious red “S” symbol on the front pocket and backside.  The robe is really pretty to look at, but somehow a silk robe just doesn’t scream manly to me.  Especially Super-manly.  Needless to say I haven’t worn it much.  But on my wife it looks hot!

Well there you go, a brief look into Shag’s closet.  Don’t forget, share your favorite comic book t-shirts if you’d like!