I recently recorded an episode of Views from the Longbox with Michael Bailey in which we covered the 1988 story “Batman: Death in the Family“.  The episode should be available for download within in a few weeks.  “Death in the Family” is the story in which the second Robin, Jason Todd, was murdered by the Joker.  … Sorry if I spoiled anything for you there.  You should probably be caught up enough in your reading to know about that. If not, my bad. I mean, it only came out 20 years ago.

So I’m only two issues into my new reading assignment, but I just gotta rave about “Batman: Year Three”  — well, at least Parts 1 & 2.  Wow!  What great comics!  First off, check out the amazing cover below for Part 1.  George Perez did an outstanding job depicting the death of Dick Grayson’s parents, while wrapping other story elements around the image.  Just a truly iconic cover. 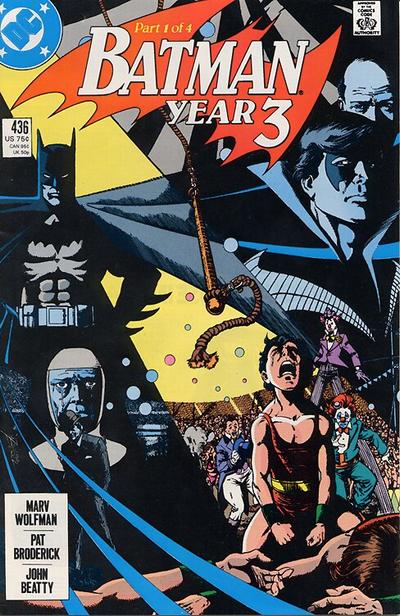 The inside isn’t disappointing either.  Pat Broderick’s interior art is impressive!  His facial expressions always communicate exactly what the character is feeling.  He is also a master of creating a sense of motion in his work.  Finally, in this comic there are typically 6 panels per page (some with as many as 10 panels).  This is something you just don’t see in modern comics any more.  The panel per page count is WAY down nowadays.

The reoccurring theme throughout “Batman: Year Three” is that Batman is over the edge.  Just months before, Batgirl was crippled by the Joker.  Shortly after that, Robin was murdered.  Batman is mentally traumatized and descending into a brutal existence.  Despite a long-standing strained parental relationship, Dick Grayson returns to try and help Batman mentally recover.  This provides the framework to tell how Dick Grayson came to live with Bruce Wayne and eventually became Robin.

I won’t go into too much detail here because we’re going to review these stories on an upcoming “Views from the Longbox” podcast.  However, I have to compliment Marv Wolfman for putting together a phenomenal story.  It’s structured incredibly well with three intertwining plots — Batman trying to stop an organized crime killing spree, Dick Grayson trying to reach Batman emotionally, and Alfred doing what he feels is right to protect his loved ones.

Each issue is packed with story and you walk away feeling like your time was definitely worth it.  This is Marv Wolfman at the top of his game.  It’s a real shame “Batman: Year Three” has never been collected into a trade paperback.  I guess it probably never will be now, since the more recent “Batman: Dark Victory” provides a slightly different origin for Dick Grayson’s Robin.

If you don’t own these issues, you can pick them up dirt cheap at Mile High Comics right now.  “Batman: Year Three” runs through  Batman issues #436-#439.  Seriously, at the time of this writing you can buy all four issues from Mile High for a combined total of $3.05 plus shipping.  If you also want to pick up “Batman: A Lonely Place of Dying”, that story runs through Batman issues #440-442, and New Titans issues #60-61.  That story will set you back a whopping $5.20 plus shipping (at the time of this writing).  It’s a great time to buy back issues if you are interested.

If you already own these issues, I highly recommend you dig them out and re-read them.  I think you’ll  find a satisfying story that offers a quality and quantity that seems to be lacking in most comics nowadays.