‘Secret Wars II’ Collected – This is So Wrong

The first comic I bought as a collector was Secret Wars issue #2 back in sixth grade.  Some of you may recall I wrote a post about this experience back in June.  Before I begin my rant, I want to be sure you understand that Secret Wars issue #2 should in no way to be confused with a completely separate nine-issue comic book limited series entitled Secret Wars II.  That’s important.  Don’t forget that. 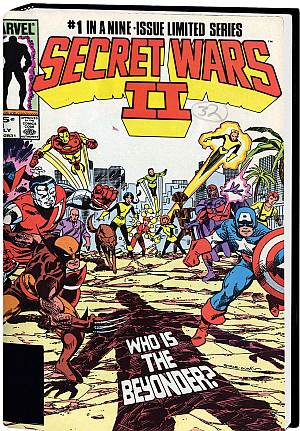 The original Secret Wars 12-issue limited series was a solid story and a huge success.  So of course, it spawned a sequel.  Secret Wars II was about the entity that instigated the first Secret Wars, the Beyonder.  The Beyonder visits Earth in search of enlightenment and inevitably comes into conflict with Earth’s superheroes and the cosmic entities that exist in the Marvel Universe.  It’s pretty much universally accepted by fans that Secret Wars II was a poorly executed and poorly written series.

Marvel Comics has announced that in February they will release a new hardcover — Secret Wars II Omnibus.  This omnibus will collect all nine issues of the Secret Wars II mini-series, as well as several of the related crossovers.  All told it will reprint 46 comics, be 1168 pages, and retail for $99.99.

Okay, hopefully you’ve taken a second for all that to sink in.  So I can now say…

Are you serious?  Secret Wars II for $100?  Are they out of their friggin’ minds?  Seriously, dude!  This is an abysmal comic.  In fact, you can pick up almost every issue of Secret Wars II in your local comic book shop for less than $1 an issue (some of the crossovers can be more expensive). 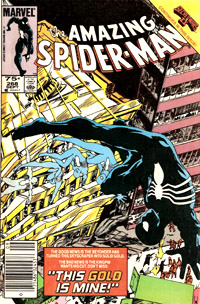 Some comics that tied-in to Secret Wars II really benefited from the connection.  My personal favorites were Web of Spider-Man #6 and Amazing Spider-Man #268.  These comics form a two-part story in which Spider-Man has to deal with the collapse of the skyscraper that the Beyonder turned into gold.  While the Beyonder makes no appearance in these issues, the story does spin directly out of Secret Wars II issue #2.  There are some great moments dealing with moral issues in this one.  The government secures the building made of gold because it’s worried about what the influx of this quantity of gold could do to the world economy.  Spider-Man witnesses the Kingpin receiving pay-offs from government agents, while he himself is shot at for trying to help people.  So in a moment of frustration, Spider-Man takes a golden notebook from the skyscraper.  The moral issue becomes whether Spider-Man has the right to take the gold as compensation (especially since the Kingpin is making a profit from the government).  It’s a well written story by Danny Fingeroth and Tom DeFalco, and is a great example of what classic Spider-Man stories should be like.

A few others worth mentioning are:

There are some other good Secret Wars II crossovers (like the Uncanny X-Men books), but the ones above happen to be favorites.  All of which you can pick up online for a handful of dollars right now.

If you are considering ordering the Secret Wars II omnibus, ask yourself… why on Earth would I pay $100 to read a few good comics and a whole bunch of crappy ones?!?!?!   I recommend you just pick a comic shop (brick-and-mortar or online) and purchase a few of the good crossovers from their back issue selection.  Save your wallet and your brain the pain of the omnibus.  Remember, friends don’t let friends buy bad comics.

12 thoughts on “‘Secret Wars II’ Collected – This is So Wrong”