While at DragonCon this year, I commissioned a sketch from artist David Wong.  I’d seen some of his work in the past at DragonCon and was impressed.  He doesn’t draw comics for the primary publishers, but he appears to make his living off his art.

I just received my commission in the mail.  The image below is Blue Devil (in his classic gear) versus Doctor Fate (with his signature ankh shield).  Both are in my ‘top five favorite characters of all time’ and both happen to be magical, so I thought an image together would make sense. 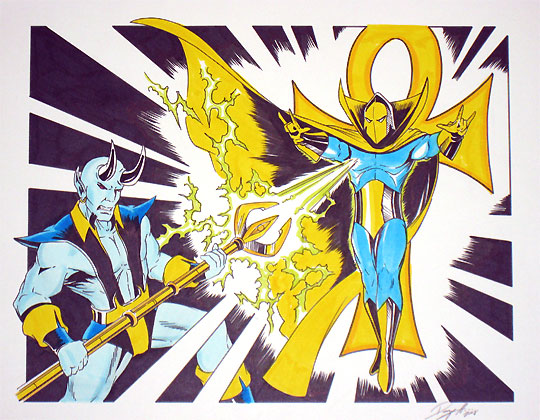 When I asked for these two characters I didn’t think about the fact that the color scheme would be a bit limited.  Both characters primary colors are blue and gold.  It’s a happy accident that having only two main colors created a nice sense of balance in the sketch.  Also, I feel the artist did a good job using various blues and orange highlights to bring out texture and shading.  Nicely done.

I think the sketch came off pretty well.  The only part I’m slightly disappointed in is Blue Devil’s face.  It just doesn’t seem quite right.  Other than that it looks pretty good.  Doctor Fate looks great!  In an ideal world, Blue Devil would have been sketched by Paris Cullins and Doctor Fate would have been sketched by Walt Simonson.  One can dream…

Next year I gotta figure out a way to get a sketch of Firestorm, Aquaman, and Flash all together.  Hmmm… if only George Perez was coming next year.