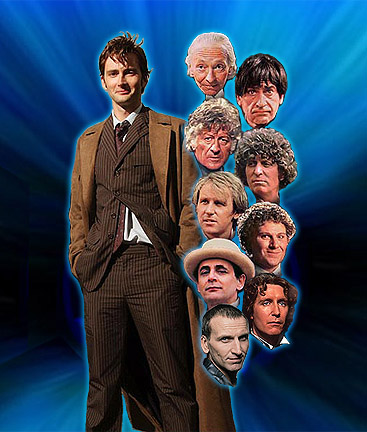 Today marks the 45th anniversary of the airing of the very first Doctor Who episode.  It was Saturday, November 23, 1963 at 5:15pm GMT when an unheard of children’s program appeared on BBC television.  It featured two school teachers, an oddball student, and a grumpy old man.  Who knew this humble beginning would lead to 45 years worth of adventures!

Even more surprising is how popular the show is nowadays.  The show originally ran from 1963 – 1989.  There was an American-made TV movie in 1996 which didn’t perform well.  Then Doctor Who returned to the airwaves as a weekly TV series in 2005.  Go back in time four years to 2004 and Doctor Who was remembered as a joke by most people.  Now it’s one of the most popular television shows in the world with two spin-offs.    Just crazy!

I’ve personally been a fan for 25 years now.  It boggles the mind that I’ve been following this show that long.  I remember watching the 20 year anniversary special (The Five Doctors) when it originally aired.  25 years!  Geez, I’m getting old.

Anyway, happy birthday to that lonely old Timelord meandering around the universe in that rickety old Police Box!

3 thoughts on “Happy Birthday Doctor Who!”