The Ghost and My Television 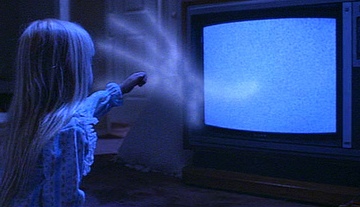 My house has a half-deaf ghost that likes watching TV on Saturday mornings.  Weird.

Here’s an example… I get up on Saturday morning at 7:00am and the RCA television in the family room is on with the volume at full blast.  This is odd because I was the last one to bed and I made sure the TV was off.  Even stranger, the last channel we watched on Friday night is not the same channel that is on Saturday morning.  Finally, we never watch TV with the volume turned up that loud.

If this only happened once, I’d just write it off as a fluke.  However, it’s been happening regularly for over a year now.  It’s not every Saturday morning, but at least once or twice a month.  Not on weekdays … not during the evening … only on the occasional Saturday morning.  Crazy!

I’m a pretty analytical guy, so I started investigating…

I’ve tripled checked the programming on the television.  There is an option to schedule the TV to turn on/off, however, it’s not enabled and there are no day/times in the system.

I’ve owned this television for years, but didn’t start having this problem until about a year ago.  So I checked with my neighbors, thinking perhaps their remote control was powerful enough to affect my TV.  No luck there.  They don’t own a RCA TV, they don’t own a universal remote, and they don’t watch TV on Saturday morning.

It happened again this past Saturday morning, but this time the TV was already on.  My two-and-a-half year old daughter woke up at 6:30am on Saturday.  Nothing like being woken up on the weekend really early.  yay.  She wanted to watch Disney cartoons and I wanted to sleep, so we compromised.  I let her watch cartoons in the family room on the couch, while I slept on the couch next to her.  About 30 minutes later, she woke me up and she was obviously unhappy.  When I fell asleep, the TV had been on the Disney Channel.  Now it was on the A&E channel with the volume full blast yammering about Adam Sandler’s career.  My daughter hadn’t left the couch and the remote was placed up high out of my daughter’s reach.  The ghost had struck again.

After a year of hunting this down, I’ve come to terms with the fact that we have a half-deaf ghost who likes Saturday morning television.  I guess there are worse things a ghost could do to us (I still have terrifying memories of seeing ‘Poltergeist’ as a kid).  I just wish the ghost had better taste in Saturday morning TV.  If you’re a ghost and you’re going to watch TV that early, at least watch some decent cartoons!

6 thoughts on “The Ghost and My Television”