I’m in a Star Trek mood…

Maybe it’s the upcoming movie or maybe it’s just the cyclical nature of my fanhood, but I’ve had Star Trek on the brain for a while now.

For whatever reason, the classic movie era is my favorite Star Trek time period. I’m a sucker for the adventures of Kirk and crew anytime between Star Trek: The Motion Picture through Star Trek VI: The Undiscovered Country. A few weeks ago I posted an ad from 1984 for Star Trek comics by DC. I’ve wanted to read those comics since I was a kid. Those George Perez covers on the first three issues are fantastic! Well… I broke down and ordered the first 21 issues of that 1984 series plus the first annual from Mile High Comics. They were having an insane sale and I got all of them for under $30 (that includes shipping). I’ve read the first couple issues already and I’m loving it! I can’t wait to get to the Mirror Universe saga! 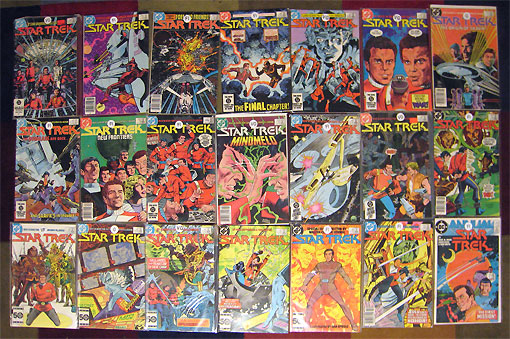 I also broke out my copy of the 1989 novel Star Trek: The Lost Years. This was a great book that took place after the end of the Enterprise’s original five-year mission, but before Star Trek: The Motion Picture. In the story, Captain Kirk, Mr. Spock, and Dr. McCoy struggle to establish new lives apart from each other and the starship. This book was created to bridge the gap between TOS and the movies. It was popular enough that they did three more books under “The Lost Years” banner. I’ve only read the first one, but I’m going to work my way through all four pretty soon here.

I’m pretty excited for the new movie, but if it sucks I’ve still got old Kirk comics and novels I’ve never read to fall back on. To paraphrase, “If you haven’t read it, it’s new to you.”