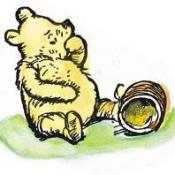 Today’s post is in honor of Memorial Day because SGhoul swears that Jim Dale is dead.

In case you hadn’t heard, the Trustees of the Pooh Properties have finally authorized a sequel to A.A. Milne’s classic, The House at Pooh Corner, more than 80 years after its publication.  While I appreciate the significance of this, the announcement seems rather lackluster since Disney has been producing original Winnie the Pooh stories for decades.

However, the good news about Return to the Hundred Acre Wood is that the audio version will be performed by Grammy Award-winning reader Jim Dale!  He is the British actor who voiced the amazing renditions of J.K. Rowling’s Harry Potter series, and was the narrator on the TV series Pushing Daisies.

He is going to be absolutely brilliant reading this!  I can’t imagine anyone else voicing new adventures of Winnie the Pooh.  I originally was going to let this Pooh sequel pass me by, but now I’m likely to pick up the audio book.  I’ll be looking for it in October when it’s released.

One thought on “Jim Dale to Read Winnie the Pooh Sequel”