Thanks once again to everyone that stopped by during BLUE DEVIL WEEK here at Once Upon a Geek. Based upon feedback I’ve received, quite a few people have enjoyed the Dan Mishkin & Gary Cohn interview.  I’m thrilled to hear that!  Keep your comments coming!

There were a couple images I’ve presented previously that I couldn’t resist including again.  First up is an advertisement for Blue Devil #1 that ran in DC comics in the month of June 1984.  I simply love this shot!

Next up is an advertisement from 1986 promoting the Blue Devil/Firestorm crossover. 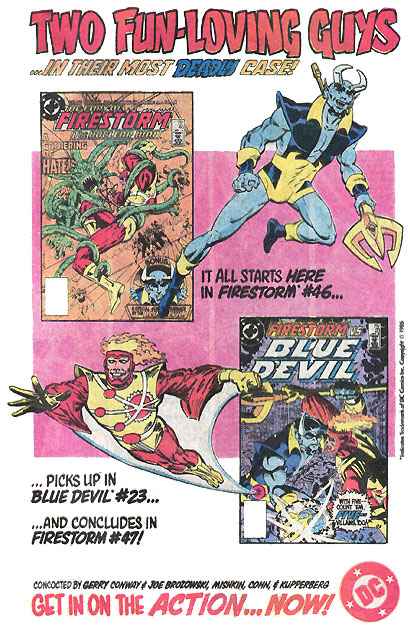 I ran the scan above of this ad a few months back.  Well… I was amazed when Frank over at …nurgh… ran the same image last week, but with a much better resolution.  Click here to see the amazingly clear copy of this advertisement.

Thanks again to all the visitors to BLUE DEVIL WEEK!  With FLASH WEEK, AQUAMAN WEEK, FIRESTORM FAN, and BLUE DEVIL WEEK all behind me, I’m only got one left to cover of my top five favorite superheroes – Doctor Fate.  It will probably be a while, but I”ll get around to it.