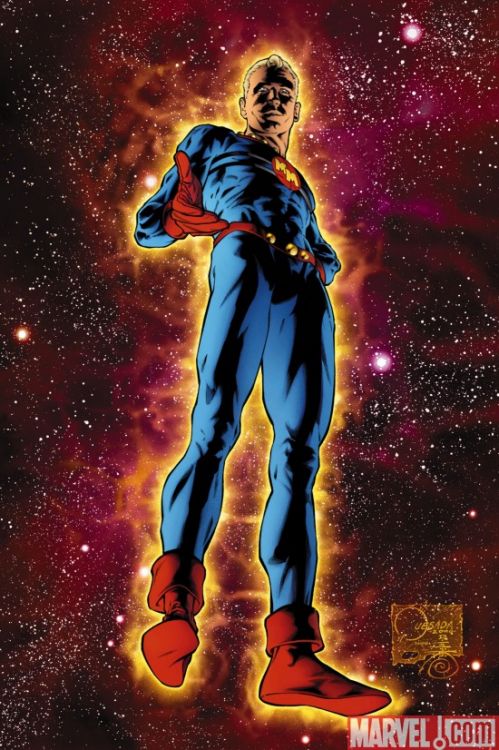 If you are not familiar with Marvelman/Miracleman, then the following will help.  About two years ago, I posted the following on THE UNIQUE GEEK list serv:

You need to read the “Miracleman” comic.

I’ve recently had the good fortune to borrow the graphic novels reprinting “Miracleman”. I read these many, many years ago, but it was a real treat to read them again. This was a comic published in the 1980’s and early 90’s, and which has since become legend. It was written by a little-known author named Alan Moore. He wrote 16 miraculous issues and then handed off the reins to another little-known author named Neil Gaiman who did another 8 issues.

The Miracleman comic book began life as “Marvelman”, a British Captain Marvel/Shazam rip off in the 1950’s & 60’s. He was basically a carbon copy of the Captain Marvel/Shazam character, even with his own “Marvel Family”. In 1982 Alan Moore revitalized the character, eventually changing the name to “Miracleman” (due to legal pressure from Marvel Comics). The series started as an interesting take on the Shazam mythos…. It progressed into areas no one could have predicted.

They even published an anthology mini-series called “Apocrypha” that allowed other writers to take a shot at the amazing Miracleman universe. Just a few other little-known authors from the “Apocrypha” mini-series: James Robinson (Starman), Matt Wagner (Grendel), and Kurt Busiek (Marvels, Thunderbolts).

Miracleman was great, thought-provoking, and way ahead of it’s time. Unfortunately, the rights to Miracleman have been in legal limbo for a number of years. Therefore it can’t be reprinted right now, and back issues and old trade paperbacks are extremely scarce.

If you are interested in reading it, you can get it through the following torrent. Normally I don’t endorse this method of acquiring comics, however, you can’t get the issues anywhere right now. So this really is the only option. <<TORRENT URL DELETED>>

If you’d like further information on Miracleman, you can read the Wikipedia entry here: http://en.wikipedia.org/wiki/Miracleman

If you check it out, let us know here at the Unique Geek. Enjoy! I know you will.

PS: Ever since issue #18 of Miracleman was published (back in 1990 I think), I’ve dreamed of having my very own “Bates” pendant. I want one even more now.

I stand by my statements about how amazing the Miracleman series was. While the Miracleman material still probably resides in limbo, at least Marvelman will see life again.  It will be interesting to see who Marvel gets to work on this book and what direction they’ll take it.  They could make the new series a continuation of the 80’s/90’s material (without the rights to reprint that material), however, I think it would be very hard for new readers to grasp what is happening. More than likely, they’ll have to go in a new direction.

In case you find yourself shirtless, you can already purchase Marvelman t-shirts from Marvel.  For a good rundown on the  confusing Marvelman/Miracleman publication history, click here.

Regardless what happens, it should be interesting to watch.