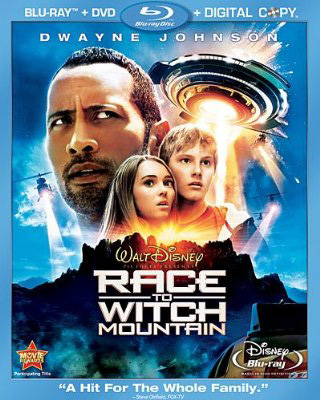 I was expecting a basic kid’s movie when I sat down to watch the DVD/Blu-ray of Race to Witch Mountain.  I’ve got two children myself and I’ve sat through a BUNCH of sub-par kid’s movies before.  The original Witch Mountain films still haunt my memory as pleasant childhood viewing, but I wasn’t expecting much from this modernization/remake.  Surprisingly, what I found instead was a fun action-adventure film with humor and a touch of emotion. Don’t get me wrong, this movie isn’t going to change your life, but it sure will entertain you and your family for 99 minutes.

Dwayne Johnson (The Rock) as always provides a likable muscle-bound everyman, the kind of guy you can’t help but cheer for.  The two otherworldly teens, AnnaSophia Robb and Alexander Ludwig, performed unexpectedly well in their roles.  And Carla Gugino (Watchmen, Threshold) rounded out our band of heroes as the stereotypical beautiful scientist.  Here is the description of the film from the official site:

Jack Bruno (Johnson), a Las Vegas cabdriver struggling to stay on the right path, gets an out-of-this-world incentive when two aliens, disguised as teenagers, suddenly appear in his taxi. In a race against government agents, an alien hunter and time itself, Jack must help the children recover their lost spaceship so they can return home and save their planet and ours. Breathtaking chases, close calls and special effects make this an action-adventure the whole family will enjoy.

Here is a clip showing some of the fun action in the film:

This movie also featured a bunch of super-cool supporting actors. I found myself taken out of the film a few times by seeing so many of my favorite actors in bit parts.  Check these out: Cheech Marin, Tom Everett Scott (That Thing You Do!), Chris Marquette (Fanboys), Garry Marshall (the creator of the HAPPY DAYS franchise), Bob Clendenin (Star Trek), Jonathan Slavin (Free Enterprise), and Meredith Salenger (as reporter Natalie Gann, which is funny because the actress is best known for her role as Natt Gann in the 1985 film The Journey of Natty Gann.)

Also making appearances in the film were the original actors who played the otherworldly children in the 1975 Escape to Witch Mountain – Kim Richards & Ike Eisenmann (GEEK FACT – he also played the rookie engineer that died in Star Trek II: The Wrath of Khan). I’ll be honest, I didn’t recognize Richards, Eisenmann, or Salenger in the film until I watched the Blu-ray bonus feature, “Which Mountain?”  Here’s a clip from this Blu-ray exclusive feature:

The only disappointments with this film come from the poorly-developed alien assassin, Siphon, and the under-utilization of Carla Gugino.  The Siphon character is your stereotypical unstoppable, yet always one step behind, killer.  He’s mostly obscured from sight for the first part of the movie for reasons of creating dramatic tension.  When we do finally see him fully on-screen, his appearance is somewhat corny – corny in the Power Rangers sense. After that he’s never really fleshed-out in an interesting way.  He blows stuff up good, but doesn’t really serve any purpose outside of being a hunter/killer.  Carla Gugino is a great actress, however, in the role of Dr. Alex Friedman she’s just sort of there.  I think this was more a function of the script than her abilities.  Given the opportunity, I believe she could have brought a lot more to the movie.  Those really were the only two letdowns of the film.

Some other things I liked about the movie include the incidental music and the Project Bluebook agents.  If you pay attention to the background music during the film, it really helps to enhance the action and tension.  You can’t help but get caught up in the rhythms.  In regard to the Project Bluebook folks, seeing them as antagonists was sort of like watching Men in Black from the alien’s point-of-view.

The DVD/Blu-ray I got is worth mentioning because it’s a cool three-pack.  Inside the case is a Blu-ray disk of the movie, a standard DVD of the movie, and a third DVD-ROM featuring a digital copy of the movie you can transfer to your computer and play with Window Media Player or iTunes.  It’s kind of the best of all worlds.   The three-pack retails for about $45, but you can find it discounted in lots of places.  The film is also available in a few other DVD varieties.

Overall, it was a fun movie well worth you and your family’s time.

Just a reminder: There’s still time to enter the contest to win one of five copies of The Wolverine Files hardcover! No gimmicks, no strings attached.  Just a chance to win a cool book for free!  Click here for details.  Contest ends tomorrow, Wednesday, August 5th.