Looking for Calvin and Hobbes 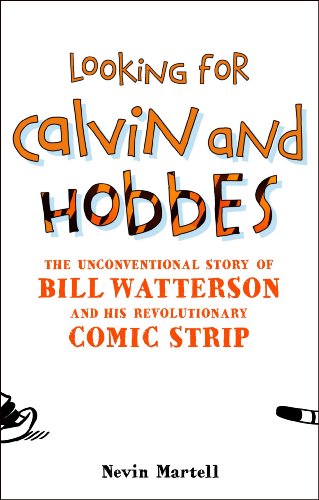 There is a book coming out in October that I’m anxious for … Looking for Calvin and Hobbes: The Unconventional Story of Bill Watterson and His Revolutionary Comic Strip by Nevin Martell.

If you’ve been reading ONCE UPON A GEEK for a while, then you probably know I’m a big fan of Calvin & Hobbes.  This comic strip found me at just the right time in life and I’ve felt a strong connection ever since (yes, it found me rather than the other way around).  Beyond reading the daily strips, I purchased the collections, and even put the unauthorized decals on my vehicles.  No… not Calvin peeing or praying.  These were actual images from the strips featuring Spaceman Spiff and a fierce-looking Hobbes.

This new book studies the life of reclusive writer/artist Bill Watterson.  While it appears that Watterson wasn’t actually interviewed for the book, the amount of research done is impressive.

Here is the description from the publisher, Continuum:

The fascinating life, work, and legacy of the reclusive creator behind the beloved Calvin and Hobbes comic strip

For ten years, between 1985 and 1995, Calvin and Hobbes was one the world’s most beloved comic strips. And then, on the last day of 1995, the strip ended. Its mercurial and reclusive creator, Bill Watterson, not only finished the strip but withdrew entirely from public life. There is no merchandising associated with Calvin and Hobbes: no movie franchise; no plush toys; no coffee mugs; no t-shirts (except a handful of illegal ones). There is only the strip itself, and the books in which it has been compiled – including The Complete Calvin and Hobbes: the heaviest book ever to hit the New York Times bestseller list.

In Looking for Calvin and Hobbes: The Unconventional Story of Bill Watterson and His Revolutionary Comic Strip, writer Nevin Martell traces the life and career of the extraordinary, influential, and intensely private man behind Calvin and Hobbes. With input from a wide range of artists and writers (including Dave Barry, Harvey Pekar, Jonathan Lethem, and Brad Bird) as well as some of Watterson’s closest friends and professional colleagues, this is as close as we’re ever likely to get to one of America’s most ingenious and intriguing figures – and a fascinating detective story, at the same time.

Only 3,160 Calvin & Hobbes strips were ever produced, but Watterson has left behind an impressive legacy. Calvin & Hobbes references litter the pop culture landscape and his fans are as varied as they are numerable. Looking for Calvin and Hobbes is an affectionate and revealing book about uncovering the story behind this most uncommon trio – a man, a boy, and his tiger.

Comics Worth Reading received an advance copy and did a fairly in-depth review.  While they were critical about much, they ended by saying, “… this really is a wonderful, warm, and informative book that manages to capture just the right amount of magic about the creator and his creation.“

I’m looking forward to reading this book and getting a better understanding of Bill Watterson, the creator of such beloved characters.

9 thoughts on “Looking for Calvin and Hobbes”