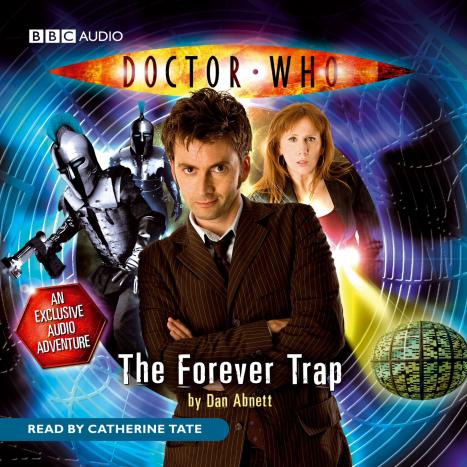 I just finished listening to an excellent Doctor Who audio book entitled, The Forever Trap.  I’m typically more of a full-cast audio drama fan, but this particular audio book really impressed me.  The story was written by Dan Abnett (yes, that Dan Abnett of Marvel Comics Nova, Annihilation, War of Kings, etc), read by Catherine Tate (Donna Noble on Doctor Who), and features the Tenth Doctor and Donna.  This two-disc story was released in the same format as the other BBC Books Tenth Doctor Adventures audio book adaptations, but this one was released exclusively to audio.  It is the second of its kind, preceded by Pest Control and followed by The Nemonite Invasion.

I’ve listened to Pest Control, which was read by David Tennant, but it failed to impress me.  Even with David Tennant reading the story, it still didn’t feel like proper Doctor Who.  Needless to say, after that I didn’t have high hopes for The Forever Trap.  As I had expected, I was disappointed within the first few minutes of The Forever Trap.  Right out of the gate, Catherine Tate provides an unbelievable voice for the role of a holographic salesman.  I was so turned off by that voice, I gave up listening for a while.  A few days later, I started the audio book again.  Wow!  Sure, that salesman voice isn’t great, but the rest of the audio book was fantastic!  I could visualize the Doctor perfectly thanks to an excellent script by Dan Abnett, and Catherine Tate totally nailing David Tennant’s speech patterns.  Did I already say “Wow”?  Well, I gotta say it again.  WOW!  This is proper Doctor Who.  Abnett clearly gets the Doctor and Donna both.  Also, his talent for writing good science fiction really shines through.  Kudos to Catherine Tate for doing such an outstanding job!  She effortlessly switches between the abrasive Donna, the energetic Doctor, and a wide array of other characters.  I didn’t realize what an amazing range she has.

I thoroughly enjoyed listening to this audio book, more so than most other Doctor Who audio books.  Apparently The Nemonite Invasion is also read by Catherine Tate, so now I’m gonna have to track that one down too!

One thought on “Doctor Who Audio Book Recommendation”