I’m currently reading the science fiction novel Seeker by Jack McDevitt.  I’m about 100 pages in and really enjoying it.  It won the 2006 Nebula Award for Best Novel.  The story is set approximately 10,000 years in the future and follows Alex Benedict, space archeologist, as he tries to uncover the mystery of a 9,000 year old artifact.  I heard about this book and the author from the Science Fiction Book Club.  It’s the third in the Alex Benedict series, but was recommended as a great jumping on point.  So far, so good.  One of the things McDevitt excels at is creating characters and settings that are completely understandable to modern day readers, even though the story is set 10,000 years in the future.  If you’re looking for a decent read, give this a shot.  And John Harris’ cover just screams classic sci-fi! 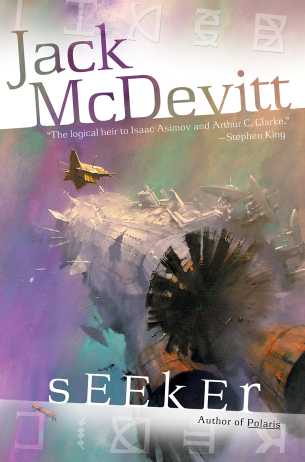 To give you an idea of how well McDevitt’s sci-fi is received, here are a couple excerpts from reviews:

McDevitt is now being compared, quite legitimately, to Arthur C. Clarke, and not only because he has a similar kind of grand vision of the human future among the stars. He also has characters with amiable, or not-so-amiable, quirks, who in the middle of deciphering the secrets of lost races take time to worry about where to get a good meal in the next town.

Jack McDevitt won the Philip K. Dick Award for his first novel, The Hercules Text, and the first UPC prize for his novella, “Ships in the Night.” He has been nominated for the Nebula and Hugo for his novella, “Time Travelers Never Die”, The Engines of God was an Arthur C. Clarke Award finalist and his novel, Ancient Shores, was a Nebula finalist in 1998.