Here is a great idea THE IRREPRESSIBLE GENA found and sent to me… Action figures as hooks!  From Real Simple:

Use action figures (that aren’t seeing action anymore) as Herculean hooks. Position the arms of each toy straight out in front and apply a two-part epoxy (available at home-improvement stores) over the arms, the shoulders, and the torso, following the package directions. The epoxy will make the outstretched limbs strong enough to support clothing, hats, and even towels. Mount a figure on the wall using two screws placed through the torso. 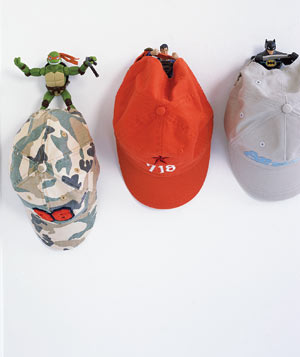 Brilliant idea!  Maybe I’ve finally found a use for those dozen Aquaman figures!