Last week I picked up the new Doctor Who novel by famed sci-fi/fantasy writer Michael Moorcock, The Coming of the Terraphiles. 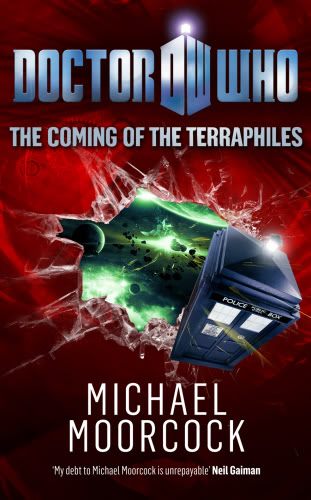 The novel stars the current Doctor (as portrayed by Matt Smith) and his companion Amy Pond (as portrayed by Karen Gillan).  The BBC has previously published hundreds of Doctor Who books, but they are making a big deal about this novel as it’s the first special release in a lengthier hardback format.  Here is the description of the book.

There are dark tides runing through the universe… Miggea – a star on the very edge of reality. The cusp between this universe and the next. A point where space-time has worn thin, and is in danger of collapsing… And the venue for the grand finals of the competition to win the fabled Arrow of Law. The Doctor and Amy have joined the Terraphiles – a group obsessed with all aspects of Earth’s history, and dedicated to re-enacting ancient sporting events. They are determined to win the Arrow. But just getting to Miggea proves tricky. Reality is collapsing, ships are disappearing, and Captain Cornelius and his pirates are looking for easy pickings. Even when they arrive, the Doctor and Amy’s troubles won’t be over. They have to find out who is so desperate to get the Arrow of Law that they will kill for it. And uncover the traitor on their own team. And win the contest fair and square. And, of course, they need to save the universe from total destruction.

I’m really looking forward to reading this novel!  This will be my first Michael Moorcock book.  I’m aware of his Elric and Jerry Cornelius fame, but I’ve never gotten around to reading one of his novels before.

3 thoughts on “ACQUIRED: Doctor Who Novel by Michael Moorcock”