I love me some old Marvel Star Wars comics! Of the 107 issues, I firmly believe the Shira Brie saga spanning issues 60 through 63 were some of the best of the series!  Scott and Chris of Two True Freaks were kind enough to invite me onto their podcast recently to discuss this fantastic storyline!  Scott and I are so passionate about this story, they had to break the episode into two parts because we talked so much!  What’s not to love about these comics?!?!  David Michelinie’s plots and scripts, Walt Simonson’s plots and pencils, with Tom Palmer’s inks.  If you know your Star Wars Expanded Universe lore, then you understand the importance of this storyline.  Pure awesome! 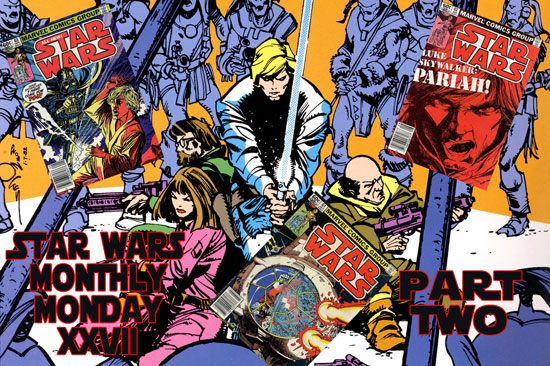 Here are the tongue-in-cheek descriptions of the episodes from their website:

This month, the Freaks are joined by The Irredeemable Shag for their coverage of Marvel Star Wars #60-63. This episode was sooo long it had to be broken into TWO HUGE HALVES! Why so long, you ask? Well, it seems Shag and Scott (two grown men, mind you) love Shira Brie like an emo teen girl loves Justin Bieber.

Listen to them babble on endlessly about their girlfriend Shira Brie. What is her favorite color? Do you think she would like Scott’s new haircut? Shag has never washed his eyes since the first time he saw her in the comics! Honestly, these are “adult”, married men- I don’t know about Shag, but Scott even has kids. How healthy is it for them to have hot pants for a comic book character?

Here’s the second half – featuring issues #62 and 63. Scott and Shag make moon-eyes at pictures of Shira, describe what their “dream date with Shira” would be like, and basically make you wonder which one of them has the bigger creepy Shira Brie shrine in their back shed. Brought to you by RICH POWERS!

My thanks to Scott and Chris for letting me appear on their show to discuss this phenomenal storyline!  Be sure to check out Two True Freaks!