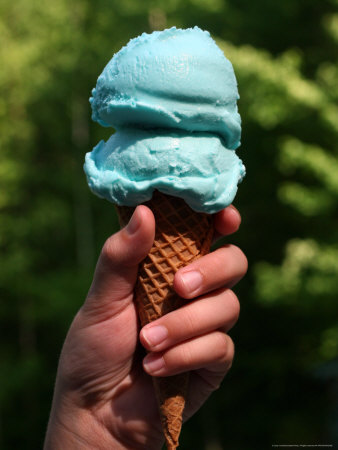 Maybe it’s because I’m originally from Michigan, but I can’t get enough Blue Moon ice cream.  For those uninitiated, Blue Moon isn’t a place, it’s a flavor.  Wait… calling it simply a flavor doesn’t do it justice. It’s a taste delight!

This ice cream is commonly found in the upper-Midwest states such as Michigan, Wisconsin, and Minnesota.   Thankfully there is a Michigan-based ice cream franchise, Kilwin’s, which carries this heavenly taste as far south as Florida.  I was on vacation in St Augustine this past weekend and stumbled across a Kilwin’s location selling Blue Moon.  My family had to endure an excruciating long walk in order for me to get this ice cream.  They were all troopers knowing just how much it meant to me (and the fact that they were getting the ice cream of their choice as well).

I can’t really describe the taste of Blue Moon.  Words fail me.  The best I can come up with is it’s a cone full of joy.  It reminds me of trips to my Grandmother’s house in Baldwin, Michigan.  Jones Home Made Ice Cream shop was just up the street and we’d go there every visit to Grandma’s (regardless of the time of year or amount of snow on the ground).  The memory of Jones Blue Moon ice cream still haunts me.  Kilwin’s Blue Moon is REALLY good, but not quite as good as I remember Jones.  Probably just my memory playing tricks on me.

To see if there is a Kilwin’s location near you, check out the list of retail locations.  If there is one near you, it’s worth the drive to check out Blue Moon ice cream.  It’s probably for the best that I can’t get Blue Moon ice cream here in my hometown.  I would probably grow accustom to Blue Moon, take it for granted, and fail to celebrate its wonder as often as it deserves!

Looks like there is a Kilwin’s location about 3 miles from the DragonCon host hotel in Atlanta.  Over Labor Day weekend, I think I’ll be making a detour on my way to the dealer room…

41 thoughts on “Blue Moon Ice Cream… the stuff of legends”