Crisis On Earth-Blog: The DC Challenge - ONCE UPON A GEEK.com

by The Irredeemable Shag 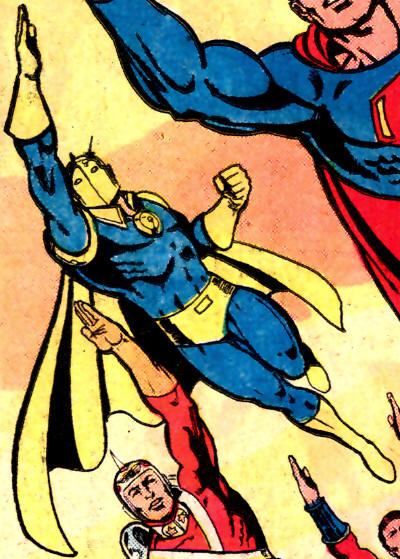 Welcome to ONCE UPON A GEEK's part of the Crisis on Earth-Blog: The DC Challenge! ONCE UPON A GEEK is a blog that focuses on a variety of geeky topics, including: comic books, Doctor Who, Star Wars, role-playing, 80’s TV shows, and science fiction in general. If this is your first time here, welcome aboard! If you're a regular, I think you'll enjoy this crossover event.

Today and throughout the next few weeks on comic book-themed blogs across the internet, DC Comics characters are being spotlighted in a series of challenges. In my case I'll be representing Doctor Fate, one of my all-time favorite superheroes. Your DC Challenge, if you choose to accept it, involves visiting each of these various blogs and tackling their particular challenge.

The objective of these challenges is to go from blog to blog until you reach the goal-page featuring a lush scan from an obscure George Pérez pin-up of every major character involved in this crossover event. We all hope you enjoy this online scavenger hunt, and the new comic blogs you'll be exposed to! Many thanks go out to mastermind Frank Lee Delano (of the blogs: Idol-Head of Diabolu, Justice League Detroit, and ...nurgh...) for coordinating this massive effort! Way to go, Frank!

Your ONCE UPON A GEEK challenge is the crossword puzzle below. Each question in the puzzle relates to either Doctor Fate, a character participating in this crossover, or other well-known DC characters. Just a heads-up, I removed any spaces or hyphens from the answers. For example "Captain Amazing" would simply be "CaptainAmazing"; or "Locust-Man" would simply be "LocastMan". Once you've finished the challenge, follow Doctor Fate's mission beneath the puzzle. Have fun!

This interactive crossword puzzle requires JavaScript and a reasonably recent web browser, such as Internet Explorer 5.5 or later, Netscape 7, Mozilla, Firefox, or Safari. If you have disabled web page scripting, please re-enable it and refresh the page. If this web page is saved to your computer, you may need to click the yellow Information Bar at the top of the page to allow the puzzle to load.

Hope you enjoyed the crossword puzzle! Now you’ll have to work your way through Doctor Fate's mission and a few of the blogs below if you want to reach the goal-page featuring an obscure George Pérez pin-up of every major character in this crossover. Some of these blogs are participating in the crossover today, others will be in the coming weeks. Visit them now, visit them later, visit them often!

Inza Nelson sat on an antique couch, working a personalized other-dimensional crossword puzzle, within her invisible tower home in Salem, Massachusetts. Many wives find themselves "widowed" by their husbands' obsessions with sports, gambling or what have you. You could say Inza was a sorcery widow, as the unnaturally youthful woman had been since meeting her husband-to-be in the 1940s. It was then that Kent Nelson began his career as the crusading mage Doctor Fate, serving the cause of Order alone, and later as a member of the Justice Society of America. In the years since, Kent has become withdrawn from humanity and increasingly isolated in his studies, leaving poor Inza to her own devices.

Or not. Dr. Fate strode into the room, his features almost entirely obscured by his mantle of power, the gleaming Helm of Nabu. "Take cover," he demanded, "I'm expecting uninvited guests." Just then, otherworldly luminescence filled the room, followed by the material forms of three strangers.

The first looked like a derelict, with his unshaven face and long, unkempt black hair, streaked with crimson. He scowled, "I remember you two, even if you were withered old prunes when we met." This menacing fellow, with a red ankh tattooed over his right eye, drew a golden blade on Dr. Fate. "I took that helmet of yours, and turned it into something useful. I was supposed to be the balance between Order and Chaos, but everything turned rotten, and I'll end up with my own blade stuck between my ribs."

The second figure exactly like Dr. Fate, but his tone was less haughty. "We took on your duties, and it will destroy us, body and soul. They warned us. We will stop you from cursing us."

The third figure was also strikingly similar to Kent, but less poised, and with a costume bearing an ancient Egyptian motif. "I am Hawkman's son. Why couldn't I just defend the skies? Why did magic rot away my life, killing me, taking my lover's mind and my son's soul? Why couldn't you do your own job?"

If Dr. Fate found any of this disturbing, he showed no sign of it. "I can sense the touch of Nabu in each of you, but you are not in a time of your own, and you each forget your place. Not a single one of you will carry the weight of my responsibilities for a fraction of my length of servitude. One day, you may each claim my place as Fate, but for now, begone." With that, Dr. Fate dismissed these future inheritors of his mantle, seemingly with all the effort of an afterthought.

Inza rushed to the being who was both her husband, and something else entirely. She wondered who these Fates were, and what their appearance meant. "They were representatives of a possible future, manipulated into adulterating our present, and they are not alone. All across the Earth, these agents of a grim tomorrow haunt other superhumans. They do not belong, and I will see to their removal."


If you enjoy blog crossovers, then you may want to check out the previous comic blog crossovers we've done. The first major Crisis on Earth-Blog celebrated the gorgeous George Pérez/Alex Ross painting from the Crisis on Infinite Earths 1998 hardcover. The next blog crossover was a celebration of the Super Powers Collection's 25th Anniversary.