Fourteen different blogs have combined forces today to celebrate the 25th anniversary of Kenner’s Super Powers Collection! While we’ll be looking at Doctor Fate here (as well as the proposed Blue Devil figures), every other blog in the crossover will cover different action figures or mini-comics from the Super Powers Collection.  Back in 1984, Kenner released the first wave of Super Powers action figures based upon heroes and villains from DC comics. While there was a fairly large marketing campaign, I doubt they realized just how celebrated these figures would become.

The first wave of figures had characters like Superman, Batman, Robin, Wonder Woman, Green Lantern, Flash, Aquaman, Hawkman, the Joker, Lex Luthor, Brianiac and the Penguin.  Two more waves were released, bringing the line to a total of 33 figures.  One of the primary reasons the Super Powers Collection became so successful was that the molds were very good. These figures actually looked like the characters in the comics. That may sound like a no-brainer in the age of DC Direct and McFarlane Toys, but keep in mind prior to the Super Powers Collection adherence to characters likeness wasn’t exactly a priority. Another reason for the line’s success was the inclusion of popular heroes and some relatively unknown characters (I mean, who really demanded a Tyr figure anyway?). This mixture proved to be popular with comic book fans and kids alike. Finally, some people will argue that the “Power Action” hidden gimmick in each figure was a big selling point. I don’t necessarily agree with that, but hey, everyone’s entitled to their own opinion, right? 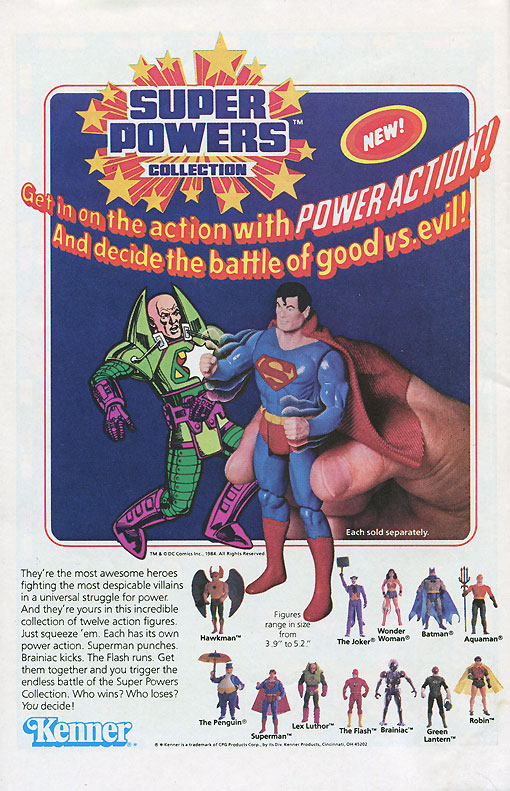 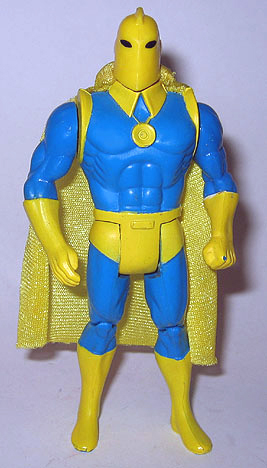 Below-Left is a picture of the Super Powers Collection Doctor Fate still on the card. This is the Canadian version, which I’ve seen advertised recently on the card for as much as $369 in near-mint condition.  Below-Right is the file card found on the back of the packaging explaining more about Doctor Fate. 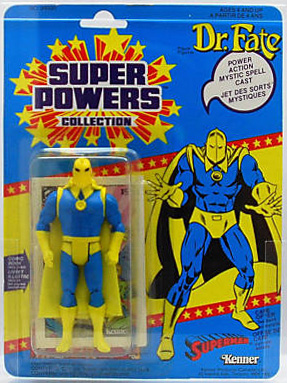 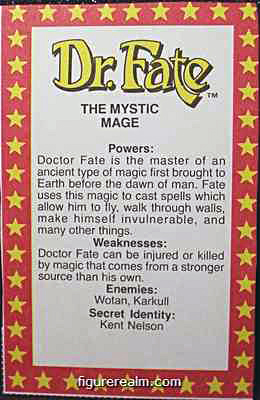 Each of the Super Powers figures had a hidden gimmick, referred to as “Power Action”. In Doctor Fate’s case it was a “Power Action Mystic Spell Cast”. By squeezing his legs together, his arms would move up and down. I suppose this was to simulate Doctor Fate casting one of his trademark Ankh Bolts. While the gimmick was nice (especially since it didn’t disrupt the appearance of the figure), it really wasn’t necessary to the character.

To see the “Power Action Mystic Spell Cast” in action, check out the Super Powers review site done by Cool Toy Review. Go to the bottom of the page and roll over the photo to see Doctor Fate in action.

The first two waves of Super Powers action figures each came with a mini-comic book starring that particular character. These comics were 4.5 inches by 2.75 inches, and had 13 pages of story.

Not much information exists about who the writers and artists were for these mini-comics.  Paul Kupperberg (writer of the full-sized DC Super Powers mini-series from 1985 and 1986) had this to say about Kenner’s Super Powers Collection mini-comics, “I wrote only one of the Kenner minis, for Steppenwolf (#13). Alas, I have no real memory of having done it. Art looks to be Jose Delbo. The rest were probably written by the likes of Jack Harris, Rozakis, and the like. Wish I could remember more about them: don’t even recall who the project editor was…probably Barry Marx, who worked under Joe Orlando in Special Projects.”  Special thanks to The Aquaman Shrine for the quote!

Doctor Fate had his own mini-comic in which he battled the brainwashed Superman and Martian Manhunter.  The mini-comics served to introduce the characters to new readers, as well as to promote other action figures in the line. While both Superman and Martian Manhunter co-starred in Doctor Fate’s mini-comic, they also had figures of their own in the Super Powers line. In the same vein, Doctor Fate appeared in the mini-comics of Steppenwolf, Kalibak, Desaad, and the Parademons.

Here is the Doctor Fate Super Powers Collection mini-comic in its entirety: 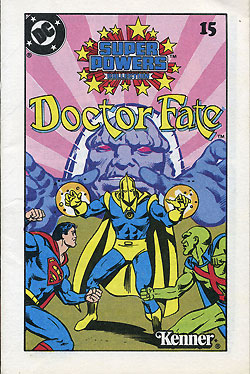 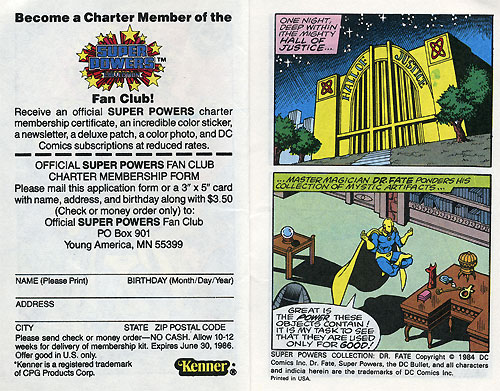 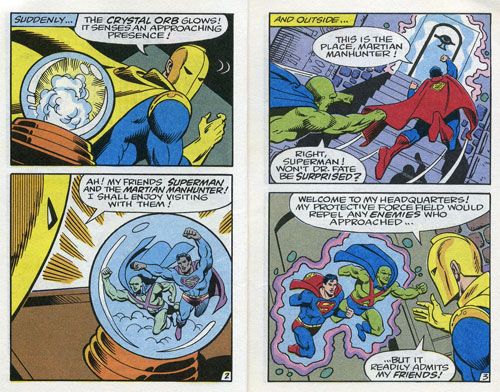 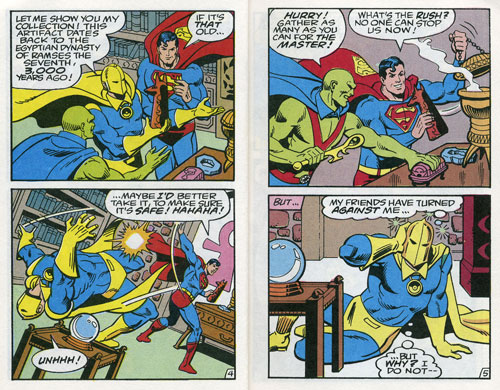 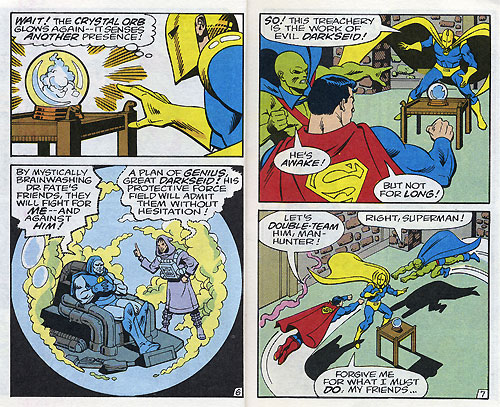 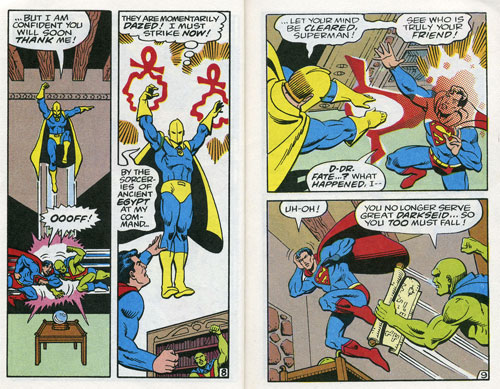 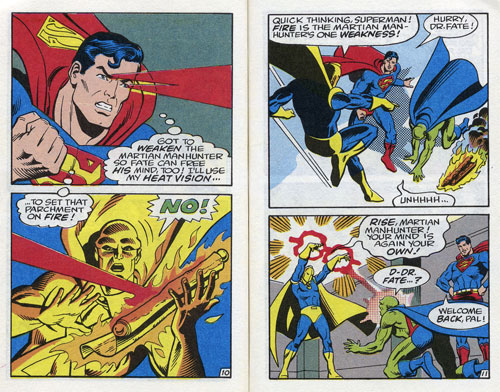 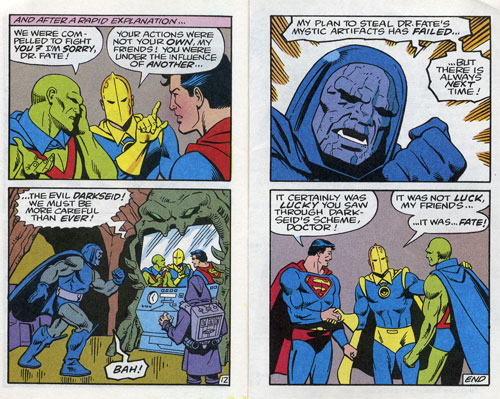 I remember at the time being very confused by Doctor Fate’s mini-comic and his appearance in the full-sized 1985 DC Super Powers mini-series.  In both stories, Doctor Fate (who was from Earth-2) was interacting freely with characters from Earth-1.  This made no sense to my youthful continuity-laden brain.  While I knew there were rare crossovers between the two Earths, it would have been worth mentioning if the good Doctor had indeed crossed the multiverse.  The truth behind Doctor Fate’s presence would become apparent five months later when Crisis on Infinite Earths began to wrap up.  The multiverse was destroyed, leaving one unified Earth in which Doctor Fate coexisted with all the other DC characters.   However, for those five months I was one confused kid.

Doctor Fate also appeared in the Paul Kupperberg written Steppenwolf mini-comic.  I have to say that I found it interesting that the mystical guy is the one who reparied the computer problem.  Unusual.  For more on Red Tornado’s contribution to the Super Powers Collection, check out Doug’s Doom Patrol blog today, MY GREATEST ADVENTURE 80. Below are a few Doctor Fate-centric pages from the Steppenwolf mini-comic: 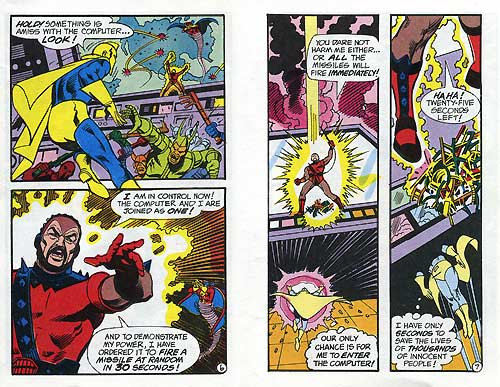 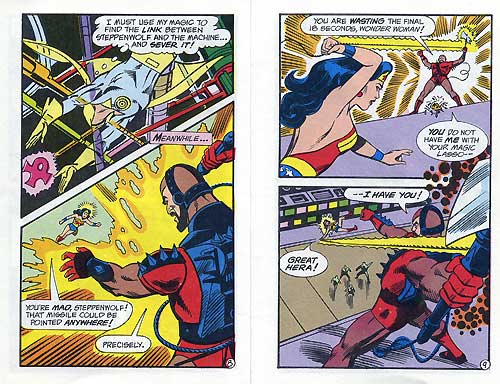 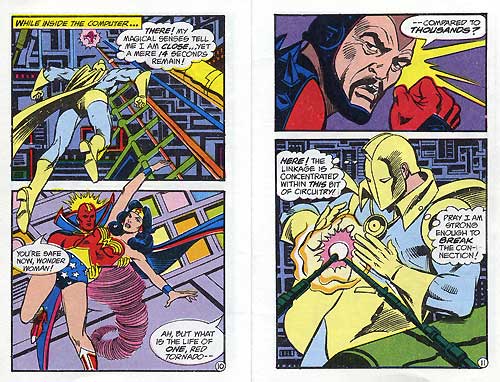 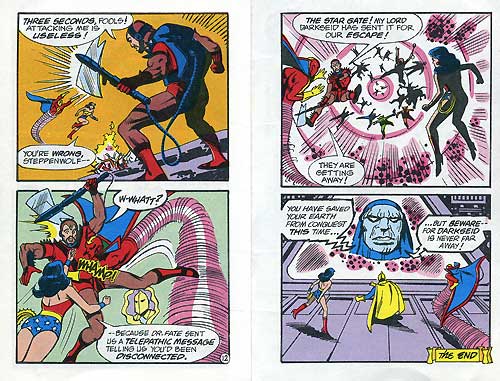 In the Kalibak mini-comic, Doctor Fate does some trippy mojo and creates demonic illusions of Superman and Red Tornado in order to scare off Kalibak.  Just a reminder, for more Superman Super Powers action check out FORTRESS OF BAILEYTUDE; for more Red Tornado Super Powers action check out Doug’s Doom Patrol blog today, MY GREATEST ADVENTURE 80.  Below are a few Doctor Fate-centric pages from the Kalibak mini-comic: 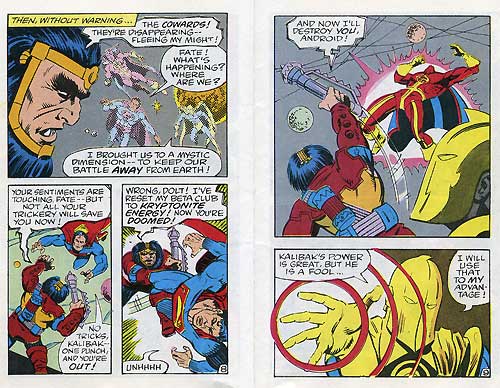 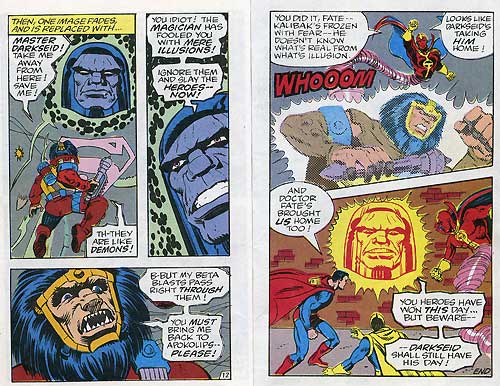 In the Desaad mini-comic we get to watch Doctor Fate get his butt handed to him.  Don’t worry, he eventually gets rescued by Green Arrow and Robin.  For more Green Arrow Super Powers coverage, be sure to check out Adama’s blog today, DISPATCHES FROM THE ARROW CAVE.  Head on over to Tommy’s BAT-BLOG today for more on Batman & Robin’s activities in the Super Powers Collection.  Below are a few Doctor Fate-centric pages from the Desaad mini-comic: 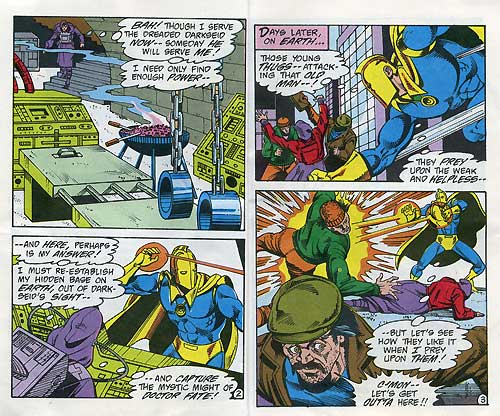 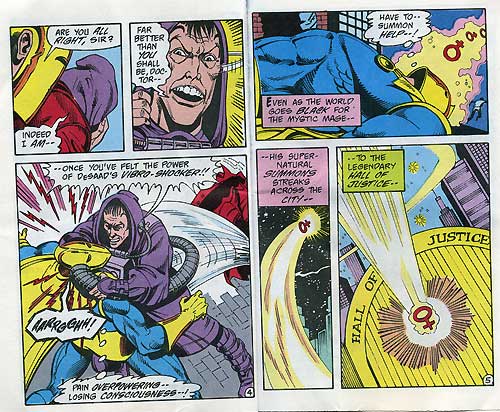 For Doctor Fate’s involvement in the Parademons mini-comic, check out FIRESTORM FAN today for all the details.

Finally, it wouldn’t be a Doctor Fate comic tribute without showing some Ankh Bolts!!!

Many people don’t realize this, but there were additionally planned, yet unproduced action figures for the Super Powers Collection. Turns out that Kenner was working on several figures for release after the third wave. You can read all about it, see presentation artwork, and mock-up figures by clicking here.

Below is a custom mock-up of what Blue Devil’s Super Powers action figure could have looked like.  Nicely done by Jason Geyer. It makes me sad these figures never came to be.  They would have been a revered part of my childhood. 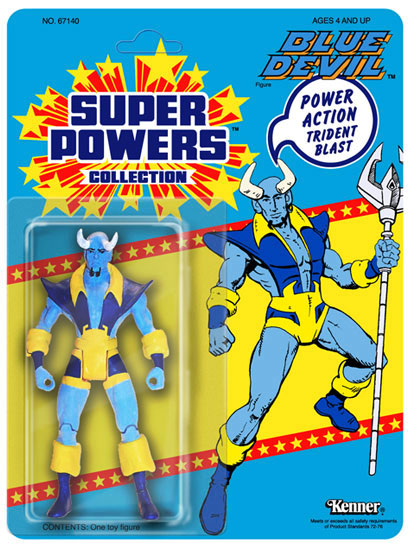 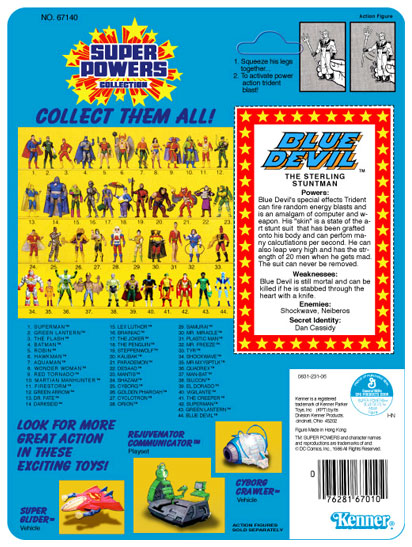 As mentioned, fourteen different blogs (**UPDATE** fifteen) have teamed-up today to celebrate the 25th Anniversary of the Super Powers Collection. While I’m featuring Doctor Fate and Blue Devil here on my site, you can visit these other character-specific blogs to see how they spotlight their own favorite characters today. Be sure to check out:

While the following blogs are not participating in today’s crossover, I’d like to thank them for their support.  For various reasons, they were unable to join us today but have been very supportive of the project.  Thanks!

What a great series of action figures!  For those of us who owned some back in the day, we’ll never forget the magic of these toys.  My thanks to all the bloggers involved today in this crossover event!  Happy Birthday Super Powers Collection!