Grant Morrison wants to do what…?!?!

So I think Grant Morrison must either be a complete nut-bar or a genius beyond our understanding. 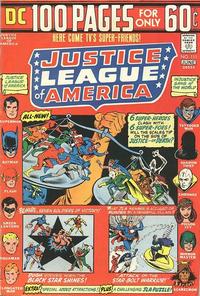 I’d heard that the upcoming “Final Crisis” would have something to do with the former JLA villain Libra.  In preparation for “Final Crisis”, I decided to enter Shag’s Sanctum Sanctorum and dig through the archives for Libra’s one and only appearance – Justice League of America #111 (June 1974).  I found my tattered copy and dove into the story.

This was one of those 100 page comics for only 60 cents.  It featured a 20-page lead story with the JLA versus Libra and the newly-formed Injustice Gang of the World.  Back-up stories included a reprint of a golden age “Seven Soldiers of Victory” story, and a reprint of an early JLA story where they battle Brain Storm.  All told, this is a massive 100 pages of fun!

While the 100 page comics are pretty cool just for their massive size and content, this Libra story was pretty tough to slog through.  Why on Earth this inspired Grant Morrison is beyond me.  The lead story in JLA #111 was written by Len Wein and drawn by Dick Dillin & Dick Giordano.  The gist of the story is that a bunch of villains (all foes of various JLA members) are gathered by a mysterious stranger named Libra.  Together they form the Injustice Gang of the World.  Libra wants the Injustice Gang to be the evil opposite of the Justice League (they even have a satellite orbiting Earth 22,300 miles above the opposite side of the Earth).

All this is pretty standard fair for the time period of superhero comics.  The story enters the realm of ridiculous when the heroes get ready to go face down their respective foes.  Elongated Man makes a suggestion that instead of the heroes tracking down their usual villains, they put their names in a hat and randomly draw which villain they will go after. Batman is the voice of reason stating that the idea is unprofessional and illogical.  Unfortunately Batman is outvoted and they use the random method.  Why on Earth would you do that?!?!?!  If lives are in danger, you should send your best or more experienced guy.  Why send Aquaman after Poison Ivy?  Don’t you think Batman’s experience would allow him to beat her up quicker?  So the JLA is risking many innocent bystanders lives, simply because they feel like “changing it up a bit”.  Crazy… but that’s comics in 1974 for you.

In the end Libra managed to capture the active JLA members, stole half their powers, and activated his device to steal half of the power from the entire Milky Way galaxy.  Yup, you read that correctly… half of the power from the entire Milky Way galaxy.  What a nifty device!  Don’t you think if Libra could build a device like that, he really didn’t need to bother with these second-rate villains and the JLA?  Anyway, a few Leaguers were able escape Libra’s trap, but not before Libra began to soak in half of the power in the galaxy.  The power proved to be too much for Libra and he became so disjointed he couldn’t hold together the very atoms of his own essence.  Libra dissipates into the ether complaining about knowing too much.  Libra’s device did manage to rob the JLA of half of their superpowers, however, this wasn’t a permanent loss.

So this is the villain that Grant Morrison feels simply must be brought back after almost 35 years in obscurity?!?!?!  Maybe Morrison is going to take the approach of Libra balancing the cosmic scales, or depowering the heroes by robbing them of half their power, or maybe Grant just wants all the heroes to put their name in a hat to decide who they fight.  I keep imagining this funny scene where Aquaman draws Doomsday’s name out of a hat – Suffering Sardines, Aquaman!  Who knows what angle Morrison will take.  After reading this story, I’d be more likely to  bring back Flex Mentallo after seeing the classic Charles Atlas ad in this issue.  I’m willing to forgive Len Wein given the way comics were written back in 1974.  However, Grant… sorry, time for your meds.  With that said, if Grant can pull off “Final Crisis” like he has previously done with “Arkham Asylum“, “JLA”, “Animal Man“, “Doom Patrol“, or “52“, then we’ll be singing the praises of Grant’s misunderstood genius.