Doctor Who’s first bad ass (and one of my favorite characters) was Abslom Daak, Dalek Killer.  He first appeared in 1980 in a back-up comic strip published in Doctor Who Weekly (later called Doctor Who Magazine).  He was created by writer Steve Moore and artist Steve Dillon.  Dillon went on to fame as one of the primary artists on Garth Ennis’ “Hellblazer” and “Preacher”.

Daak was a hardened criminal that was sentenced with D-K duty.  This entailed being teleported from the human empire to a planet deep within enemy Dalek territory.  While there, condemned criminals served the human empire by killing as many Daleks as possible before being killed themselves.  The life expectancy of a D-K was about 2 and 1/2 hours.

To give you an idea just how bad ass Abslom Daak was, here is the dialogue from his first couple panels…

Judge: “Abslom Daak… you have been found guilty on 23 charges of murder, pillage, piracy, massacre and other crimes too horrible to bring to the public attention. There are two choices: death by vapourization or exile D-K!!”

Awesome!  Abslom cut a swathe through the Daleks with his chainsaw-sword, blaster, and his never-give-up attitude.  Along the way he found love, friends, booze, and adventure.  Interestingly enough, the Doctor did not appear in any of Daak’s adventures until 1989. Abslom appeared in several issues of Doctor Who Magazine over the years, ending in 1993.  He also appeared in one of the Virgin “Doctor Who New Adventures” novels (well… sort of).

Throughout his appearances, he remained a bad ass, a bastard, and killed a bunch of Daleks.  He was a real jerk, but you couldn’t help liking him and cheering for him.  I think that’s why I love this character so much.  I’m always drawn toward the heroic assholes – Guy Gardner, Nathan Petrelli, and guys like that.  Y’know, the irredeemable type.  🙂 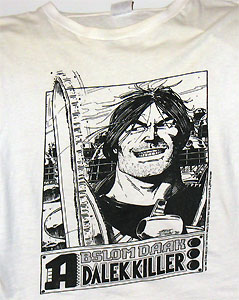 You can still find copies on eBay of the collection reprinting his appearances, “Abslom Daak – Dalek Killer” by Marvel Comics.  Additionally, a group called Altered Vistas has produced some Abslom Daak audio adaptations that might be worth checking out.  Finally, at one point you could get a t-shirt with Abslom Daak (see picture to right).  My good friend Ravenface bought me this t-shirt when he visited England in the early 1990’s.  I seriously doubt you could find one nowadays.  I’m eternally in Ravenface’s debt.

So if you find yourself trying to decide who is the toughest/coolest Doctor Who character, and you’re wondering is it Captain Jack Harkness, Christopher Eccleston’s Doctor, or Duggan?  Forget all those bitches… its Abslom Daak, Dalek Killer!