A few weeks back I wrote a blog post on a book I was reading, “Indiana Jones and the Seven Veils”.  It was an older book that was published back in 1991, but I read it to tide me over until I got around to seeing “Indiana Jones and the Crystal Skull”.  Well, I finished this book and enjoyed it (definitely more traditional Indiana Jones than the new movie).  This adventure took place between the “Young Indiana Jones Chronicles” TV series and “Raiders of the Lost Ark”, and definitely captured the spirit of Indy.  I would recommend it to anyone who liked “Indiana Jones and the Temple of Doom”.  It felt more in-tune with that film than the others.  As I mentioned before, it covered all the good bits of Indiana Jones like lost ruins, booby traps, things going wrong for Indy, a beautiful girl, and almost losing his hat.  The only negative comment I have is that the story ended somewhat abruptly, however, I understand why they had to do that.  You’d have to read the story to understand what I mean. 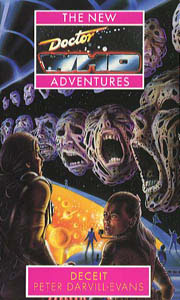 Now I’m reading another older book (1993), Doctor Who The New Adventures “Deceit” by Peter Darvill-Evans.  These original novels by Virgin publishing started shortly after the first Doctor Who TV series was cancelled.  These books tackled stories too broad and deep for the small screen, and took Doctor Who into previously unexplored realms of time and space.  They explored much more mature themes and really helped push the storytelling for Doctor Who forward.  The stories were very enjoyable, featured plots that would run across multiple novels, and really kept the Doctor Who torch burning during the lean years (between the end of the first TV series and the 1996 TV movies).  I’d be willing to say that the current TV series would not have been so successful without these novels.  In fact, several of the authors for the new TV series wrote New Adventures novels first, such as: Russell T Davies, Paul Cornell, Mark Gatiss, Gareth Roberts, and Steven Moffat (he wrote a short story).  Also worth noting, the season three two-parter, “Human Nature” and “Family of Blood” was an adaptation of the New Adventures novel “Human Nature” by Paul Cornell.

The New Adventures novels followed the adventures of the Sylvester McCoy Doctor, along with Ace, and several new companions.  The most popular of these newly-created companions is Professor Bernice Summerfield.  She totally kicks ass and eventually got her own line of books and audio dramas.  The reason I chose to read “Deceit” (book 13 out of the 61 books published) was because Abslom Daak has an appearance in this one.  I’m about 100 pages in and the book is very enjoyable.  I had forgotten that the New Adventures books take a while to get used to.  They say most books are written at a 6th grade level.  I would say these books are written at a slightly higher level, which requires some additional focus from the reader.  One of the interesting things about the New Adventures novels is that the Doctor typically doesn’t show up for the first 50 pages.  It can be a bit frustrating at first, but it gives the novelist some time to really develop the supporting characters.

After “Deceit”, I’ll be reading Star Wars Legacy of the Force “Fury” by Aaron Allston. “Legacy of the Force” has been a surprisingly good run of Star Wars novels.  “Fury” is the seventh book in a nine book cycle.  I’ll have to write a post about this series sooner or later.  I’m loving it! After that, I’ll probably read “Indiana Jones and the Genesis Deluge” by Rob Macgregor.  I’ve purchased the book and read the first few pages.  Even though I was only a few pages in, I found it really compelling.  I can’t wait to get around to this one.

3 thoughts on “Novels I’ve Been Reading”