Great Time to be an Old-School Comics Fan

We are truly living in magical times for old-school comic book fans.  Many of us grump and groan about how things were better “back in our day”.  Well, I’m here to tell you that things are great today even for people like us!

While I still keep up with numerous monthly titles, there are dozens of older comics that I think back on fondly.  In recent years, new media has emerged to celebrate these older books.  I often think about going back and re-reading an entire run of one particular series or another.  However, I don’t usually have the time given that I keep up with a lot of new material that also interests me.  Thankfully, I can now recapture the sense of wonder these old comics brought me by following things like the Word Balloon podcast & Back Issue magazine.  Additionally, the current comic book era provides readers with incredibly easy access to older material they may not have read. These reprints make it easier than ever to read comics you missed.  Finally, the internet has proven to be invaluable in researching particular comics or storylines. 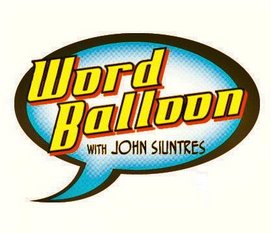 From the Word Balloon web site – Created By Chicago Talk Radio Host John Siuntres, The Word Balloon podcast features one on one mp3 audio interviews with comic book creators, plus the creative minds behind Film, TV, Gaming and other media.

Simply put, if you are a comic book fan and you are NOT listening to Word Balloon… then you are broken.  John Siuntres is a fantastic interviewer and really gets the inside scoop on comic books.  Whether you strictly enjoy old school comics or read the new stuff too, there has been an interview or two that you’d be interested in.  Some reoccurring guests of his include: Geoff Johns, Brian Michael Bendis, Greg Rucka, Mark Waid, Matt Fraction, Jepf Loeb, and Ed Brubaker.  And that’s just the guys who come back on a semi-regular basis.  He’s done tons of non-reoccurring interviews with modern day and Silver Age greats such as: Chuck Dixon, Robert Kirkman, Beau Smith, Marty Pasko, Kurt Busiek, Steve Rude, Neal Adams, Ethan Van Sciver, Marv Wolfman, Walt Simonson, Steve Englehart, Ron Marz, Mike Grell, Denny O’Neil, Mike Mignola, Brad Meltzer, Gail Simone, Dan DiDio, Joe Quesada, and the list goes on and on.  The nice thing about this format is that the recordings remain posted on the web (over 150 to choose from), so you can listen to any of them anytime you’d like.

Siuntres has an amazing rapport with his guests and they typically cover their landmark works, any relevant background and anecdotes, how they got into comics, and what lies in their future.  The interviews are compelling and well done.  It’s great to relive some of your favorite comics through the eyes of their creators and you often find out things you never knew about them.  I can’t recommend Word Balloon to you enough.  Even if you don’t have an MP3 player, you can download the episodes and listen to them on the computer.  The most recent interview (at the time of this writing) is with Ethan Van Sciver on his upcoming projects, “Green Lantern: Blackest Night” and “Flash: Rebirth”.

From the Back Issue web site – Back Issue celebrates comic books of the 1970s, 1980s, and today through a variety of recurring (and rotating) departments.

Back Issue is another product that does a great job celebrating the comics of yesteryear.  There are several different “departments” within the magazine, such as: “Flashback” which revisits the plotlines, creators, and characters from older series; “Pro2Pro” where two comic professionals interview each other (more like a conversation); special features, straight-forward interviews; “Greatest Stories Never Told” that discuss storylines that were planned out but never came to be; art galleries; and “Back Talk” an honest-to-goodness letters page (just like in the old comics themselves!).  Each issue is themed, such as the current issue on the shelf #29 – “Mutants Issue”.

The “Mutants Issue” has a couple perfect examples of why this magazine is so great.  There is a fantastic seven page article on “The New Mutants”.  While I would love to take the time to re-read all 100 issues of this comic, it’s not likely to happen anytime soon.  However, this article distilled down the major story points from the series, sprinkled with information taken from various creator interviews to give you some inside information you couldn’t gleam from the comics alone.  The article brought back tons of memories of these beloved comics.  So I may not get around to re-reading them, but I can still revisit why I love them so much.

Another example as to why Back Issue is great comes from the four page article on X-Factor.  You may recall the 1986 X-Factor series starred the original five X-Men (including the recently back-from-the-dead Jean Grey).  Well apparently the series was originally envisioned without Jean since she was in the hereafter.  They had planned for Dazzler to fill the “babe” slot in the series, along with the other four remaining original X-Men.  The idea to bring back Jean came from an incredibly unlikely place… Kurt Busiek, believe it or not.  Back when he was simply a fan he shared his idea for Jean’s resurrection with Roger Stern, who passed the idea on to John Byrne, who eventually passed the idea on to Bob Layton (writer of X-Factor).  And thus Jean Grey’s revolving door with death began.  Hard to believe that Kurt Busiek, a writer who didn’t become well known until the mid-1990s, was responsible for Jean Grey’s return in the mid-1980s.

Like Word Balloon, I can not recommend Back Issue to you enough.  I promise if you pick up an issue, you’ll find at least a couple things inside to interest you (if not the entire magazine).  The next issue ships in September and is the “Saturday Morning Heroes” issue in which they discuss Captain Marvel, Super Friends, Super Powers, Space Ghost, Astro Boy, and more!

Whether it be color trade paperbacks, absolute editions, omnibuses, black-and-white Essentials/Showcases, or Marvel’s digital platform… it’s easier than ever to catch up on comics you missed.  All the publishers have become very savvy with their release schedules and delivery channels.  You can typically find newer stories collected and in stores just months (sometimes weeks) after the final issue shipped.  Additionally, publishers are focusing on reprinting older material and making it easier to get.  Nowadays, you can find trade paperbacks for sale in just about every bookstore.  For me personally, I have a bizarre soft spot for “Marvel Team-up”.  Don’t ask me why, but I do.   I only read a handful of issues growing up, so I picked up the first two volumes of the “Essential Marvel Team-up” to read more of these old stories.  Sure they are corny, but I’m loving these collections.  Other black and white reprints I’ve picked up in recent years include: Showcase Presents Aquaman #1; Showcase Presents Metal Men #1; Showcase Presents The War that Time Forgot #1; Essential Marvel-Two-in-One #2; Essential Avengers #2; and Showcase Presents Batman & the Outsiders #1.  I’ve also been getting the Dark Horse color reprint collections of the old Marvel “Star Wars” comics.  Even though I have the original issues, it’s so much easier to read these collections rather than dig out the originals from the bottom of a seven-high tower of long boxes.

Finally, it bears mentioning how much the internet has changed comic book research.  In the old days, if you were curious about a particular comic storyline, you had to hunt out the back issue to find out what really happened.  For example, during my youth I spent years collecting old Uncanny X-Men comics from the early 80’s just to get the complete understanding of X-Men history.  With the proliferation of the internet, you can simply hit Wikipedia (or one of many other sites) and the entire history of a character or comic is chronicled in a neat package for you.  No longer do Editor footnotes referencing obscure comics confuse the reader.  Just a couple clicks away and you can know exactly what happened in any comic.  This can be a blessing and a curse.  I’ve found myself choosing not to seek out a back issue or trade paperback because I could read a summary of what happened on the internet.  While that clearly saved me some greenbacks, I did miss out on enjoying a classic tale.  It’s also an easy way to run across unfortunate spoilers.

Throw all this together and you’ve got a new golden era from the long-time comic book reader.  For example purposes, let’s say the FLASH WEEK I ran a couple weeks ago really got you jonesing for some old Flash.

Let’s shake off the reputation for our curmudgeonly attitudes and celebrate!  It truly is great to be an old-school comic book fan right now.