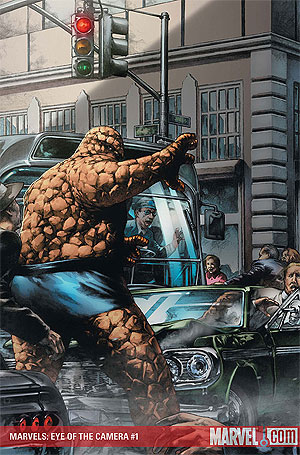 Marvels was an award-winning publishing sensation in 1994 that made Kurt Busiek and Alex Ross into stars.  Coming in December is the long-awaited sequel, Marvels: Eye of the Camera by Kurt Busiek and Marvel-newcomer Jay Anacleto.  Now this is a comic worth getting excited about folks!

Marvels examined the Marvel Universe from the perspective of an ‘everyman’, news photographer Phil Sheldon. This street-level series portrayed ordinary life in a world full of costumed supermen, with each issue featuring events well-known to readers of Marvel comics as well as a variety of minute details and retelling the most infamous events in the Marvel Universe. In addition to the strong storytelling, the book featured amazing photo-realistic renderings by Alex Ross which took the comic book reading community by storm.

Here is the description of the six-issue mini-series Marvels: Eye of the Camera from Marvel Comics …

News photographer Phil Sheldon’s back, with the man-on-the-street’s perspective on the big events of the Marvel Universe, from the Avengers, the all-new X-Men and the Secret Wars to Dracula and the Werewolf By Night. But this time, Phil’s world is going to be rocked not just by superheroes and super-villains — but by something far more personal, as well.

This sequel has been in the works for a long time.  Originally it was scheduled to come out in early 2004 (as noted in this Newsarama interview with Kurt Busiek from 2003).  Fast forward nearly five years later and it’s finally ready to hit the shelves!  According to Tom Brevoort, it’s been slowly worked on all this time; they didn’t stop and start, they just didn’t do a lot quickly.  When asked if the plot had remained the same from their original 2004 plan, Brevoort said yes, you could almost go back and reprint the article from five years ago.  Therefore go ahead and read the 2003 Newsarama interview with Kurt Busiek for more details on this series.

Marvels: Eye of the Camera looks to be another phenomenal comic from Kurt Busiek.  In addition to Marvels, Kurt Busiek has written his own fantastic series called Astro City which often features superheroes from the perspective of the ‘everyman’.  Busiek has a special talent for believably showing how superheroes can impact the normal life of the man on the street.

In regard to the artwork, some of you may be thinking that without Alex Ross it won’t be any good.  Admittedly, I was concerned myself when I saw he wasn’t attached to this project.  However, if you look at the three cover images here, I think this project is in good hands with Jay Anacleto.  While he’s different from Ross, Anacleto appears to do a very good job mixing photo-realism with superheroics.

Personally, I almost missed hearing about this series altogether.  Maybe I haven’t been paying attention, but I haven’t seen much publicity surrounding this book.  In fact, the only promotion I’ve seen was the listing in the Marvel Previews catalog.  Surprisingly, it didn’t make the cover (instead we got ‘X-Infernus’ & ‘Punisher War Zone’) and no ads.  If I didn’t catch the listing buried on the bottom of page 41, I wouldn’t have known this was coming out at all. I’m not sure if the lack of promotion was simply an oversight from Marvel, or if they are hesitant about this series for some reason.  I imagine Marvel is worried that without Alex Ross this new mini-series might fail.  Or perhaps they are concerned about this book shipping on time.  During an August interview with Brevoort, he indicated that Anacleto was halfway through drawing issue #5.  Sure hope he can finish in time.  If he took five years to draw four and a half issues, who knows how long it will take him to finish issues five and six.

I am sincerely looking forward to this series.  I recommend to everyone who has read Marvels to at least give this book a shot.  If you haven’t read Marvels… then you’re broken.  Plain and simple. Go buy a copy right now and come back when you are fixed.  🙂

Visit us here at ONCE UPON A GEEK tomorrow when we talk about another publication from Marvel that is equally as memorable as Marvels, but not remembered nearly as fondly…

One thought on “Kurt Busiek Sequel to ‘Marvels’ This December”