BLUE DEVIL WEEK continues here at Once Upon a Geek! Today we’ll be spotlighting some of my favorite comic book covers related to Blue Devil. Also, be sure to come back tomorrow for a 90-minute audio interview with the creators of Blue Devil and Amethyst, Dan Mishkin & Gary Cohn!

Here is the cover to Blue Devil #1.  Paris Cullins did a great job laying out this cover.  You’ve got the heroic pose in the foreground, the background telling the story, and the film strip at the bottom with the supporting cast.  Well done!  A real classic! 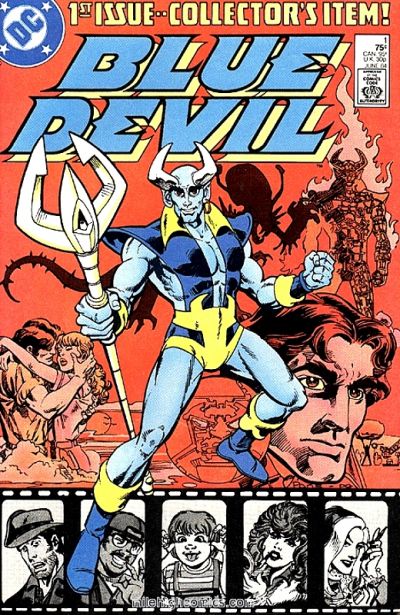 I can’t explain it, but there is something magical about issue #2 comic covers from the 1970s & 1980s.  I’m not just talking about Blue Devil, but almost any issue #2 from the 70s/80s.  I feel the same way about the covers of Firestorm #2, New Teen Titans #2, West Coast Avengers #2, and so on.  Back then issue #1 was usually self-contained, so issue #2 was almost like a sequel. I’m a sucker for sequels, so maybe that’s part of it.  Anyone else feel this way?  Regardless, another great cover by Paris!  Blue Devil’s facial expression is really cool.  He looks really tough.   This is also the start of snarky caption boxes on the cover.  We’ll see a few more as the series progresses. 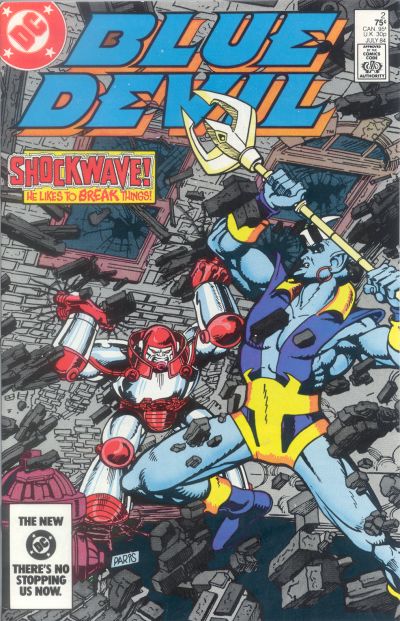 It was nice that Blue Devil was placed so firmly in the DC universe early on.  You can see the guest stars listed on the cover below and Zatanna featured prominently.  Paris’ rendition of Zatanna is still the definitive version in my mind.  I also like the shadows playing across the characters on this one.  Better watch out Danny for Nebiros and the snarky caption box! 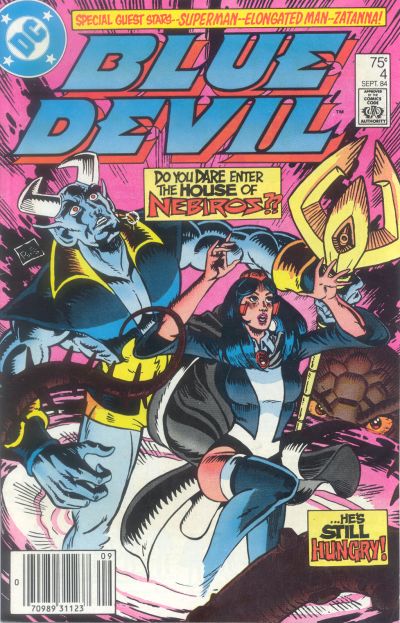 I always love seeing Blue Devil fly into action with his trident!  It was a very unusual way for a hero to get around back then.  Another great Paris Cullins cover (also featuring Zatanna), but what really puts this cover over the top is the snarky caption box.  “And just for good measure — A Special Guest Star: THE MEXICAN ARMY!”  LOL! 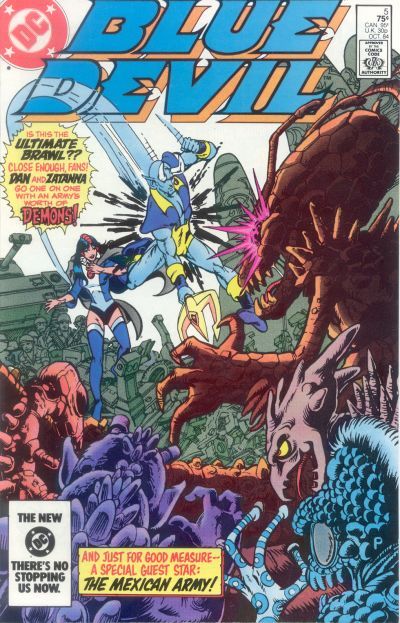 Issue #6 is where the humor of Blue Devil really hit its stride.  The cover does a phenomenal job reflecting that.  I love the use of the word balloon on the cover.  By 1984, word balloons on covers were fairly unusual.  They were best used for humor (or villains so over-the-top it was funny).   Paris did an awesome job with Blue Devil’s body language and all the background detail work.  One of my absolute favorites! 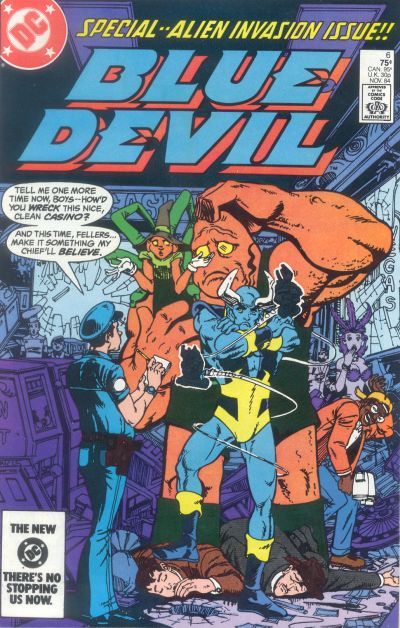 I’ve displayed issue #7’s cover here before, but it’s worth showing again.  Again, the humor was firing on all cylinders at this point. This is where the Trickster begins to play a reoccurring role in Blue Devil’s life.  Paris did this cover, even though he was no longer the regular artist on the interiors at this point.  My favorite bit is again the snarky caption box, “… and a 1959 Pink Cadillac in PERFECT CONDITION!”  I find that hilarious!  I can understand how difficult it would be to get a 1959 Pink Cadillac in mint condition in real life, but in a comic?!?!  Too funny! 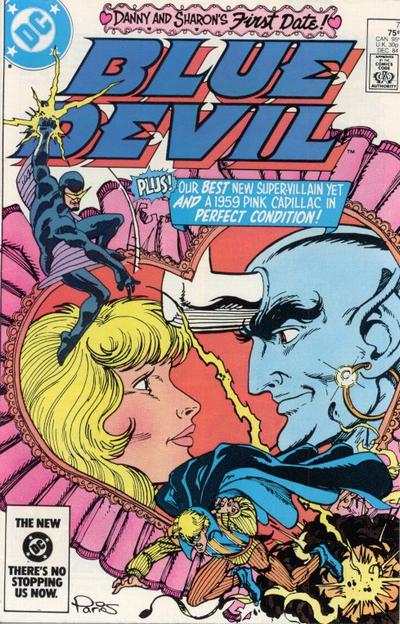 Probably my favorite Trickster comic cover ever!  Paris has a way of drawing dynamic scenes, yet they have a slight cartoonish look about them.  Mishkin & Cohn’s idea for a bank robbery in mid-air — Genius!  This issue is a laugh riot.  You should read it, and then read it again. 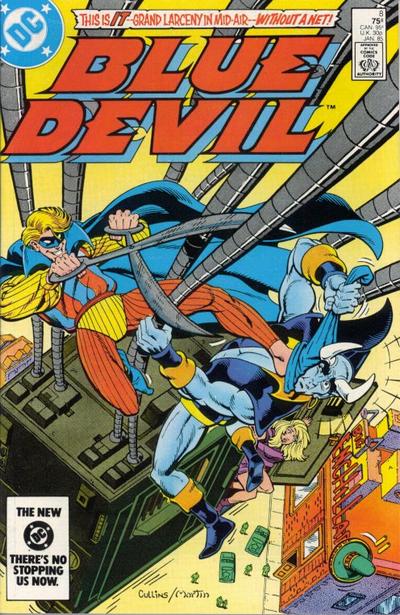 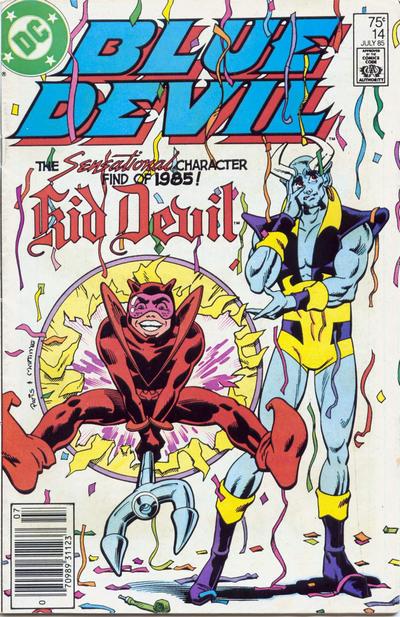 Fantastic drawing of Marla!  Paris really nailed the look of her struggling to keep these two apart.  And another hilarious snarky caption box! 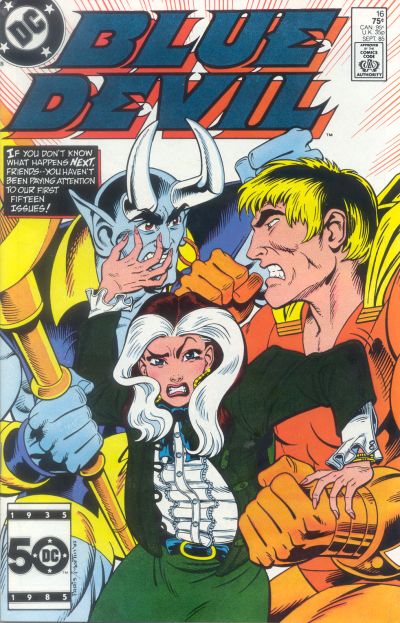 Blue Devil + Firestorm?  What else could an Irredeemable Shag ask for?!?!  Great cover!  I love the shadowing on this piece, and Firestorm’s got Kirby dots!  KIRBY DOTS!  Hooray! 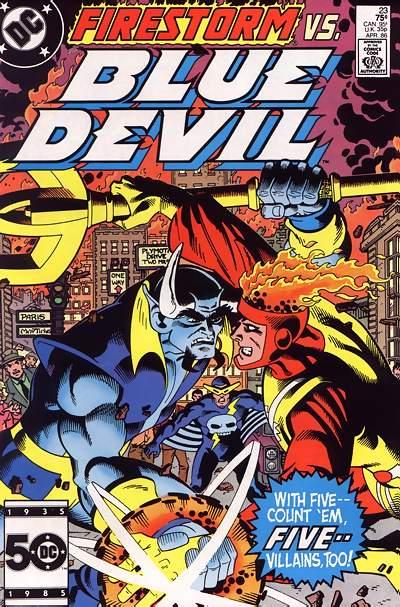 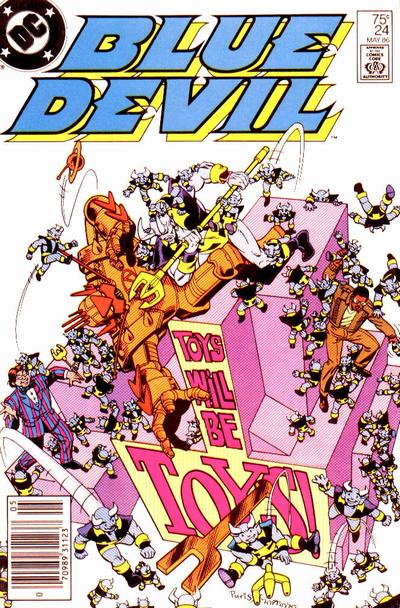 The Blue Devil Summer Fun Annual #1 is where it all came together.  Dan Mishkin & Gary Cohn brought the humor and the adventure, while Paris Cullins brought his amazing artistry.  This comic is phenomenal!  Do yourself a favor and pick up this book. If you own it already, go re-read it.  It’s witty, fun, and full of action.  The best single issue of Blue Devil! 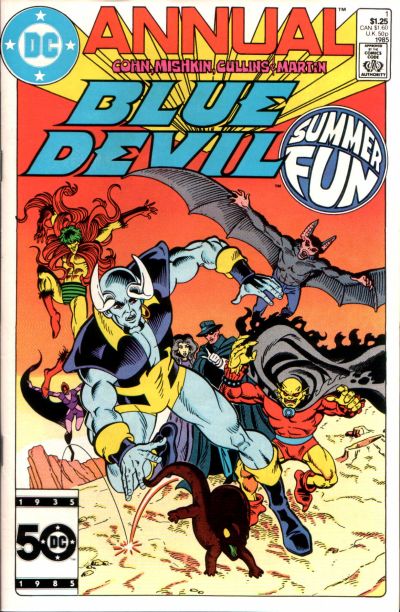 Here is Blue Devil from his JLA days, but before his awful second costume. I liked Wojtkiewicz’s style.  It was somewhat cartoonish, like Paris Cullins’ style. 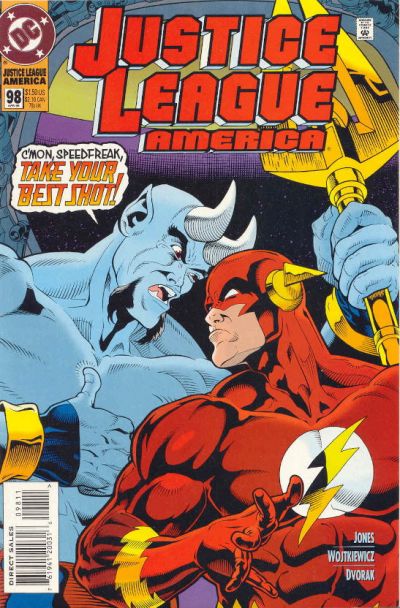 This Shadowpact issue is where they really started to develop Blue Devil. 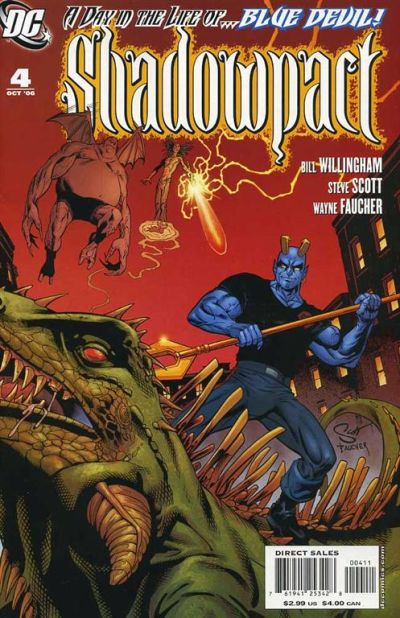 This Shadowpact cover is just awesome.  Blue Devil looks smaller than usual, but is cranking out so much power.  Very nice! 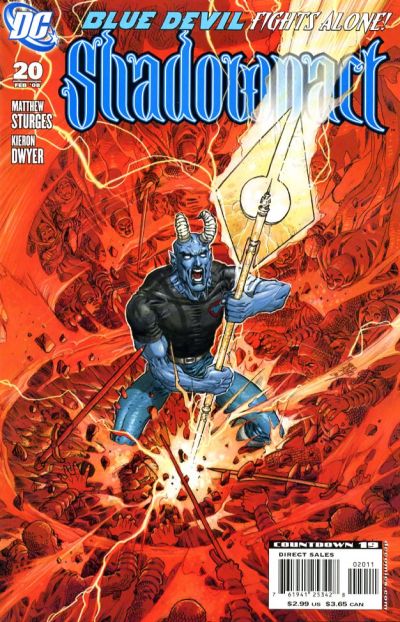 I like this Justiniano cover of Blue Devil battling Etrigan.  During the Shadowpact series they built a rivalry between these two demon characters. 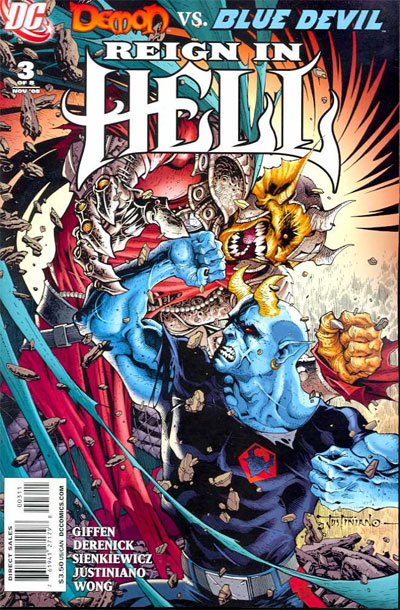 That’s all the covers for now.  Tomorrow wraps up BLUE DEVIL WEEK with a 90-minute audio interview with the creators of Blue Devil and Amethyst, Dan Mishkin & Gary Cohn! See you then!