I’m in the Doctor Who Role-Playing Game!

I finally got my copy of the Doctor Who: Adventures in Time and Space Roleplaying Game, and turns out I’m in it!  Well… I’m not exactly IN the game, but I am mentioned in the credits and some of my playtesting group’s contributions made it into the game!  Sorry to subject you to what follows.  I’m not trying to brag, I’m just sharing my excitement!  Here is a picture of me going all Gollum with my new prize.

I’ve only just started flipping through the set, but I gotta say this is a truly gorgeous game!  Each book has glossy, full-color pages.  There are several loose character sheets, each printed on heavy-cardstock.  There are punch-out cardboard tokens for Story Points.  It’s just well put together and beautiful.  For a video walk-thru of the box set contents click here.  For a seven-page PDF preview of The Player’s Guide, click here.  I’ve only scratched the surface of the contents and can’t wait to read it cover-to-cover.  For now though, here are a few things I’ve noticed that relate to my playtesting group…

Here are the credits listed on the inside cover of The Player’s Guide. 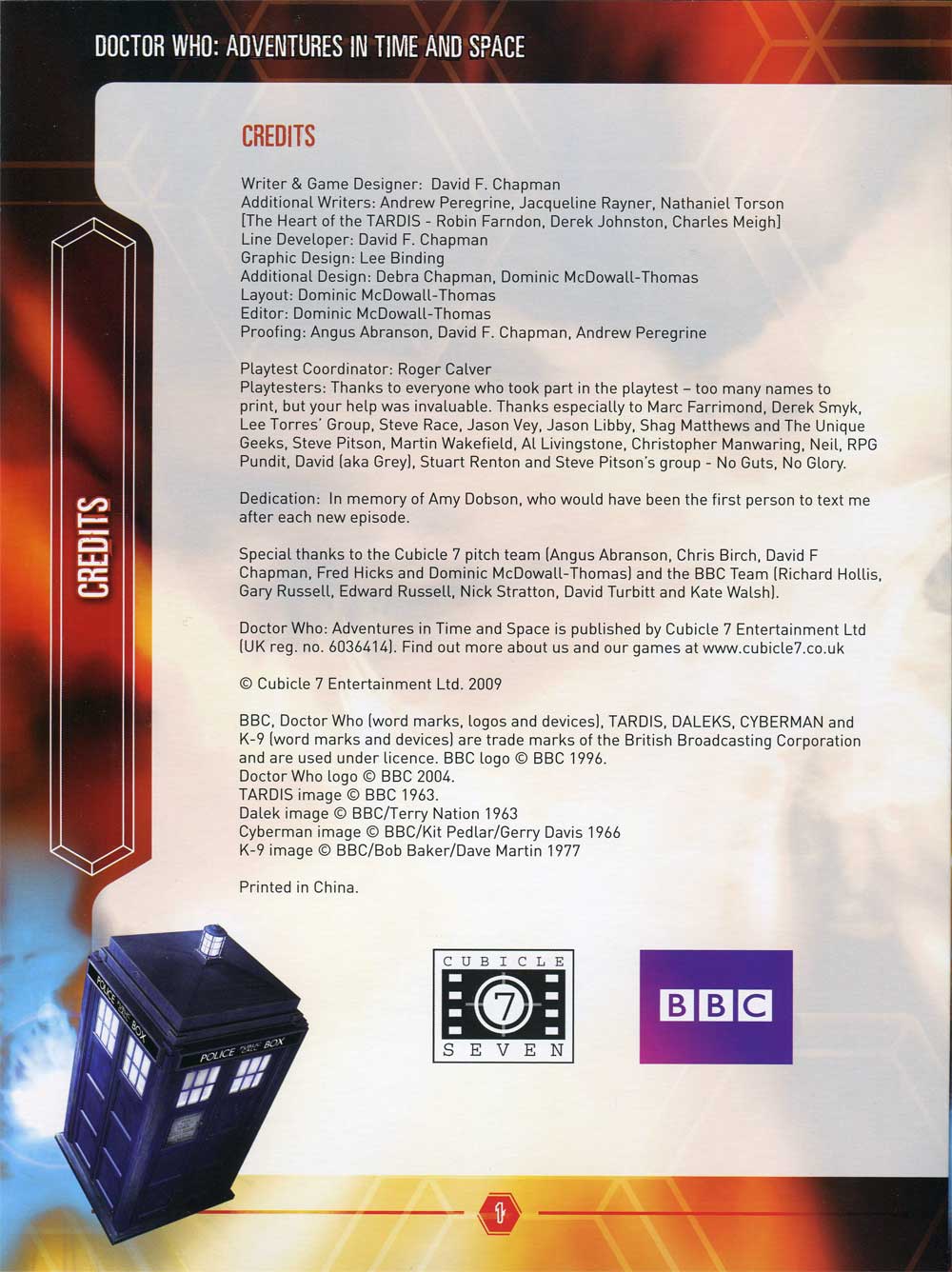 And a close up on the Playtester’s paragraph…

Hooray!  My thanks to Cubicle 7 for the shout-out!  My group, called THE UNIQUE GEEKS, consisted of Sterling, SGhoul, Scott C, Shavenger, and myself.  We read through early drafts of the rules, ran a few adventures, and created lots of characters and gadgets.  Then provided feedback to Cubicle 7 on all of this.  I’m happy to say some of our contributions made it into the final draft!  Now, I hope I’m not breaking some unspoken playtester rule by talking about which contributions were from my group.  If so, I deeply apologize to the almighty playtester gods and humbly offer to sacrifice myself on the altar of the omniscient 20-sider.  Additionally, I’m not trying to take anything away from David F. Chapman or the folks at Cubicle 7.  They’ve created a great game and deserve to be praised for everything they did.  They did all the heavy-lifting creating the game from scratch, we just came along and piggybacked on their ideas and made a few suggestions.  I’m honored to have been invited to the playtest and honored that the folks at Cubicle 7 thought some of our suggestions were good enough to include.

For one particular adventure, I developed four different gadgets.  Gadgets are unique devices or tools characters carry with them for specific purposes.  While going through the new box set, I was blown away as I stumbled across two gadgets I created printed right next to the Sonic Screwdriver and Psychic Paper!  Wow!  I created the “Engineer’s Mate” and the “Engram Eraser”, both shown below.  Click the image to enlarge.  I created these gadgets for an earlier draft of the rules, so some of the stats have changed since I came up with the concepts.  However, the gadget name, traits, and purpose remain the same.  My compliments to whoever wrote the descriptive paragraph.  They did a great job taking the idea and explaining it succinctly and effectively.  Nicely done!

You can’t tell from this scan, but each gadget on the page below is perforated so you can pop them out of the page!  So cool! 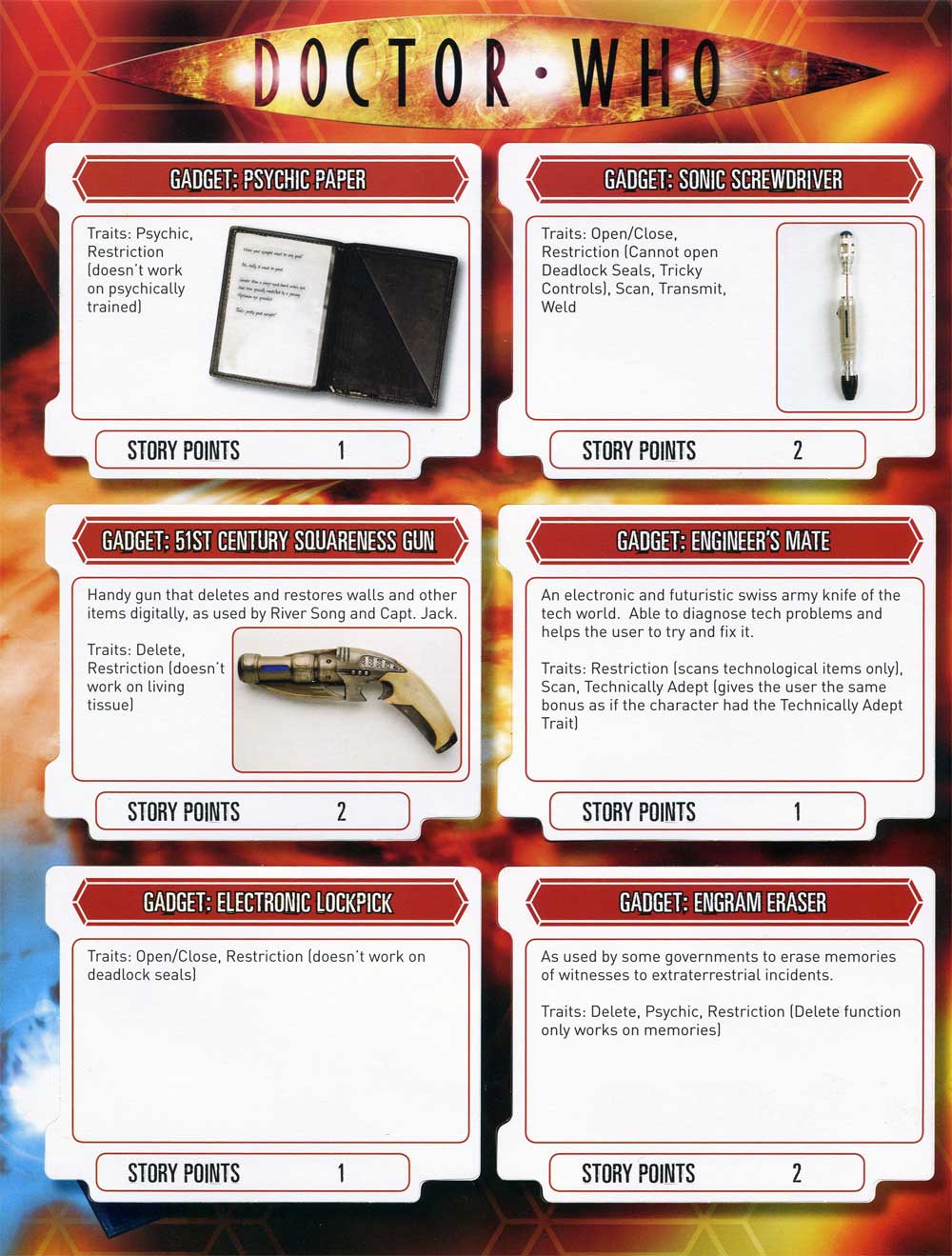 One of the areas we provided lots of feedback and suggestions on was “Traits”.  I’ve noticed looking over the new box set that several of the “Traits” we suggested have been incorporated.  Now it’s quite possible that several other playtesters suggested the same particular “Traits” that we did, so I’m not claiming that we’re solely responsible for these.  “Traits” we suggested that appear in the final game include: Sense of Direction, Animal Friendship, Owed Favour, Unattractive, Owes Favour, Argumentative, Dark Secret, Impulsive, and Selfish.  Again, my compliments to whoever wrote the lengthy descriptions for each of these.  We just shared a germ of an idea from a game mechanic perspective, whereas someone at Cubicle 7 beautifully wrapped explanations and examples around it.

That’s it for now.  I’m going to take a deep-dive into these books and savor every detail!  In fact, I may be so wrapped up in this game that I fail to post here for a few days.  🙂

9 thoughts on “I’m in the Doctor Who Role-Playing Game!”