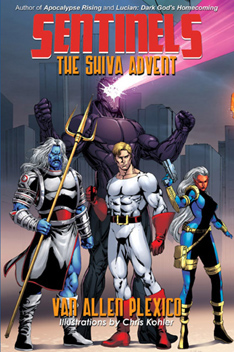 Van Allen Plexico’s latest novel, Sentinels: The Shiva Advent, is an engaging and fun read. At first I was unsure whether I’d enjoy the book as I’m not usually a fan of superhero prose. Compounding my concern was the fact that this is the fifth book in the Sentinels series and I haven’t read any of the previous volumes. Well … I’m pleased to report that I was enthralled before the first chapter was over! The mysteries presented early on compelled me to continue and I found myself wanting to learn more about the interesting characters.

This novel makes a great jumping on point in the adventures of the superhero team called the Sentinels. In the first chapter, the team is decimated by a murderous robot called the Vanguard. The rest of the novel features the rebuilding of the team either through rescue or the addition of new members. The story concludes with a huge confrontation against Vanguard. This is an ideal scenario for someone new to the series like me. By tearing apart the team, it provided an opportunity to learn about each hero individually and to be on the ground floor for the new characters.  The Sentinels team features several of the typical superhero archetypes (i.e. super-strong flying man, displaced god, armored avenger, etc.), with some characters having direct analogs amongst Plexico’s favorite team, Marvel Comic’s Avengers. In fact, the title character Shiva has many characteristics in common with the mighty Thor.  While some characters may be representative of established heroes, they are not mere carbon copies.  These characters have original back stories and interesting personalities.

I was shocked that once I started the book I couldn’t put it down.  As I mentioned, I’m not typically a fan of superhero prose, but Plexico has somehow managed to capture the essence of comic book adventures using only words on a page.  While the story is evocative of the superheroic Bronze Age of comics, it lacks the corniness that sometimes accompanied those tales of yore.  You’ll find the spirit of Stan Lee’s characters and Roy Thomas’ plots living-and-breathing in Van Allen Plexico’s writing.

The novel represents the first chapter of “The Rivals” trilogy and features a great cliffhanger.  If you love old school Avengers tales, especially ones dealing with cosmic forces, then this book is for you.  Sentinels: The Shiva Advent was published by White Rocket Books in 2009 and is available by clicking here.