Blue Devil is coming to the Justice Society!  Hot dog!  Apparently new writer Marc Guggenheim is interested in expanding the team roster.  According to this article on Comic Book Resources, it appears everybody’s favorite “weirdness magnet” is set to the join the team in just a couple weeks with Justice Society of America #46. 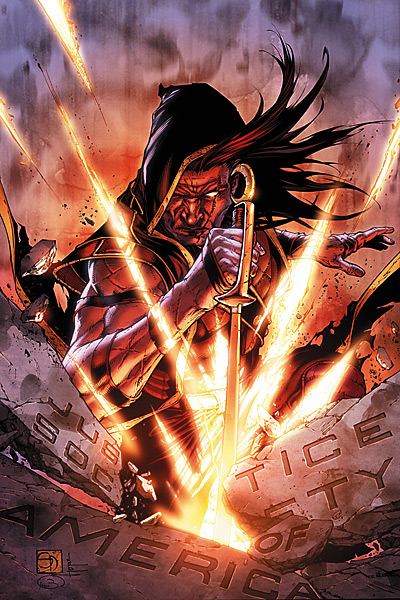 Here is the relevant information:

New heroes begin joining the team with December’s issue #46, which sees the addition of Blue Devil.

Here is the entire paragraph to give the announcement some context:

As the writer himself said, that ultimate vision involves an expanding roster. New heroes begin joining the team with December’s issue #46, which sees the addition of Blue Devil. Guggenheim also teased the return of Mr. America, a character introduced in the title’s very first issue almost exactly four years ago. However, the biggest addition Guggenheim revealed involved “a cameo that will eventually expand” from vigilante and fan-favorite character Manhunter. “I don’t want to spoil everything,” laughed the writer. “I think I’ve already spoiled too much. One of the fun things about reading the book is seeing who is going to turn up in the pages. My hope is that by the end of the first arc, we’ll establish the ‘Justice Society of America’ as a book where anyone can appear and anyone can be a part of the book.”

Here is the full solicitation for the issue:

JUSTICE SOCIETY OF AMERICA #46
Written by MARC GUGGENHEIM; Art by SCOTT KOLINS; Cover by SHANE DAVIS & SANDRA HOPE
With Monument Point still down after Scythe’s devastating attack on U.S. soil, looting begins! Enter Collatoral Damage, a new team of villains set to lay claim to the riches yet to be found in the rubble of the once great American city! Luckily, there are new heroes flooding into the JSA’s new hometown to help stabilize and rebuild alongside Earth’s First Super Hero Team!
On Sale December 29, 2010

I can’t wait for this!

Thanks to Dave Tomko for bringing this announcement to my attention.  Thanks, Dave!

3 thoughts on “Blue Devil Coming to the Justice Society”