I love me some JLA & JSA.  In fact, I’ve been building a DC Direct action figure collection of these two teams for years.  After seeing my buddy Michael Bailey (Views from the Longbox & Fortress of Baileytude) post some pics of his figures, I thought I would take you on a tour of some of mine.  This is by no means all my figures, just some that I have on display.

So follow me weary reader through the door into the back room of the house.  You unlock this door with the key of imagination. Beyond it is another dimension – a dimension of plastic, a dimension of multiple points of articulation, a dimension of facial expressions that look as if the character is constipated. You’re moving into a land of both shadow and substance, of things and ideas. You’ve just crossed over into … Shag’s Comicatorium (also known as Shag’s Sanctum Sanctorum). 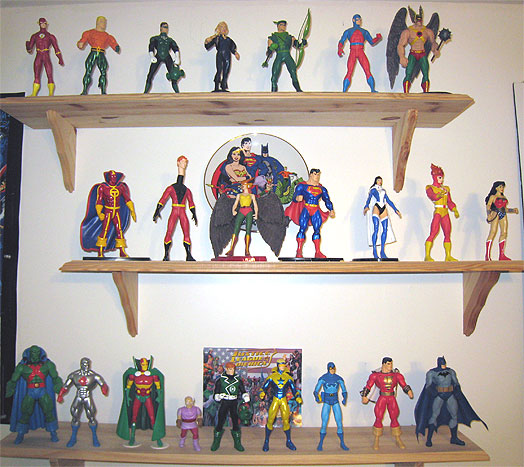 Notice Johnny Thunder and Mr. Terrific are tiny. These are from the PVC JSA set that came out a number of years ago.  They have not yet made full size action figures of these two characters, so I leave those PVC figures in.  Also, in-between the shelves I hung my cool Mike Parobeck “Justice Society of America” mini-poster promoting the series that only lasted 10 issues.  Also in the long shot below, you can see beneath the JSA figures is a framed original drawing of Alan Scott Green Lantern by his creator Marty Nodell. 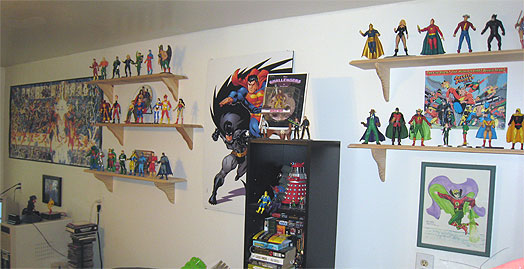 In this long shot, you can see how the Comicatorium is laid out.  From left to right:

If you are wondering, the term Comicatorium was first coined by Serv and I when we lived together in college.  It was used to describe the dining room that had become the dumping ground for all comic-related items.  That was a great room.

So as you can see above, I’m pretty much a … well … a real freak. But it makes me happy.  Maybe another time I’ll post pictures of all my Doctor Who stuff.  Now that will definitely scare the normal people.