For all you “Aquaman” haters out there, a special request from me…  Please resist your natural instinct to simply skip reading this post.  The TV show was surprisingly good.  After reading this post, who knows… you might find yourself willing to give it a try.  C’mon, live a little! 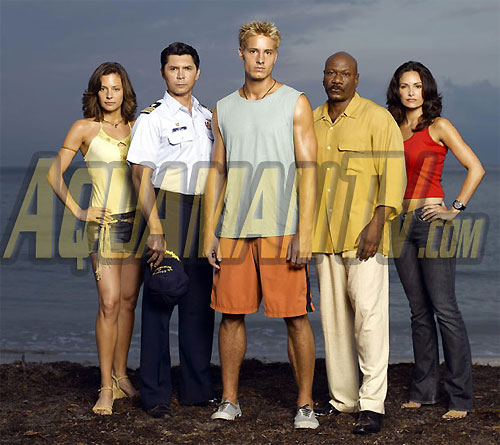 Until the other day, I had never seen the live-action “Aquaman” failed pilot from 2006. Here was a show that conceptually should have been really bad. After all it spun-out of Smallville, was not picked up by WB/CW, and c’mon… it’s Aquaman. Let’s be realistic, even though I love the character, how good could a show be about a guy who can talk to fish, right? And if WB/CW turns you down, you know there must be issues.

The amazing thing is that it was actually pretty good. Well, at least as good as Smallville back when it was at its best. Even my wife enjoyed the pilot, expressing that she would watch further episodes if there had been any. This says a lot since she’s not a geek and typically doesn’t enjoy the same shows as me.

After seeing the Aquaman pilot, I’m surprised it didn’t get picked up by WB/CW. The formula for the show was similar to the popular Smallville: a likeable hunky hero with secret powers; a mysterious past even the hero isn’t fully aware of; lots of angsty scenes; strong supporting characters; good special effects; and beautiful women everywhere you turn. On that last note, having the show take place in the Florida Keys allows for a built-in mechanism to show girls in bikinis constantly. You’d think that would have resonated with the WB/CW execs. Even the proposed titles followed the formula; the working titles for this show were “Mercy Reef” and “Tempest Key”.

During season five of Smallville, they did an episode featuring Aquaman. Turns out that was the highest rated episode for the season. While the Aquaman pilot wasn’t exactly a spin-off from this episode of Smallville, it was inspired by it. For the Aquaman pilot, the creators kept some of the same concepts from the Smallville episode, but changed the character of A.C. around a bit and got a much better actor.

The basic premise is that A.C. (short for Arthur Curry) is able to breathe underwater, is extraordinarily strong, can sort of sense feelings from sea life (at least dolphins), and can swim at amazing speeds (we see him swimming and keeping pace with a fighter jet at one point). Though he makes efforts to protect the ocean and sea life from time to time, for the most part he’s a slacker with no direction. He’s in his late teens/early 20s and he’s passing time working in a bar and running a dive shop in Tempest Key, Florida. He’s been aware of his powers all his life, but was not aware where they stem from. By the end, he discovers that he’s an exiled Atlantean Prince and that his life will be full of danger now that his fellow Atlanteans know where to find him. He agrees to allow the local lighthouse keeper (also an exiled Atlantean) to help prepare him for the challenges to come.

There was a neat subplot hinted at in the pilot about the Bermuda Triangle and a possible connection to Atlantis. As viewers we were witness to a few people acting strangely that had apparently disappeared in the Bermuda Triangle decades ago, yet were back now and hadn’t aged a day. There was a FBI agent investigating these phenomena and he was trying to recruit a fighter pilot that A.C. had saved. Looks like this could have unfolded into an interesting plot.

The episode had a great cast. A.C. was played by Justin Hartley who later went on to star in Smallville as Oliver Queen (a.k.a. Green Arrow). Hartley really did an great job in all his scenes. Whether he was swimming underwater or above the surface, you could feel a connection with him. He was just as good as Tom Welling (Clark Kent in Smallville), if not better. A.C.’s adopted father was played by Lou Diamond Phillips; the lighthouse keeper and mentor was played by Ving Rhames; his best friend/co-worker was played by Amber McDonald; the investigating FBI agent was played by Rick Peters; and a potential love interest/fighter pilot was played by Denise Quiñones.

One of the things I’ve always liked about Smallville is how Clark is always dressed in red and blue. This is done to provide almost a future echo to the viewers as the colors represent Superman’s costume. The same was done here with A.C. He’s always wearing green and orange. I know it’s a bit corny, but I love these kinds of comic book nods.

Funny aside… while the credits were rolling on Aquaman, my wife noticed the name Patrick A Duffy as a First Assistant Director. Well, if you know your Aquaman history, Patrick Duffy (from eventual “Dallas” fame) played in a TV show called “Man from Atlantis” which was basically a live action Aquaman TV show in the 1970s. Turns out the Patrick A. Duffy from the Aquaman pilot is a different guy than the Patrick Duffy from “Man from Atlantis”. Oh well. It still gave us a chuckle to think he would have been involved in this production.

Interestingly enough, the creators of the Aquaman pilot felt so strongly about it (even after being turned down by WB/CW) they released it via the web. It premiered on iTunes and was the most downloaded TV show for over a week. Additionally, it’s been released through other online platforms and done extremely well with those too. Pretty impressive for a guy who can talk to fish. 🙂

While there are no plans to pick up this show or concept again, it really merits watching. You can find it through a number of various methods. If you are a comics fan or ever enjoyed watching an episode of Smallville, I urge you to give this a try. I don’t think you’ll be disappointed.