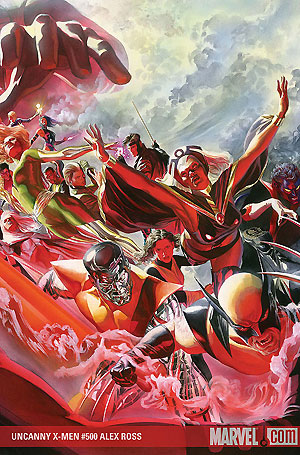 I picked up the recent Uncanny X-Men #500.  I used to be a major X-junkie.  We’re talking MAJOR junkie.  I’d read every single Uncanny X-Men story from Giant-Sized X-Men #1 (1975) through Uncanny X-Men #320 (January 1995).  While I only started reading the series in 1983, I’d gone back and read all the earlier stories.  This includes most of the spin-off series as well; New Mutants, X-Men Classic, X-Factor, X-Men (adjective-less), Excalibur, X-Force, Generation X, tons of mini-series, etc.  So shortly after the Phalanx Covenant I’d just had enough and walked away from 20 years of continuity and over 400 comics.

To start with, it had an awesome Alex Ross cover celebrating several eras of the book.  Well, at least the version I got was an Alex Ross.  The inside notes at least four different variant covers.  Another example of why I walked away previously.  The story was by Ed Brubaker & Matt Fraction.  I hear these guys on the Word Balloon podcast frequently, so I was hopeful this would be good.  The art was by Greg Land and Terry Dodson; both well known for their gorgeous ladies.  So far, so good.

As expected the art is great and the ladies are hot.  By the third page, we get to see a Sentinel, so that’s cool.  The early part of the story provides the reader with a tour of the new X-Men headquarters in San Francisco, along with an explanation of the X-Men’s new found popularity with the masses.  Then the story moves to a swank San Francisco art opening featuring three decommissioned Mark One Sentinels.  Suddenly Magneto attacks and reactivates the Sentinels.  Our heroes are there to protect their new hometown.  Lots of action in downtown San Francisco, ultimately leading to Magneto’s defeat.  It’s discovered that Magneto (who lost his powers a while back) was simulating his powers with an exo-suit designed by the High Evolutionary.  In fact, Magneto’s attack was merely a distraction, and he’s in cahoots with the High Evolutionary in a mysterious plot surrounding a stationary Celestial that’s chilling in San Francisco.  The next day, Cyclops sends out a psychic broadcast (sent via Emma Frost) to all mutants on Earth inviting them to their new headquarters in San Francisco.  The X-Men have turned their headquarters into a mutant sanctuary.  And finally in an epilogue we see some anti-mutant hate crimes begin to appear in San Francisco.

Overall, I guess I pretty much enjoyed the issue.  Nothing like a decisive opinion, eh?  It was definitely a great “jumping on point” and the art was phenomenal.  However, I had some concerns with the issue. First off, Magneto’s attack really seemed ridiculous.  Even in hindsight with his attack simply being a distraction, it seemed forced.  I had a hard time believing this was really the brilliant strategist he had been portrayed as in the past. I honestly expected him to be revealed as an impostor.  I was shocked when it turned out to really be Magneto.

I think my biggest issue with the story was the lack of change within the team.  I stated that I gave up reading the series on a regular basis back in 1995.  Well… not much has really changed since.  In fact, it seems not much has really changed since the mid-80s either.  I can quickly run down the changes to the X-Men that appeared in this book since the “classic” days:

20 years later and those seem to be the only changes to the series based upon this issue.  Now I know there have been TONS of other changes, but they apparently either didn’t stick or weren’t worth mentioning in this issue.  Even things that were changed previously have reverted back to their “classic” state; for example Colossus is alive again, Angel has his feathered wings back, Jean Grey is dead again, and Professor X is absent again (he was always going away for long periods of time in the old days).  By way of example, here is the X-Men roster for this issue:

With the exception of Emma Frost and Cannonball, this is pretty much the classic team.  Since those classic days, they’ve introduced tons of new characters.  Were those characters not popular?  Were they that forgettable?  Who knows, maybe they’ve been de-powered, are on other teams nowadays, or have become villains.  Here are a handful of X-Men from more recent years that I guess didn’t make the cut:

With all that said, I realize that resetting a comic back to its “classic” era is commonplace. Just look at what DC has been doing for quite some time.  I guess I was just disappointed to find the X-Men weren’t that different than I remember.  Most of the time that would probably be a comfort.  But in a team that is known for lots of change and dynamic storytelling, it just seemed somewhat sad that they were taking the “safe” approach by making it too approachable for folks like me.  Part of the fun with the X-Men growing up was being thrown into the deep end with all these characters I didn’t know and discovering for myself who they were and what they were about.  After issue #500, I already know all the characters and there really isn’t much mystery to bring me back.