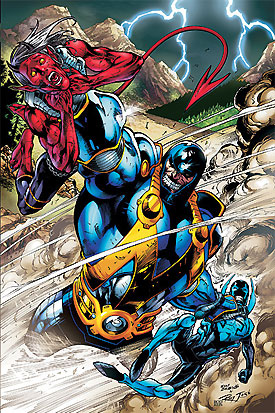 Since Geoff Johns left “Teen Titans”, I’ve felt this was a book looking for direction.  I’ve toyed with the idea of dropping the title from my monthly pull list, but the characters themselves have been interesting enough for me to hang around.  I find the make up of this incarnation of Teen Titans to be quite fascinating:

On this blog yesterday, I talked about how I felt the X-Men weren’t really taking any chances with their roster.  Well, here you have almost the complete opposite.  Besides Robin & Wonder Girl, none of these characters would qualify as “classic” Teen Titans.  I feel selecting these particular D-list heroes was a very brave choice.

This particular incarnation of Teen Titans started during the “One Year Later” storyline towards the end of Geoff Johns’ tenure on the book.  Since then, Sean McKeever has been guiding these characters.  While there hasn’t been any major shake-ups on McKeever’s watch yet, he has been trying to develop the characters further.  For the most part, the character moments is where I’ve been finding my fulfillment from this book.  The overall plots and adventures haven’t been terribly compelling to me.

I found myself pleasantly surprised by this issue.  From early solicitations, I knew they were going to try and popularize the pairing of Kid Devil with Blue Beetle (in the mold of Booster Gold & Blue Beetle).  I wasn’t expected to enjoy this quickly-manufactured relationship, but after reading issue #61 I’m warming to the idea.

The basic premise of this story is that Kid Devil is trying to hunt down the supervillain Shockwave in an effort to prove himself an asset to the Teen Titans.  Kid Devil enlists Robin’s help in honing his own detective skills, rather than asking Robin to be involved in the search for Shockwave.  Kid Devil then fails to uncover a pattern to Shockwave’s attacks, but is able to confront the villain after seeing him on a live news broadcast.  Blue Beetle also shows up to confront Shockwave.  The chip on Kid Devil’s shoulder prevents him from willingly accepting Blue Beetle’s assistance.  The two heroes bicker and basically get in each others way, thus allowing Shockwave to escape.  Kid Devil eventually accepts Blue Beetle’s help begrudgingly as BB’s team figures out the pattern to Shockwave’s attacks.  All the attacks are taking place at former Kord Industries locations.  With that uncovered, Blue Beetle now feels vested in the hunt for Shockwave (as the former Blue Beetle was Ted Kord, owner of Kord Industries).   Shockwave attacks again and our heroes finally work together to stop him.  During the battle, Kid Devil’s frustration allows him to unlock the full might of his demonic powers; including teleportation and transfer of intense heat through touch.  After the fight, Blue Beetle and Kid Devil talk.  Once Kid Devil is made aware that Blue Beetle isn’t romantically interested in Ravager, he’s more than willing to be pals with BB.  During the wrap-up, Blue Beetle accepts full membership on the Teen Titans.  Finally, feeling that he’s earned his place on the team and has truly mastered his powers, Kid Devil takes on a new name and costume… Red Devil! 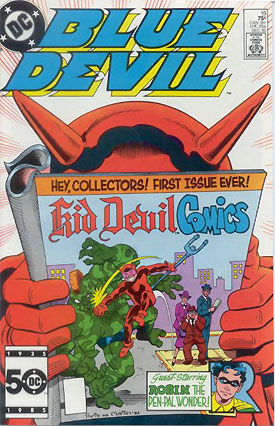 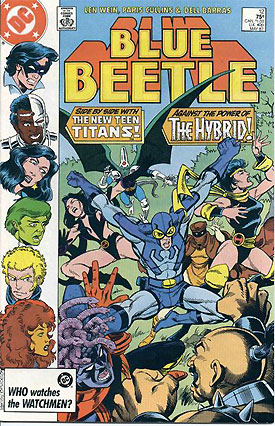 So at the end of the day, I enjoyed this issue more than I have the last several issues of Teen Titans.  I admit I am biased about these characters, so it’s possible I’m giving this particular issue more leeway than it deserves.  I guess next issue will help me determine whether Teen Titans is steering towards greatness, or if I simply read this issue through rose-colored glasses.  Next issue features Wonderdog, so it could go either way.