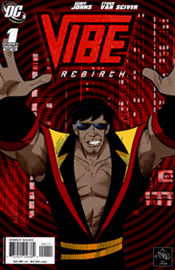 DC Comics announced on Tuesday that a mini-series in December entitled Vibe: Rebirth will re-introduce the once-dead character Paco Ramone, bringing Vibe back for good into the fictional world he left more than 20 years ago.

Unlike other comic book deaths – even Superman went up, up and away for just a year – Vibe was so good at dying that his demise became part of comic book lore. Many fans had come to like the character better dead than alive after he was murdered by a mad scientist’s android in 1987.

Vibe: Rebirth will be written by Geoff Johns with art by Ethan Van Sciver, who orchestrated similar returns of the formerly-deceased Green Lantern Hal Jordan and formerly-deceased Flash Barry Allen.  The return of Hal Jordan in 2005 under the hands of Johns and Van Sciver marked a dramatic resurgence of the Green Lantern comic book, with the title now ranking as one of DC’s best-selling comics.  Flash: Rebirth is expected to sell equally well, if not better, and is available today in comic book shops across the country.

News of Paco Ramone’s return to the DC Universe was initially reported in the New York Daily News, but his “return” was seen by many fans as probably being temporary. But this announcement yesterday indicates comic book readers better get used to seeing Vibe around, and the two guys who revived Green Lantern and Flash will be the ones bringing him back for good.

Now that this announcement confirms Paco is back as Vibe, the fate of Armando Ramone is unknown.  Armando, one of Vibe’s younger brothers, developed a similar set of vibration-based powers after Paco’s death.  Armando joined Booster Gold’s team of heroes, the Conglomerate, using the code names Reverb and later Hardline.  Armando carried on the family tradition of shaking things up and proudly wearing the black and yellow that Vibe made so famous.

Newsarama spoke to Johns and Van Sciver to find out more about the series, why Paco Ramone will redefine the DC Universe, what will happen to Armando, and what this means for the future of other deceased Justice Leaguers. 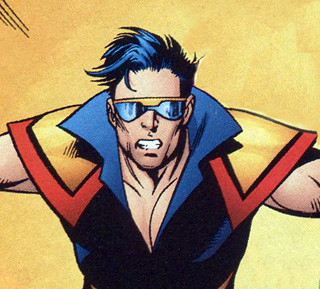 NRAMA: The worlds are so different, though, aren’t they?

GJ: They are vastly different, but we want to turn Vibe into a pillar of the DC Universe, just like Green Lantern has become a pillar. Our goal is to elevate the Vibe Universe.

EVS: He’s entitled to that.

GJ: Yeah. He deserves it. He’s one of DC’s great untapped characters.  He was the first Justice Leaguer to be killed in the line of duty.  He was only around for few years and didn’t really get a chance to explore his full potential.

GJ: Paco’s the central character. I don’t want to say much more than that.

EVS: Are we being very careful here?

GJ: We’re being very careful. We don’t want to give anything away.

NRAMA: OK, it’s centered around Paco, but what about Armando?

EVS: It’s centered around Paco, but we touch on all the other vibration-based characters as well. We’re not just talking about Armando, but also folks like Black Canary and the Fiddler.

GJ: Just like Green Lantern: Rebirth touched on all the GLs.

NRAMA: Oh, now that’s going to get people talking. But will other Vibe-related characters be in this book, like Mother Windom, or the rest of Vibe’s family?

GJ: We’ll be delving into everything we can.

EVS: Nothing will be ignored, really.

GJ: This is literally taking, like, every vibration-powered character, looking at it and saying, OK, what’s the next level we can take this stuff to?

EVS: Right. How does this all work together?

GJ: And where is it going to go? ‘Cause Vibe has always been about shaking things up.  And we’re going to register an 11 on the Richter scale. Just like Green Lantern.

NRAMA: Why is Paco more relevant now than he was back then? 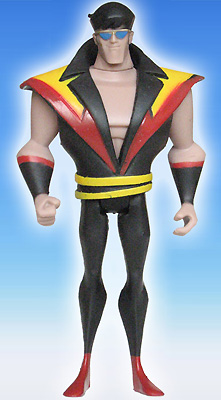 The Vibe action figure that came out late last year was one of the most anticipated figures in years. After seeing the fan support for the character, both as a figure and the cameos in the Justice League Unlimited cartoon, we knew now was the time to bring him back.

The other cool thing is that he has been gone for so long. ‘Cause he’s never met Tim Drake, and he’s never seen these other things. There’s so much that has happened in the DCU that he hasn’t seen.

To me, Paco led the way in the Bronze Age. But now that he’s been gone, bringing him into the DC Universe is going to make everything very different from anything we’ve seen for a very, very long time.

NRAMA: So is this Rebirth more about the story of Paco than it is an actual “rebirth?”

NRAMA: Ethan, with Green Lantern: Rebirth, you added a lot of elements to the Green Lantern look that are now incorporated into all the GL books. Are we going to see something similar with Vibe?

EVS: For me, as an artist, this presents so many interesting visual opportunities. Both Green Lantern and Vibe are energy-based and visually exciting and appealing. They both do cool things and it’s just an opportunity to draw cool effects.

I think there are some easy ways that artists can use to show vibration powers. And I want to toss all of those out and come up with some brand new ways to show, with a still picture, a human being shaking things apart. It’s incredibly, incredibly exciting.

NRAMA: Will some of Vibe’s old foes be in Vibe: Rebirth? Characters such as Overmaster, Crowbar, Despero, and Professor Ivo?

GJ: If you look at the DC Universe, there are a tremendous amount of dead characters just waiting for someone to breathe new life into.

EVS: We have plans.

GJ: But for now, Vibe is going to be a major focus for me.

EVS: Vibe is so important to both of us. Right now, at this point, Geoff and I have the right energy and it’s the right time to take a new look at the Vibe mythos and build it back up again.