Tom Baker Returns to Doctor Who after 28 Years! 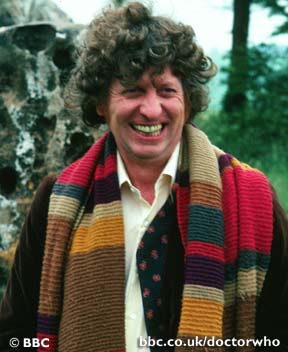 After nearly 30 years away from the part, Tom Baker is returning to Doctor Who!  Baker has recorded five audio dramas that will be released by the BBC starting in September at a rate of one a month.  While I’m sure we’d all love to see Baker on the new television series, audio is really the more logical choice given Tom’s age and health. Tom Baker’s Doctor will be joined by former Who cast member Richard Franklin reprising his role as Mike Yates.

Here are the descriptions of each CD:

Doctor Who: Hornets’ Nest – The Stuff of Nightmares
‘Wanted: retired army Captain for light household duties and fireside companionship. Must tolerate mild eccentricity and strong scientific advice. Knowledge of Giant Maggots, Super Intelligent Spiders and Prehistoric Monsters a positive boon.’ Responding to an advert apparently worded for him alone, Captain Mike Yates (retired) is reunited with a ghost from the past. But why has the Doctor, that mysterious traveller in Time and Space, sent for his former UNIT acquaintance? Trapped by a horde of vicious creatures in an apparently innocuous English country cottage, the two old friends are on the brink of an enormous adventure. As the Doctor relates his recent escapades, it becomes clear to Mike that they – and the Earth at large – are facing an enemy of unimaginable power and horrific intent. The nightmare is only just beginning… With Tom Baker as the Doctor, Richard Franklin as Mike Yates, Susan Jameson as Mrs Wibbsey and Daniel Hill as Percy Noggins, The Stuff of Nightmares is the first of five linked stories written by the acclaimed Paul Magrs.
Release Date: September 3, 2009

Doctor Who: Hornets’ Nest – The Dead Shoes
What is so special about a pair of ballet shoes on display in Cromer’s Palace of Curios? When the Doctor meets Ernestina Scott there in 1932, they discover the horrific truth together. The second of five linked stories written by the acclaimed Paul Magrs, The Dead Shoes also features Susan Jameson, Clare Corbett and Christian Rodska.
Release Date:  October 8, 2009

Doctor Who: Hornets’ Nest – The Circus of Doom
In Blandford, 1832, ringmaster Antonio exerts a strange influence on the townsfolk. When the Doctor steps into the ring, he discovers that Antonio has some familiar demons of his own… The third of five linked stories written by the acclaimed Paul Magrs, The Circus of Doom also features Michael Maloney, Jilly Bond, Susie Riddell and Stephen Thorne.
Release Date: November 5, 2009

Doctor Who: Hornets’ Nest – A Sting in the Tale
In a bleak midwinter, an order of nuns protect their Mother Superior from ravaging dogs. But something is very wrong here indeed – and the Doctor is about to get badly stung. The fourth of five linked stories written by the acclaimed Paul Magrs, A Sting in the Tale also features Clare Corbett, Susie Riddell and Rula Lenska.
Release Date: December 3, 2009

Doctor Who: Hornets’ Nest – Hive of Horror
The Doctor and Mike must face their enemy in a final battle. They have an unwilling accomplice – and loyalties are about to be tested to the limit. The fifth of five linked stories written by the acclaimed Paul Magrs, Hive of Horror also features Susan Jameson and Rula Lenska
Release Date: December 3, 2009

Click here to read an interview with Paul Magrs over at Outpost Skaro where he covers writing the scripts and meeting Tom Baker. Paul Magrs has written several Doctor Who novels and audio dramas, and was a great choice as the author of these stories.  Magrs adventures tend to be large in scope and feature fantastical elements – very Tom Baker-esque stories.

A few online retailers are already taking pre-orders on these CDs.  For those of you here in the United States, I recommend Who North America for all your Doctor Who needs.  I’m not sure if they are taking pre-orders yet, but they have the best customer service of any online retailer hands-down.  You can visit their site by clicking here.  If you can’t find something you are looking for, drop them an e-mail.  They are very accommodating.

Strangely enough, there hasn’t been much press around Tom Baker’s return to Doctor Who.  Given his long-lasting popularity, you’d think there would have been more news already.  I suppose there will be more publicity as they get closer to the September release date.

On a personal note, I’m really psyched about this!  I can’t believe that after all these years Tom Baker has finally agreed to return to the part.  I can’t wait!

18 thoughts on “Tom Baker Returns to Doctor Who after 28 Years!”