I owe Geoff Johns and Ethan Van Sciver an apology…

I’ve been ranting and raving about Barry Allen coming back as the Flash for over a year now.  That’s not why I owe them an apology.  I’m still pissed about that.

I owe Geoff Johns and Ethan Van Sciver an apology for doubting them in regard to Wally West.  I was fairly confident that Wally was going to get shafted as a result of Barry’s return.  We knew a costume change was coming for Wally, that was frightening enough by itself.  Then there were rumors that Wally would adopt a new superhero name, like Mercury or something similar.  Given that Wally is one of my all time favorite characters, I was understandably unhappy with these possibilities.

Turns out I should have trusted Geoff and Ethan.  They did a great job with Wally.  Not only did Wally continue to keep the “Flash” name, but his redesigned costume provides him with his own distinct look and honors the costumes he’s worn previously.  Below is a shot of Barry and Wally side-by-side. 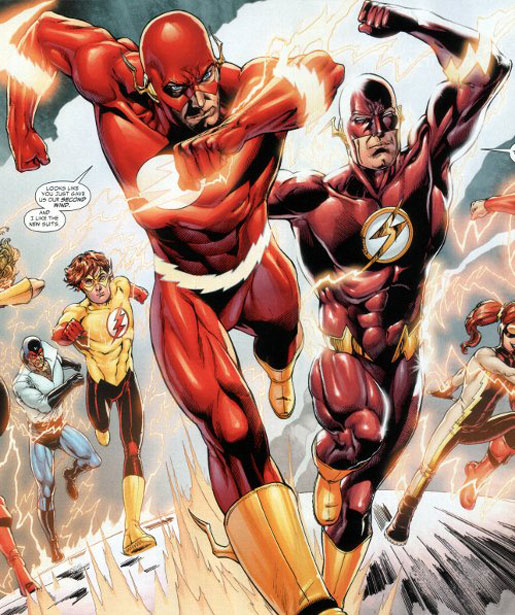 You can see the differences right away.  What you may not realize is that all of the new elements of Wally’s costume come from previous costumes he’s worn.  Below is a quick breakdown of the differences in Wally’s new costume.  I don’t claim credit for this list, it comes from the brilliant Kelson over at Speed Force.org.  Check out his site for a thorough comparison between Barry’s costume, Wally’s new costume, and all of Wally’s previous costumes.

There is also a great line in Blackest Night #5 reinforcing Wally as his own man, and not just a shadow of Barry:

What a great line!