My Daughter and the Invasion of the Toys

I have a four-year-old daughter.  Let’s call her the Precocious Princess for discussion purposes here.  As many children do, she idolizes her older brother (he’s 10).  She sees him playing with superhero and sci-fi action figures and emulates his behavior.  Recognizing that, I’ve been trying to buy her girl-centric superhero toys.  If she’s going to play with superheroes, I want her to understand that girls can kick butt and save the world also.  I’ve been buying her toys of Wonder Woman, Supergirl, Wonder Girl, Hawkgirl, etc.  There is not a bunch out there, but I’m doing my best to get them in her hands.

She was playing in my home office the other day while I was straightening the house.  I came in to check on her, and these were the toys I found her playing with… 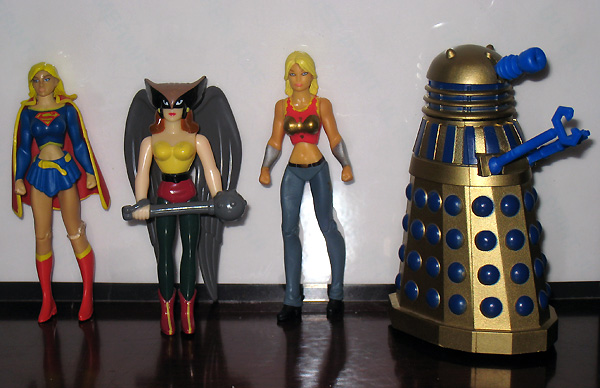 Not exactly the particular combination of characters I was expecting to find!  The heroines on the left are hers and she’d somehow managed to get hold of this 15-year-old Dalek toy I had lying around.  When I walked in the Dalek was in a very animated discussion with the heroines shouting “Exterminate”.  I’m not sure she knows what that means, but she certainly knew the catch phrase.

I guess she’s trying to be like her brother and her daddy.  Makes me proud.  It also demonstrates kid’s natural interest in the Daleks (a phenomenon dating back to 1963).

To hear my four-year-old daughter doing her best Dalek impersonation, play the audio file below.

If you’re unable to play the file above, you may download it by right-clicking here (17 KB).

13 thoughts on “My Daughter and the Invasion of the Toys”