What a great Father’s Day I had!  My wife made chocolate chip muffins for breakfast, I spent the morning playing with the kids, then we all swam in pool for the first time this season, next I got to eat Sonny’s barbeque for lunch, and finally we went to the comic book shop!  What a fun stress-free day! 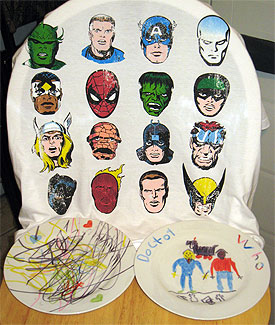 In addition to some nice typical Father’s Day items, I gotta mention the geek-related swag I received.  I got a cool Marvel t-shirt from Target that I’ve been eyeing lately (see picture to right).  Then I also received two plates that my kids drew for me! You can see the plate on the left was done by two-year old daughter.  She’s currently in her Impressionist period.  Don’t worry, we’re watching her closely to ensure she doesn’t cut off her ear and give it to anyone.  The plate on the right was done by my eight year old step-son.  You can see he’s done a Doctor Who themed plate for me.  This may just be my favorite piece of Doctor Who related merchandise now!  You can clearly make out the 10th Doctor, Martha Jones, K-9, and the remains of a recently-destroyed Dalek!  He got all the colors right, and even drew in the Sonic Screwdriver.  I’m so proud of my budding little geek! 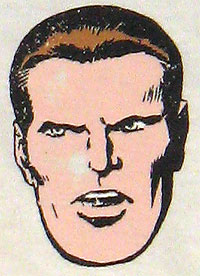 In regard to the shirt, I love the 1960’s/1970’s era Marvel apparel.  The fake fading makes them look even cooler! However, I gotta ask you (my geek buddies) to help me identify one of the faces on my new shirt.  I recognize everyone except this guy.  Who the funk is he?  He’s not Reed Richards and he’s not Nick Fury.  I’m clueless.  A little help here?