I bought a new comic book t-shirt this weekend at Kohls and it got me thinking about what to wear to Dragon*Con.  I looked through my closet and was amazed at how many comic book t-shirts I had amassed.  I mean seriously, these things pile up.  Back when I managed a comic book store, you could consider  these to be work clothes.  Nowadays, I don’t get many chances to wear these t-shirts.  So I decided they needed to see the light of day one way or another.  Therefore, today and tomorrow you get to stroll through my wardrobe.

Over the past 15 years, I have gotten so many t-shirts that I’ve split them across two days.  Today I’ll be showing off my new shirt, Marvel comics shirts, Scud the Disposable Assassin shirts, and Astro City t-shirt.  Some designs were purchased pre-faded (or pre-stressed).  Unless specifically mentioned, assume any fading occurred naturally with these shirts.

To see the other comic book t-shirts I’ve previously displayed here at ONCE UPON A GEEK, please click here and then scroll down. 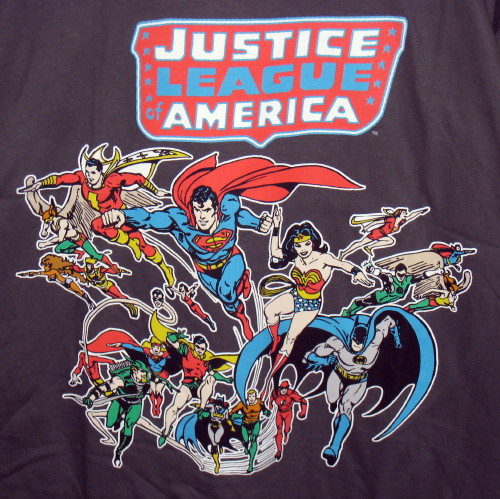 Here is my new shirt!  The image is of the late-Bronze Age Justice League of America (with a few extras thrown in for good measure).  I love the strong white outline on each character; it’s really sharp.  Also, it’s nice to have Aquaman, Flash, and Firestorm all on one shirt!  This is  the second officially-licensed shirt I’m aware of that features Firestorm. Poor Matchhead, he doesn’t get much play. 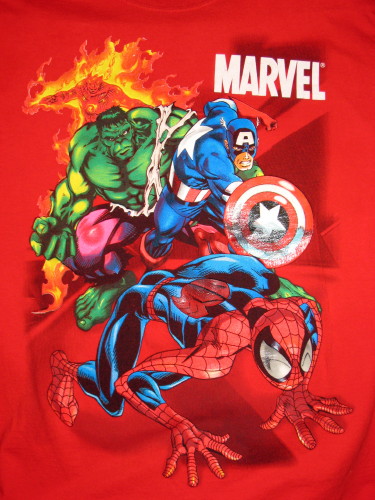 Pre-faded Marvel t-shirt from Target bought by my wife and kids within the past year or so.  The faces are very reminiscent of the 1980s corner box images. 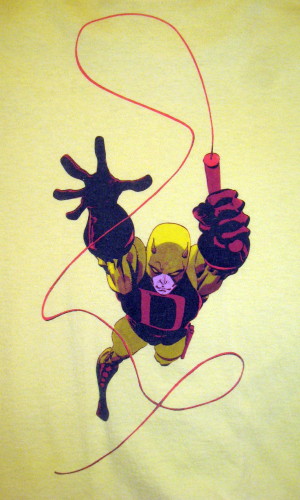 “Daredevil Yellow” t-shirt by Tim Sale.  I bought this shortly after the series because I’ve always loved Daredevil’s original costume. 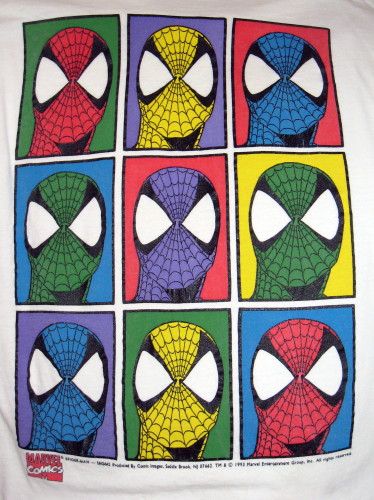 Andy Warhol-style Spider-Man shirt.  I believe this is Mark Bagley art from his original run on Amazing Spider-Man.  I wore the heck out of this shirt in the mid-1990s. 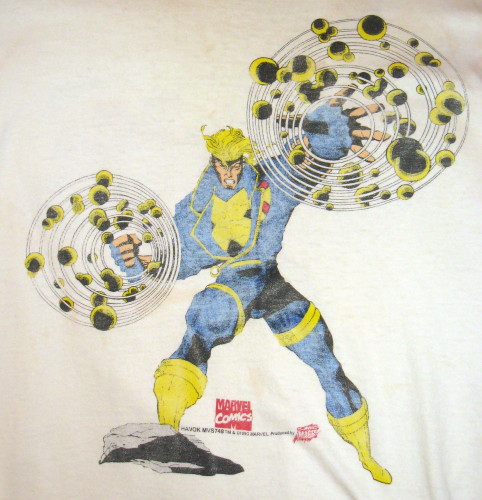 Havok from X-Factor drawn by Joe Quesada.  I bought this shirt around the time he was drawing X-Factor, long before his tenure as Editor-in-Chief of Marvel Comics.  The faded design on this shirt is genuine.  Because I enjoyed Peter David’s run on X-Factor so much, I wore this shirt all the time.  Once it started to fade, it became a frequent nightshirt. 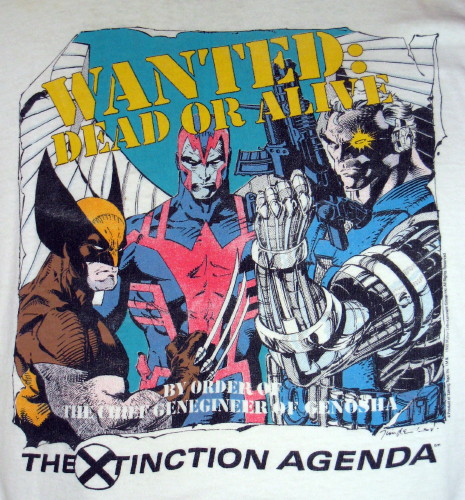 Jim Lee Xtinction Agenda shirt.  Got this for my birthday around the time this story was published. 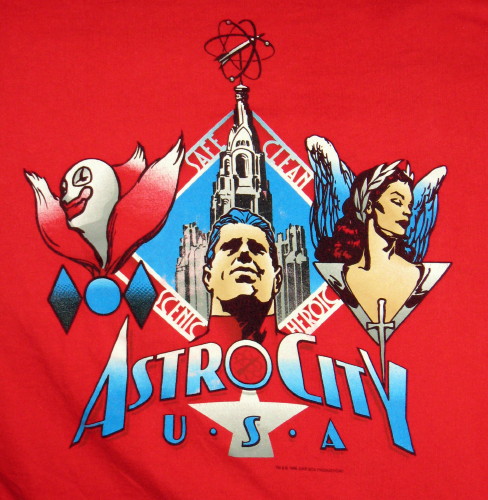 Astro City shirt I bought in Colorado on vacation a few years ago. 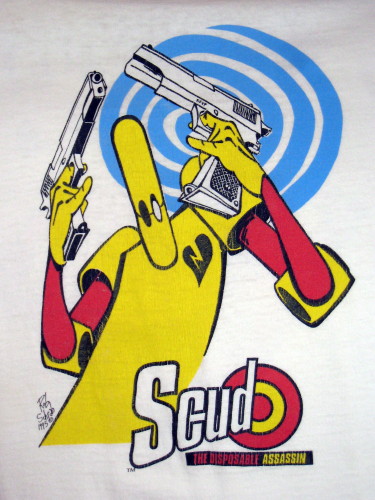 Fantastic Scud t-shirt I bought back in the 1990’s (when Scud was being published the first time around).  Back then you didn’t have internet shopping; you had to order shirts like this via the mail from an ad in the back of the comic book. 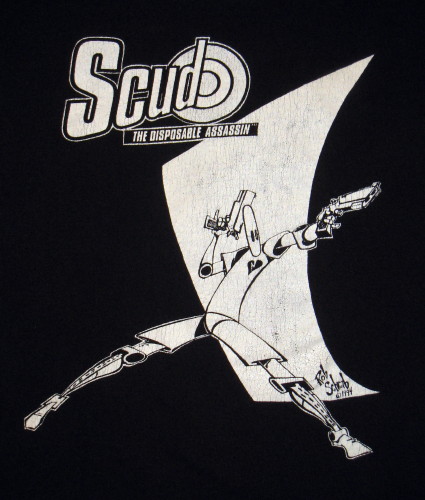 Another Scud t-shirt I bought back in the 1990’s.  The stress on this shirt is genuine.  I did everything I could to get people to read Scud, even promoted it on my own body. 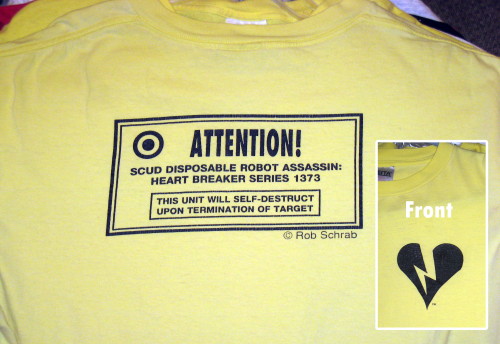 Another Scud t-shirt.  The primary image above is the back of the shirt, with the insert being the front left-hand side.  This shirt was designed to look similar to the body of the Scud robot.  The only downside to this shirt was that it was bright yellow.  It takes a brave man to wear a bright yellow shirt. 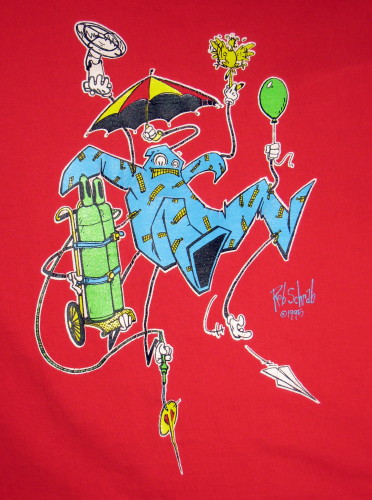 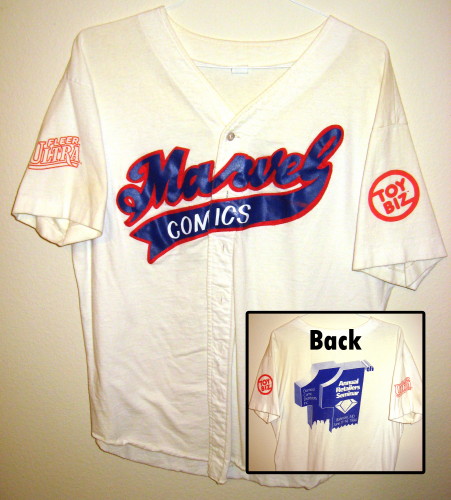 This is a fairly unusual one.  I got this for attending Diamond Comics 11th Annual Retailers Seminar.  It was held in Baltimore in 1994.  Diamond Comics distributes the majority of comic books in the United States.  That particular year they took us to a Baltimore Orioles game; thus the baseball jerseys.  Very cool! 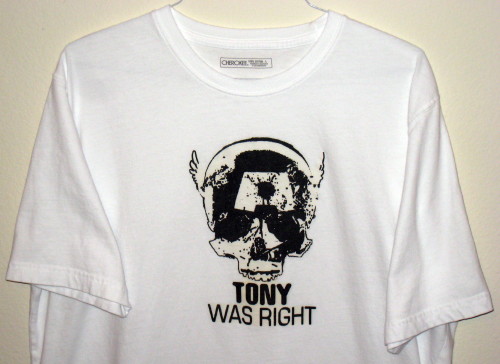 As promised in a previous blog entry, here is my “Tony Was Right” t-shirt!  I can’t wait to wear this to Dragon*Con!

There were a few other comic book t-shirts I owned previously that I’ve gotten rid of over the years.  A few that spring to mind:

Hope you’ve enjoyed this installment of “Shag’s Closet”.  Come back tomorrow for the DC shirts…