I picked up my copy of the Iron Man DVD on Tuesday from Target.  If you haven’t seen the packaging yet for the “Ultimate 2-Disk Edition” from Target, it’s SWEET!  There are several different retailer exclusives, but I personally like the Target version best.   The DVD package itself is shaped like Iron Man’s head!  How cool is that?!?!?  See the pictures below. 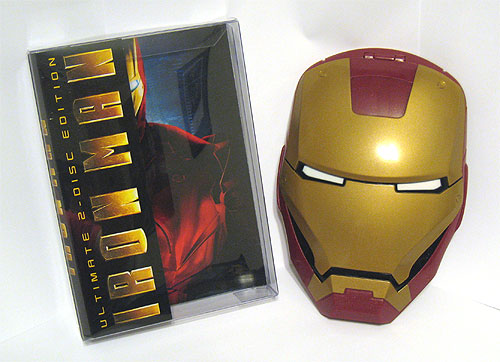 Other retailer exclusives include comic books, access to exclusive digital comics, bobbleheads, a DVD featuring the first episode of the new animated series, and more.  You can find a complete list of the exclusives at SuperHeroHype.com.  Special features included with the “Ultimate 2-Disk Edition” include: deleted and extended scenes, a “Making of” documentary, a “History of the Hero” feature, a segment on visual effects, Robert Downey Jr’s screen test, the actor’s process, still galleries, and more.

When I sat down to watch the movie again, I was worried I wouldn’t enjoy it as much.  I was completely over the moon for the film when it was first released.  On occasion in the past I’ve really enjoyed a geek-related movie, only to find myself suffering from a “geek hangover” upon second viewing.  That was not the case this time!  This movie still rocks!  It starts with a bang (literally in Afghanistan) and keeps a hold of you all the way until the end.  Jon Favreau directed a comic book masterpiece here.  This is definitely my favorite comic book movie yet!  Robert Downey Jr really is the perfect Tony Stark; suave, focused, handsome, and can really act the rich playboy.  I also really like Gwyneth Paltrow as Pepper.  She’s not exactly like Pepper from the comics, but she did a fine job as Tony’s girl Friday.  It doesn’t hurt that she looked really hot in this film.  While I wasn’t thrilled with Terrance Howard as Rhodey the first time I watched the movie, he’s growing on me.  I can’t wait to see him as War Machine!  And Jeff Bridges as Obadiah Stane… just wow!  Who would have guessed he could pull off such a menacing villain (and bald too!).

Two minor characters worth mentioning are Agent Phil Coulson of SHIELD and Happy Hogan (Jon Favreau).  I really liked the unassuming character of Agent Coulson.  Once he got his chance to shine it was great.  On top of directing an outstanding movie, Favreau was also fun to see as Hogan.  In Daredevil he played “Foggy”, in Iron Man he played “Happy”.  Sounds like he’s collecting his own seven dwarfs cast of roles.  🙂

The special effects in this movie were completely seamless!  It was very difficult to tell what was CGI and what was costume.  I’ve also been negligent in complimenting the script.  What a well put together story with lots of action, drama, and humor!  If the script had been lousy, these great actors and fantastic special effects wouldn’t have been able to save it.  I hope they get the same script writers back for Iron Man 2!  I’m looking forward to the “Demon in a Bottle” storyline.  Finally, check out the deleted scenes on the DVD… there is more on the Stark Industries airplane with the sexy stewardesses!

To sum up, “Iron Man” truly is an invincible movie! 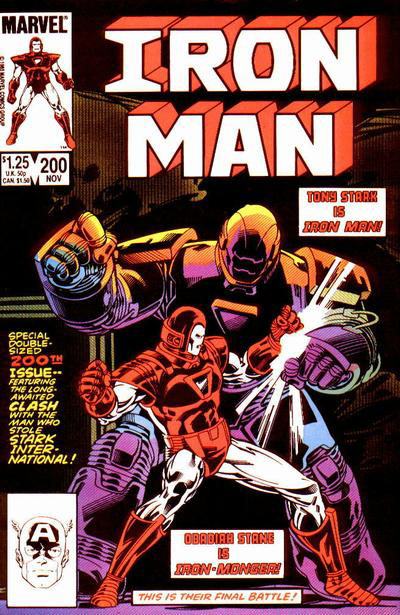