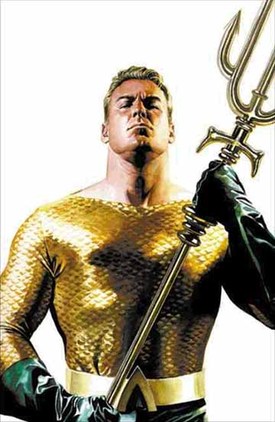 AQUAMAN WEEK continues here at Once Upon a Geek!

Aquaman takes a lot of heat from comic book fans and comedians alike.  With his particular powers and the general public’s awareness of him, he makes an easy target.  However, he really deserves more respect than he gets.

Many people don’t realize this, but Aquaman is one of the few superheroes that continued to be published in the late-1940s/early-1950s (the era between the Golden Age and the Silver Age) while most other superhero characters disappeared into obscurity.  In the mid- to late-1940s, superhero comic books were losing popularity while the comic industry as a whole was expanding.  Comic book publishers were dropping superhero books faster than you could imagine.  These comic books were replaced with more popular tales such as westerns, romances, crime dramas, war stories, horror, science fiction, humor, and the like.  Only a small handful of superhero comics continued to be published during this era.  Those from DC include Superman, Batman, and Wonder Woman; with back-up features starring Aquaman, Green Arrow, Johnny Quick, and Robotman.  With the multitude of characters created in the early-1940s, obviously Aquaman had a strong appeal with the readers to make it through those lean years.  It’s really surprising to think he outlived characters such as Green Lantern and Flash.

Another little known fact is that Aquaman was the second DC character to be animated way back in 1967. Lots of people know he had a cartoon, but many don’t realize that he beat Batman to animation by a year.  Aquaman started off as one-half of The Superman-Aquaman Hour, but his segments were spun off into their own show the next year.  Not to shabby for a guy who can talk to fish.

Show some respect and laugh a little…

Here are a few Aquaman-related bits that I enjoy.  The first was put together by an Aquaman fan as a response to all the flak he takes.

This has been making its way around the internet for a couple years, but first appeared at “McSweeney’s Internet Tendency“.

AQUAMAN,
KING OF THE SEVEN SEAS,
HAS FUCKING HAD IT
WITH YOU, MAN.
BY GLEN WELDON

It’s not like I’m all, Hey, Peter Pufferfish, what’s up? and he’s all, Yo, nothing much, brah.

It doesn’t work like that, all right? I mean, most of them don’t even have brains, for one thing. They have maybe a bump at one end of their spinal cord, a pimply little swelling of ganglia, if they’re lucky.

Language is not a looming issue, is what I’m saying.

No, how it works is: I command them. Period, the end. Command, as in bend them to, you know, my will and whatnot. Fuckin’ A.

Even the ones with actual for-real brains, the cetaceans. If I want, you know, a pod of Burmeister’s porpoise to ram the hell out of Black Manta’s Manta Sub, that shit gets done. If I totally want, like, a southern minke whale to go hump a giant squid (its most hated enemy, by the way), I just go doodoodoodoodoodoo and it’s like Show World down there. Not that I would, because, you know, gross, but I’m just saying: I don’t ask. I’m not going to be all, If you wouldn’t mind terribly much, please, Mr. Southern Minke Whale, go get your nasty freak on with that giant squid.

And it’s not training. I read that on some blog: “He just trains them to do all that.”

Dude, I can get 6 million krill to gunk up the engine of a getaway ship by having them hurl themselves up the intake jets. Mass sea-monkey suicide. OK? Try that shit with operant conditioning, with some big-titted blondie waggling a smelt, see what you get. Think they’re meting out kick-ass sea justice over at Epcot? Shyeah.

It’s all good. Somehow I manage to suffer through it. I soldier bravely the fuck on, comforted only by the small but telling fact that I’m absolute goddamn ruler of-what was it again?-oh, yeah: the EARTH.

And you, you’re, like, star of open-mike night at the Mirth Shack in Jacksonville. And your MySpace blog? OMG! ROTFLMAO!

You used to be cool, man.

When you were a kid, you’d sit at the bottom of the Stupaks’ pool, remember? Used to sit there and pretend the kickboard between your knees was Storm the Giant Seahorse, and you’d stay under for as long as you could, going doodoodoodoodoodoo.

Remember there was that orange T-shirt you had? Remember that? That was cool.

But, you know, I get it. Whatever, that was a long time ago. Now you’re all, Wonder Woman never even let him fly her plaaaane, and whatnot. And that’s, you know, fine.

I could command you. You, those Robot Chicken assholes, alla y’all. Command you all to, you know, quit it.

I don’t make, like, a big deal about that, but I could. You’re just a fish at heart, dude. Down deep in your forebrain. I fuckin’ could.

No, it’s fine. You rock on with your bad self, dude. Mazel tov.

Seriously, though, leave my lady out of it. That’s not cool, man. Mera, she doesn’t get it like I do. She’s sensitive. I start hearing you talking shit about her, or her hard-water powers, or that time she turned evil, and I will fuck your shit up. Count on it.

This next one is a song called, “Arthur Curry”, by a band named Ookla The Mok.  They are a fantastic “geek rock” band that does bits about comic books, Star Trek, and lots of other geek-related interests.  Be sure to check them out and buy their stuff!

This particular song pokes fun at Aquaman while celebrating him at the same time.  Below you’ll find a fan-created video of the song followed by the lyrics.

VOICEOVER: Seconds later, at the Hall of Justice…

Batman’s got an attitude, everybody takes him seriously
And Superman never made any money, well try to tell that to DC
All the other members of the Justice League
Say I have useless super powers and make fun of me
But I know there will come a day
When they’re gonna stare in slack-jawed wonder as they hear me say

CHORUS:
I am Aquaman and nobody better mess with me
I may be nothing to you but I am a king beneath the sea
Let’s see you get by underwater as well as I do on the ground
I am Aquaman and you better not mess around

Batman’s got the Batmobile, Diana’s got her invisible jet
It seems like everybody else can fly, even Samurai
but a stupid seahorse is all I get
Green Arrow’s sharp but I couldn’t be any duller
My orange costume’s uglier than any other color
I’m not as tough as Batman or as cute as Gleek
I’m a little taller than the Atom but smaller than Apache Chief

Wonder Woman, all the world is waiting for you
And the magic that you do.
You can make a hawk a dove, You can end a war with love,
You can make a liar tell the truth.

Batman signed a movie deal though you know he doesn’t need the cash
And all the second-rate superheroes get TV shows
even the pre-Crisis Flash
But not me, I guess that I don’t rate
My comic book’s been canceled more than Dr. Fate
I know that I’m no Brainiac but I’m no fool
I know not even Peter David can make me cool

And finally, a quote from Aquaman himself that demonstrates another reason why he is a force to be reckoned with.  When his kingdom faced the threat of invasion, Arthur – King of Atlantis – had this to say in Aquaman #75:

Green Lantern has a Power Ring.  Superman has a cape.  Batman has an attitude and a fancy car.  Me?  I have an ARMY.  And I intend to use it.

Come back tomorrow for more Aquaman action!  And as I mentioned before, be sure to check out THE AQUAMAN SHRINE – the best Aquaman site on the net!  And Rob has been kind enough to post some of my Aquaman memorabilia on his site.  What a nice guy!

One thought on “Aquaman: Respect the King”