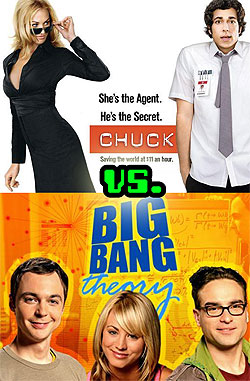 Well the people have voted, 115 people to be exact.   I wanted a good cross-section of fans, so I promoted the poll through several sites (reddit, Digg, delicious, the Unique Gee listserv, the ChuckTV forums, and the CBS Big Bang Theory forum).  According to the people who took this poll, my theory was incorrect.  While many people like one or the other as I theorized, there were a number of people that liked both shows (21% to be exact).

Which TV show do you prefer, ‘Chuck’ or ‘Big Bang Theory’?

If nothing else, the results showed that of the people that voted, more people like ‘Chuck’ than ‘Big Bang Theory’.  Since I’m more of a ‘Chuck’ fan, I guess that’s something.

My thanks to everyone that participated in the poll.  Be sure to vote in the new poll on Star Trek!