Thanks to everyone that stopped by during AQUAMAN WEEK here at Once Upon a Geek.  Based upon comments and number of hits, it seemed to be of interest to lots of folks.  I’m glad to hear that.

Today is an addendum to AQUAMAN WEEK.  Below you will find a picture of my Aquaman figures.   I don’t buy every Aquaman figure that comes out, but I do have quite a few of them.  My collection includes the original Mego Aquaman, the Super Powers Aquaman, Total Justice/JLA Aquaman figures, some HeroClix, a JLA PVC of Aquaman, DC Direct figures, a Mattel DC Universe Classics Aquaman, a Super Friends Aquaman, a custom figure built by a  friend, and many more.  Click the picture to enlarge the image. 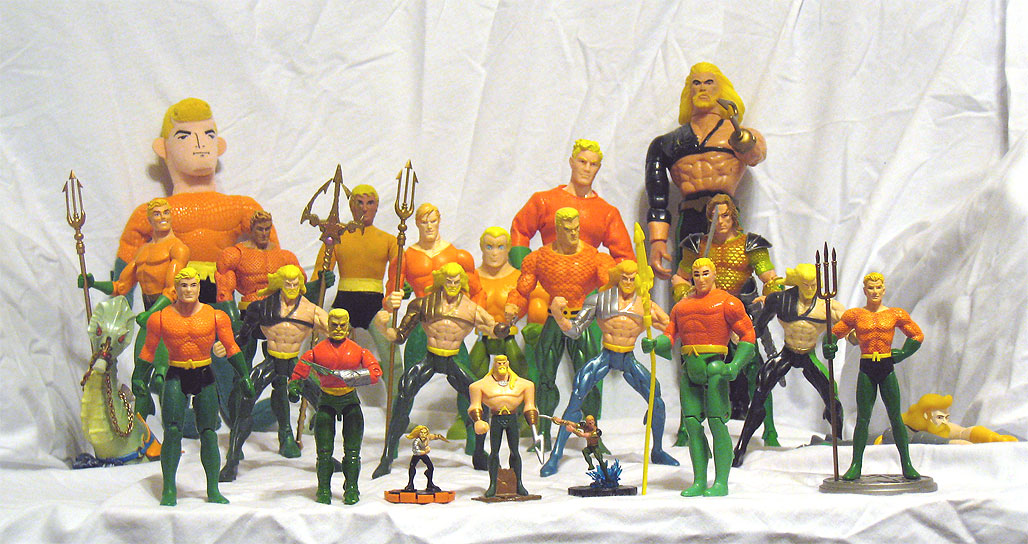 Kind of a funny story… Shortly after Aquaman lost his hand and replaced it with a hook in the comics, a friend and I were discussing DC action figures.  The idea of an Aquaman action figure with a hook came up.  I was convinced that DC would never produce such a figure, and yet I wanted one really badly.  I figured DC wouldn’t make a hooked Aquaman action figure for two reasons: (1) Aquaman wasn’t very popular, so why make an action figure at all; and (2) the concept of piranha eating your hand and then replacing it with a sharp hook seemed a little out there for a kids toy.

So I guess I was crazy for sticking to my word and buying all these figures.  However, I was smart and waited until the toyline was dying and they were on clearance.  I may be a man of my word, but I’m not a fool with my money.  🙂