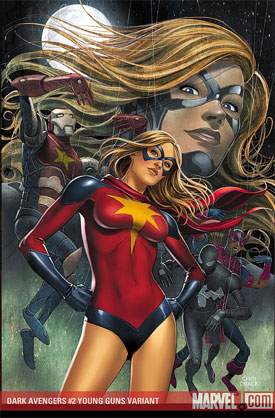 In case you hadn’t noticed, the price of your monthly comics has been creeping up.  For the past few years, monthly comics from Marvel & DC have cost $2.99 each.  Rumors have been floating around about a price increase on the horizon.  Well, Marvel is starting to move up.  For example, both New Avengers and Dark Avengers are already priced at $3.99 with no additional pages added.  Most of Marvel’s new limited series are also priced at $3.99.  Both companies have been using the $3.99 price for a while on extra-sized comics (usually with an additional 8-pages), but the 22-page comics had remained $2.99 until now.  It’s worth noting that only Marvel has announced the price increase on 22-page comics at this time.  But don’t be fooled, both companies tend to match prices. I’m sure it’s just a matter of time until DC catches up.

Just a couple quick thoughts about this price increase:

Just a quick history lesson on price increases.  Here are the past few price increases, showing how much of an increase and when they happened.  I used Uncanny X-Men cover dates for this example:

Some people have suggested that the “Big Two” should just drop the monthly comics and move to a trade paperback-only industry.  While that’s an interesting thought, neither of the “Big Two” is currently structured in such a way to support change like this.  From what I’ve heard, the monthly comics are paying the bills, while the trade industry is where the profit is.  As it stands right now, they can’t afford to pay their bills without the monthlies.