New Mutants #1 from Marvel Comics was released back on May 6.  It took me a while to get to this one as I’m behind in my reading, but it was definitely worth the wait. For me, this comic felt like Homecoming.  All my favorite New Mutants were there, but they had grown up.

A little history for you… I remember back when I was in Middle School a friend described to me their passion for the New Mutants.  He explained that while he loved reading about the X-Men, the New Mutants were people he wished he could hang out with.  At the time I wasn’t reading New Mutants on a regular basis, however, his description always stuck with me.  I started collecting the series when I was in High School with issue #71.  Within just a couple months, I had purchased all the back issues and was firmly enthralled in the mythos of the New Mutants.  I absolutely loved this team!  I agreed with my friend completely, these were kids that I would have loved to hang out with!  When everything changed a year later (with the introduction of Cable), I was still enjoying the book.  I thought the new direction with Cable had promise and I even liked Rob Liefeld’s art (when he was just starting out and was inked by an experienced artist).  I hung with X-Force for the first twenty issues, but eventually stopped when it became unreadable.  From there I lost track of my New Mutant friends.

Enter New Mutants #1 this month.  Cannonball, Sunspot, Magma, Magik, Karma, and Dani Moonstar together again!  It was interesting to see how the characters had changed over the years.  They weren’t dramatically different, but there were enough changes that you could tell time had passed.  This series isn’t ignoring their appearances since the final issue of the original New Mutants series, but it’s certainly minimizing those other stories.  I wasn’t kidding when I said this issue was like a Homecoming.  You got the sense that these characters haven’t worked together in a long time.  It reminded me of seeing old High School friends when I was in college.  Clearly we had grown apart and were now different people, but we quickly settled back into our old groove.

The original New Mutants are now all considered to be graduates and are recognized as members of a larger X-Men force.  In this issue, Cannonball assembles an X-Men team made up of former New Mutants to rescue Karma and Dani.  From what I’ve read in interviews, the heroes of this book won’t actually be called New Mutants.  There is an interesting scene of Cannonball requesting approval for his team roster from a very middle-management-like Cyclops.

My two all-time favorite New Mutants are Cannonball and Magik.  In this issue I liked seeing Cannonball grown up and comfortable with his role as an X-Men.  He’s no longer the lanky kid we remember; now he’s built like a college quarterback. He’s also confident without being too cocky.  Magik hasn’t actually changed much, primarily due to the fact that she’s been dead for a number of years and was only recently brought back.  Her dark side is still just beneath the surface, as was shown in a few different scenes in this book.  In fact, she was downright creepy in one conversation with Magma.  I’m glad they kept Magik’s classic haircut, it just makes her even more unsettling.

Magma had some interesting scenes involving a romantic subplot, while Sunspot was there mostly for comedy relief.  That’s not to say his character was useless, I just think there is a lot of room to further develop Sunspot.  We only saw Karma a little bit and haven’t seen Dani at all yet.

It’s a shame that Wolfsbane is being used over in X-Force; it would be nice to see her interact with her old friends.  Zeb Wells has hinted in interviews that we may see Warlock within the first year of the book —  hooray!  Hopefully no one is clamoring for a return of Bird-Brain.

I enjoyed Zeb Wells’ writing on the book.  There was a good pace, interesting character development and interaction, and Wells was able to cram a lot of story into 22 pages.  Diogenes Neves’ art was decent in the issue.  Not the most amazing artwork I’ve ever seen, but better than many other comics.  His Magik was dead-on.

If you are jonesing for more New Mutants, you can probably still find copies of the free New Mutants Saga that came out in April.  It recapped all 100 issues of the original New Mutants series – and it was FREE!  You might also want to try the Marvel Spotlight: New Mutants special that came out this month.  It featured interviews with current writer Zeb Wells, and original series creators writer Chris Claremont and Bob McLeod.  It was a good read.

I plan to continue collecting New Mutants and hope the quality stays as solid as the premiere.  Issue #2 is scheduled to ship June 3 and features the return of Legion (the insane son of Xavier and the one responsible for the Age of Apocalypse alternate time line).  I sincerely hope Marvel doesn’t ruin my enjoyment of this book by tying it too heavily into the million other X-titles on the market.

The image at the top of this post is one of the covers to New Mutants #1.  Below are three more. 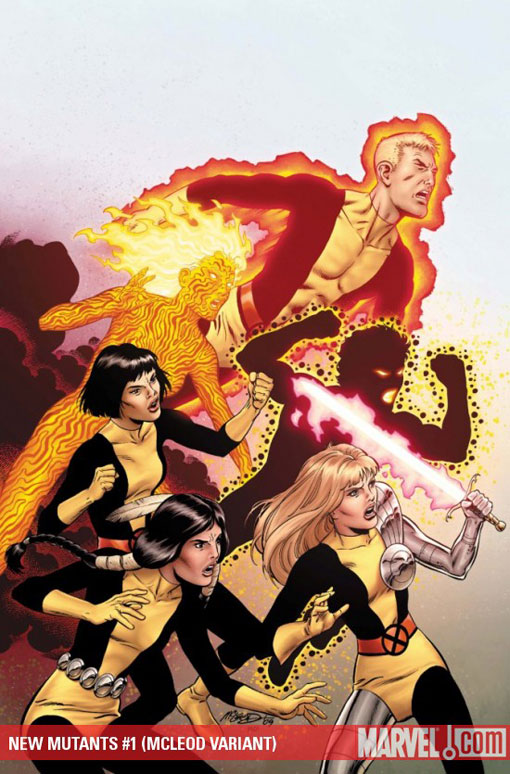 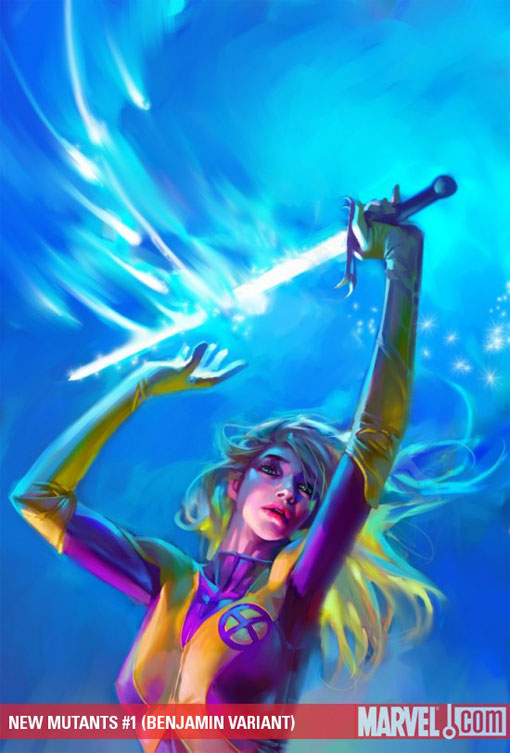 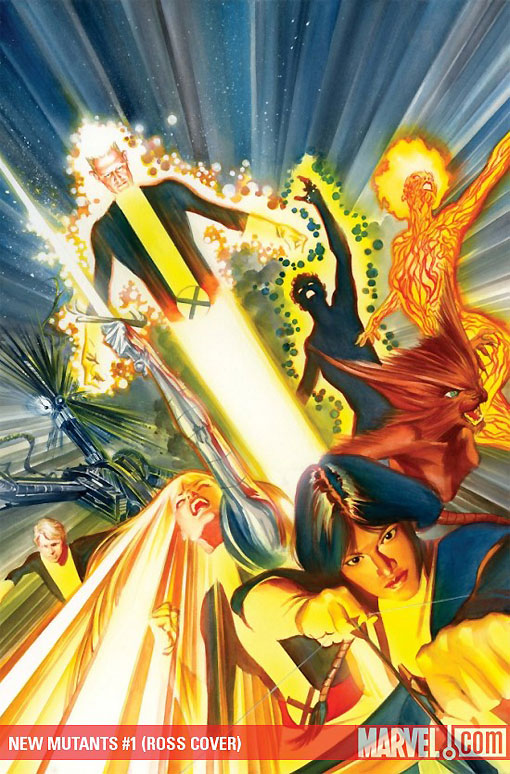 Just for fun, here is an awesome ad for the original New Mutants series (circa issue #18) drawn by Bill Sienkiewicz. 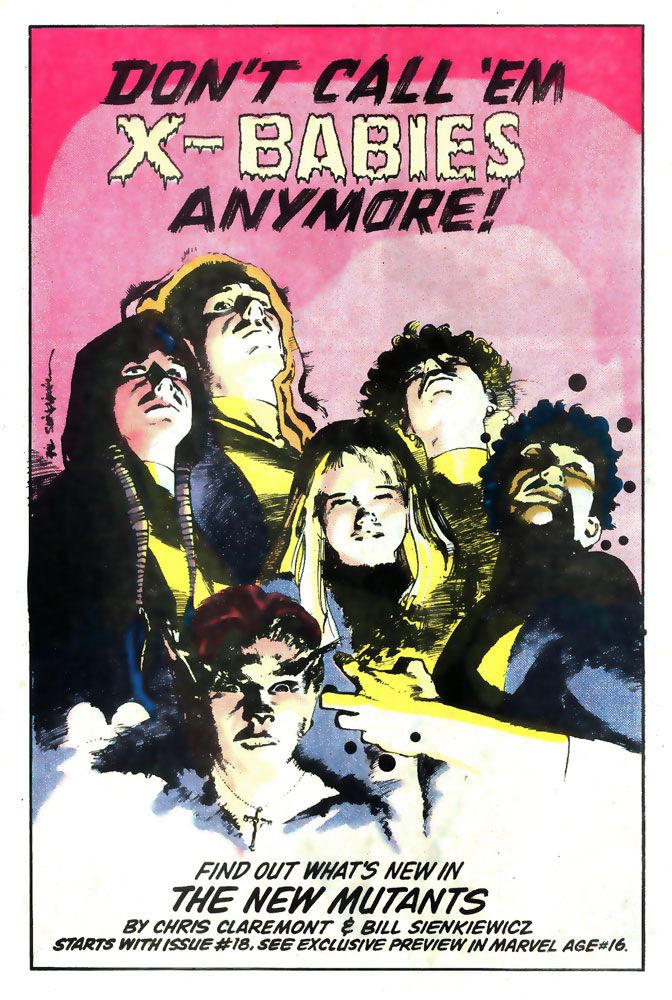 Finally, here are some drawings from my favorite New Mutants artist, Art Adams. 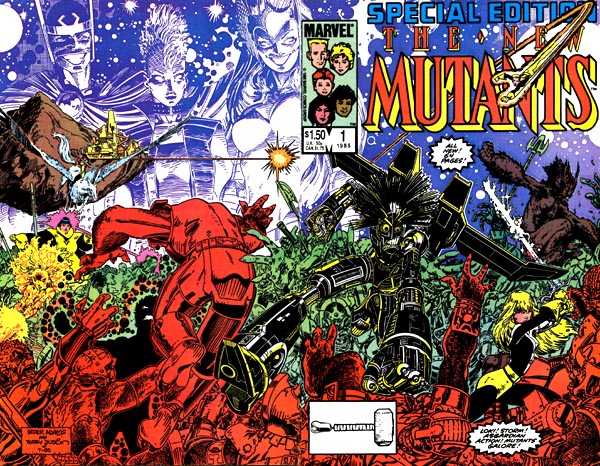 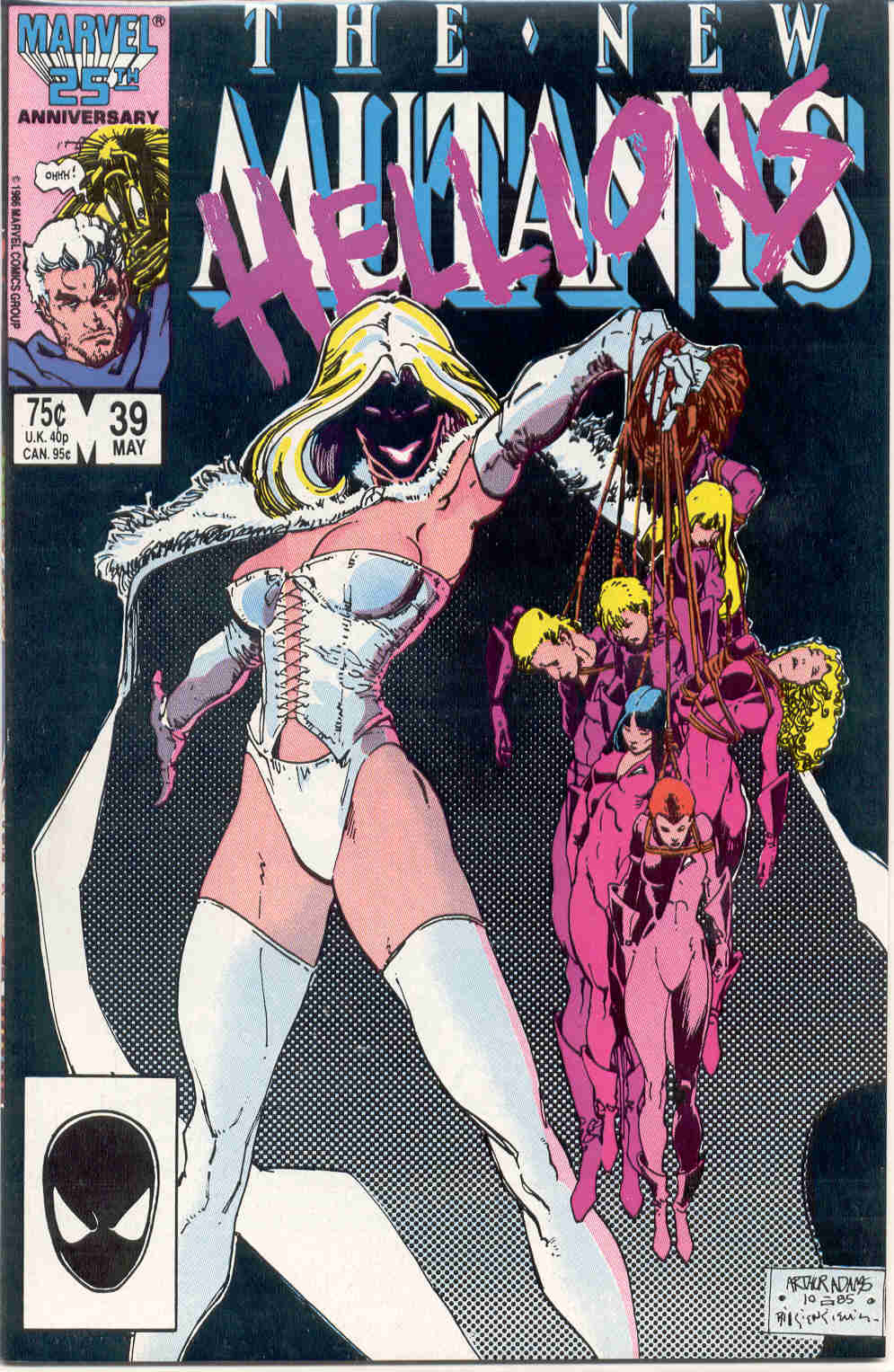