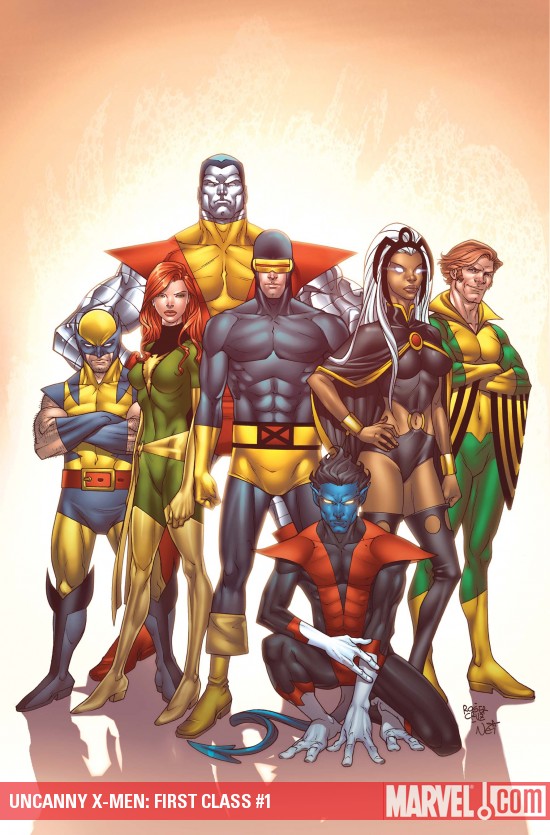 I picked up Uncanny X-Men: First Class #1 last week. This is a new ongoing series from Marvel set in the early days of the Uncanny X-Men.  I guess I’ve got X-Men on the brain.  I’ve mentioned it here before, I used to be a major X-junkie. We’re talking MAJOR junkie. I’d read every single Uncanny X-Men story from Giant-Sized X-Men #1 (1975) through Uncanny X-Men #320 (January 1995), and all the various franchise books. Shortly after the Phalanx Covenant I’d had enough and just walked away from 20 years of continuity and over 400 comics.

I was pleasantly surprised by Uncanny X-Men: First Class #1.  Writer Scott Gray was able to refresh classic X-Men plot threads, without making them feel like retreads.  This series is set sometime shortly after The All-New All-Different X-Men #101 (Oct. 1976).  The team consists of Cyclops, Nightcrawler, Storm, Wolverine, Colossus, and Banshee, with Jean Grey/Phoenix as a supporting character.  This particular issue focuses primarily on Nightcrawler, but they dedicate some time to each team member.  In the issue Nightcrawler is feeling like an outcast due to his appearance (a well-established plot thread from the old days).  After a meeting between the X-Men and the Inhumans, Nightcrawler is invited to visit Attilan, the Inhumans city.  There Nightcrawler finds that feeling of belonging he’s been seeking all his life in this city of unique super-powered individuals.  Of course after that, things go awry and conflict ensues.  There was a decent cliffhanger and it appears from the solicits that the storyline will conclude next issue.

On the whole, the comic was well written and well illustrated.  There were a few moments of odd dialogue during a Danger Room training scene, but other than that Gray managed to capture the characters “voices” accurately.  I’ve never been a huge Inhumans fan, but it was a nice to see Nightcrawler’s plight in contrast with the Inhumans policy of acceptance.  Artist Roger Cruz did a fine job drawing the book.  It was neat seeing an essentially old school story drawn with modern style and techniques.  Cruz does a really nice job on faces and movement.

Surprisingly, I’ve decided that I will continue to collect this comic going forward.  While I enjoyed this issue quite a bit, at first I wasn’t 100% sold on getting back on-board with a monthly X-Men title.  There were three factors that helped me make my decision:  (1) The price for Uncanny X-Men: First Class #1 was only $2.99 for 22 pages of story.  In an era where Marvel is charging $3.99 for just about every brand new series, I was shocked to see the price tag of only $2.99 on this one.  (2)  Since this series isn’t set in modern day, there can’t be any crossovers.  No crossovers = no additional books to buy = no event fatigue caused by this book.  (3) Story arcs will be single issues or very short runs.  It appears that this will not be a book that consistently does six-issue story arcs just to ensure they can print a trade paperback.  Most of Marvel’s First Class books feature one-and-done stories, with the occasional multi-part story.  If I’m going to read an X-Men book again, I’d rather have short story lines than a long drawn out one.