Y’know, the attitude of a comic book store employee can really impact the future profitability of the shop. 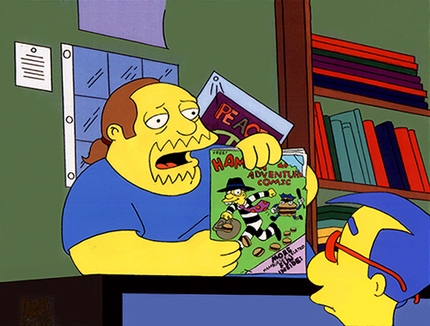 I’m of the belief that going to the comic book store is a fairly unique experience.  It’s a pilgrimage us hardcore comic geeks make once a week or so.  Most of us have some sort of pull/hold/reserve list at our local comic shop, so not only do they have the new comics we’re looking for, they’re already stashed behind the counter specifically for us.  That’s a pretty cool specialized service you don’t find outside the comic book industry.

In addition to our weekly haul, many of us are looking for some sort of camaraderie with the employees behind the counter.  Many are looking for a friendly face, others a shared interest in certain titles, or some want to debate who’s stronger – Hulk or Superman.  The important thing to realize is that your comic book store isn’t selling anything different from the comic shop down the street.  The one thing that can make a comic shop stand out is the relationship they develop with their customers.  We’re talking about customer service here.  A comic book store known for poor customer service is doomed to failure.  This is where the employees play a vital role in the continued profitability of a shop.

I’ve been out of town a couple times within the past few weeks.  Whenever in a different city, I like to visit new comic shops. I like to look for rare items, or perhaps a different display will attract my attention to something I’ve previously skipped over, or maybe I’ll get caught up in an interesting conversation/debate.  Regardless the reason, I always look forward to checking out new and different shops.

Recently I visited a comic book store in Savannah, Georgia and another in Jacksonville, Florida.  Sadly in both cases the employees were more interested in chatting with their friends than making an effort to engage the customers. It was really disappointing.  Both stores had just one employee working, and each were so involved in their discussions they barely glanced up to look as I walked in.  Neither said “Hello” or “May I help you” until I’d already been in the store almost a full ten minutes.  If the store had been busy, I might have been more forgiving, but in each case there were almost no other customers there.  When I finally approached the counter to make a purchase, I received the warmth you might expect from an apathetic cashier at the grocery store.  Needless to say, my overall experience at those stores was underwhelming.  Therefore, when I’m in those cities next, I won’t bother stopping by again.  There it is… the lack of customer service from the employee just cost them potential future profits.

It seems to me that too many comic shops hire fanboys as their employees.  While that’s fine in concept, I’d say you need someone that is half-fanboy, half-salesperson.  In the interest of full disclosure, I managed a comic book store for four years, so I’m biased and a harsh critic.  With that said, here are some tips I’d recommend to any comic shop owner:

Okay, I’m done ranting.  I’m just passionate about comic book stores and I can’t stand poor customer service.  For the record, I still shop at the same comic book store I worked at 15 years ago.  Ned and Lindsey do a great job at the Cosmic Cat (a.k.a. Mail Me My Comics.com) making the customers feel welcome.

Next time you go into your local comic book store, see how you are being treated.  You might realize how much they value you, or that they simply don’t care.

8 thoughts on “Comic Book Store Employees Can Ruin the Experience”