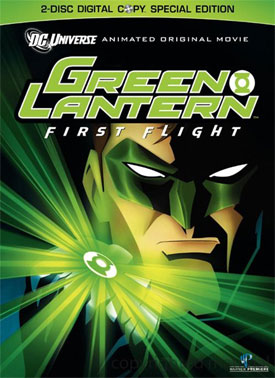 I finally picked up the DC Universe animated original movie Green Lantern First Flight on DVD.  While the trailers I’d seen looked pretty good, I just wasn’t feeling passionate about watching the film.  My apathy is centered on the lead character, Hal Jordan.  While I really like everything surrounding the Green Lantern concept and universe, I find Hal Jordan himself to be one of the most boring characters in DC Comics.  I grew up reading Hal stories, but never really felt energized by the lead character until Kyle Rayner came along.  So it was with some reluctance that I finally sat down to watch this DVD.

With my general feelings about Hal Jordan behind us, I gotta say this movie was great!  Don’t be fooled, this was a science fiction movie, not a comic book movie.  I’m using the term “movie” intentionally here, even though one could simply describe the film as a “cartoon”.  I categorize this as a “movie” due to the epic story and the real journey that played out across the 77 minutes of the film.

The basic framework of the story should come as no surprise.  Pilot Hal Jordan is given a mysteriously powerful ring from a dying alien which transforms him into the Green Lantern.  Hal discovers he’s one of an elite force of protectors who patrol the universe under the leadership of the Guardians of the Universe.  The antagonist of the story is Sinestro, formerly the greatest of the Green Lanterns, now a rogue wearing an enormously powerful yellow ring.  Again, no surprises here.  Beyond that, the story doesn’t stick to the established Hal Jordan origins shown in Emerald Dawn or the more recent Secret Origin.  It delves into some good science fiction concepts and explores the almost-reasonable motivation behind Sinestro’s betrayal.  Hal gets a chance to shine as the rookie Green Lantern and demonstrates why he’ll become the greatest of all Green Lanterns.

In addition to solid storytelling, this film is full of action-packed battles, science fiction imagery, and great animation.  The combat scenes are exciting and you can’t help getting caught up in them.  It will be interesting to see if the upcoming live action Green Lantern movie with Ryan Reynolds can match the action scenes from this animated version.  Lots of cameos by favorite characters from the Green Lantern universe: Kilowog, Tomar Re, Kanjar Ro, Ganthet, Boodikka, Carol Ferris, Arisia, Ch’p, and more. The voice acting was fine; no complaints, but no stand-out performances either.  While the film is rated PG-13, the only thing to watch out for with the kiddies is some intense combat/gore and a little bit of language.  Nothing that an advanced 10 year old couldn’t handle.

The only disappointing thing in the movie was the lack of character development for Hal Jordan himself.  I promise I’m not being biased here against Hal.  While Hal did lots of cool things in the movie, you never really got a sense of who Hal was or where he came from.  Without really noticing much difference, you could have interchanged Hal Jordan for Kyle Rayner, or John Stewart, or Alan Scott, or even Charlie Vickers (anyone remember him besides me)?  It didn’t detract from the film tremendously, it just made it harder to connect with the character.

If you haven’t seen it, below is the official trailer for the movie.

For more on the movie, visit the official website by clicking here.

I picked up the Target exclusive two-disc special edition DVD, which includes a free digital download copy of the film.  I love the whole digital download concept!  This is such a great enhancement for DVDs nowadays.  Additional special features include:

While I was fairly pleased with the special features in general, I was disappointed there was no audio commentary and no in-depth featurette on the making of this animated movie.  Missing these didn’t spoil my day, but I would have liked them.

Overall, this was a fun science fiction movie with great action and visuals.  I recommend it!