Dynamite is releasing a new comic book mini-series this September based around the failed spin-off Galactica 1980.  Seriously?  Somebody, somewhere thought this was a good idea?  Galactica 1980 was the universally-despised sequel to the original Battlestar Galactica TV series.  The show lasted a whopping 10 episodes, while the original Battlestar Galactica lasted 21 episodes.  Writer Marc Guggenheim is reimagining the Galactica 1980 story, so hopefully he can ignore things like Cylons being disabled simply due to their proximity to a microwave oven.  While he’s reimagining the story, it seems he’s still sticking with the same characters and likenesses; he’s not going to incorporate the modern-day Battlestar Galactica items into the story.  In fact, the cover to issue #1 is total photo reference rip-off of the Galactica 1980 DVD (see below). 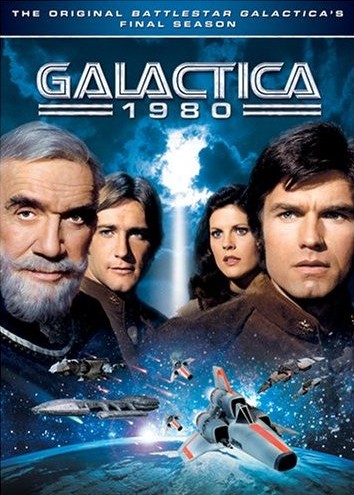 All kidding aside, I’m a bit of a sucker for Galactica 1980.  I can’t explain it, but I really enjoyed this series as a child.  Perhaps it was the ridiculous flying motorcycles or the invisible vipers, who knows.  Regardless of how silly the overall series was, the final episode “The Return of Starbuck” was quite good. It was a decent send off to a cool character.

Newsarama has an in-depth interview with Marc Guggenheim about the Galactica 1980 comic mini-series.  It’s a good article and worth checking out.

If you’ve never seen the original Galactica 1980 series, check out the fun montage video below. And regardless of what the video says, it lasted 10 episodes.